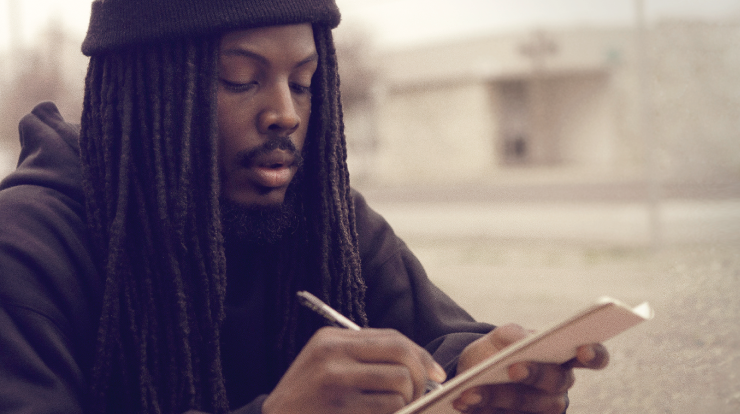 Donté Clark writes about love sprung from hate in Romeo is Bleeding.

The award-winning documentary, Romeo is Bleeding, will be shown at the Neutral Zone Teen Center on Wednesday, June 1 at 7:00 pm.

Director Jason Zeldes’ film is about the turf war that haunts the youth from Richmond, CA. Forced to live in the middle of this war, activist and poet Donté Clark and his courageous band of teen poets decide to create a contemporary adaptation of Romeo and Juliet set in their embattled home town. The film takes us on a dramatic journey of creative expression through performance art in an attempt to bring change and hope to a community.

Donté Clark, who is the inspirational focus of the film, will be giving a talk along with his mentor and Neutral Zone Alumni Molly Raynor.

Romeo is Bleeding has earned numerous awards across the festival circuit, including Best Documentary Feature at the San Francisco International Film Festival.

Laura Pershin Raynor is a Youth and Adult Services Librarian at the Ann Arbor District Library.

Romeo is Bleeding, will be shown at the Neutral Zone (310 E. Washington Street, Ann Arbor, MI) on Wednesday, June 1st at 7:00 pm. The event is free and open to the public.