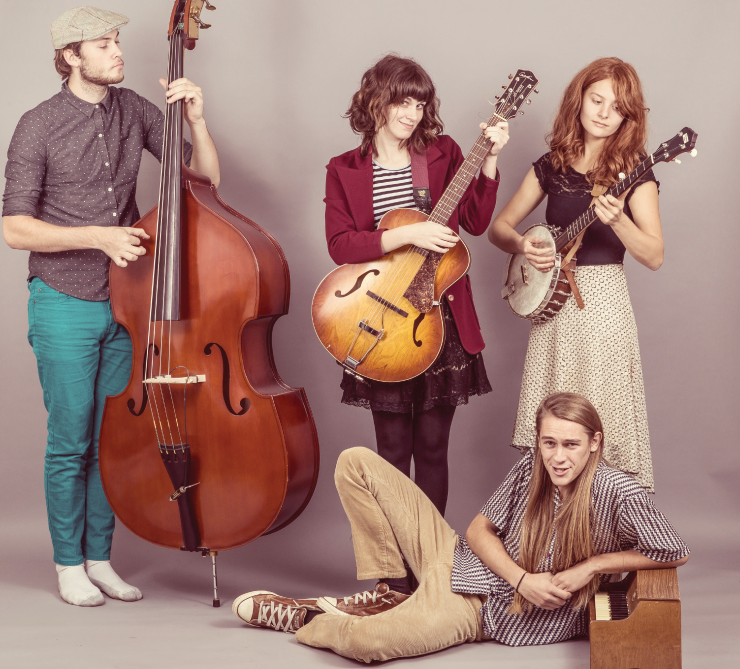 Mainville and company will swing at the Pig and Cultivate this weekend.

20-year-old Holland-based singer, songwriter, and multi-instrumentalist Olivia Mainville is busier than most musicians ten years her senior. In the past two years she played with the folk-rock band Watching for Foxes, collaborated with The Appleseed Collective and The Ragbirds, toured as a solo artist supporting Connecticut’s Caravan of Thieves, released a debut EP that was mixed in Nashville, volunteered as a programmer for Grand Rapids’ WYCE-FM, and started her own band, Olivia Mainville and The Aquatic Troupe.

Given the restless blur of Mainville’s career to date, it’s appropriate that her new band’s debut album — “Maybe the Saddest Thing,” which was recorded in April 2015 and released last December — resists categorization. Mainville cites Sufjan Stevens, Katzenjammer and Django Reinhardt as key influences, and her latest record also features splashes of folk, baroque pop, alternative rock and ragtime. With so many flavors in the mix, Mainville has had to coin a new term to summarize her band’s specific genre (or lack thereof): “gypsy swing folk.”

Mainville and her band will bring their rollicking live show to the Blind Pig this Saturday and Cultivate Coffee and TapHouse in Ypsilanti on Sunday. I caught up with Mainville to talk about going solo, managing her own band, and playing most of the instruments on her latest record.

Q: You played in various other bands before playing your own songs live and eventually forming the Aquatic Troupe. When did you decide to take the leap to start focusing on your own original material?
A: I joined a couple of other bands, but it never filled up the time like I wanted it to. We didn't have that many shows with the bands I was in. I wasn't really like totally into the music. It was one of those things where you're joining it because you can, and because they want you. It's not necessarily because you're super passionate about it. Obviously everybody's going to be a lot more passionate about their own craft, or at least most people. So in this case I was more passionate about my own craft, and I decided to pursue it on a new level.

Q: What was the first instrument you learned to play?
A: I started playing music in the fifth grade. I picked up the viola in orchestra. Basically I did it because I wanted to look really cool. I wanted to be one of those cool kids holding a viola case [laughs]. None of the other elementary school kids got to do that, unless you were in orchestra. I was in orchestra for four or five years, and I switched to the upright bass in high school. And then eventually I picked up the mandolin, which is actually in the same key as a violin, so it wasn't too different. And then I traded my upright bass for a violin. Then I picked up a guitar.

Q: How do you describe the kind of music you play with your band?
A: I describe it as "confused” [laughs]. We're actually starting to get more of a defined genre, although it doesn't present itself too well in the music right now. We're more a swing, jazz, ragtime and surf party band, now more than ever. But we also have our old songs, which are maybe more indie rock oriented. We're definitely leaning more towards the whole swing vibe now.

Q: There are so many different styles of music on your most recent album. Is that all you, or do you open your songs up to influences from the other band members?
A: 90 percent of the record was my bandmate Andy [Fettig] and I. He did all the trumpet, flugelhorn, and I think he did some saxophone on there. And then we had Bleu, my trombone player, and at that time he wasn't really too much in the band so he only laid down a couple tracks. Other than that I did all the strings, the accordions, the guitars, and the vocals.

Q: That's surprising, because the record has such a full, immediate sound, like a full band in a room locked into a groove. Can you tell me more about the process of making the record, where you recorded it, and how long it took to put it all together?
A: Before we started to record, I had kind of a different band. We had one different member, and we were only playing as a three-piece. We got together, chose the songs we were going to play, and we got together 10 days before we went into the studio and we rehearsed the all songs every day, added parts, and figured out all the other stuff so we could have a successful recording session without wasting any time.

We recorded it over the course of four days, but we had some problems with our drummer so we had to kick him out of the band. We re-did a lot of the drum tracks. We actually got it done last year in April, but we kept going back, which postponed it until about December. We kept adding things to it, and we kept finding things we didn't like and wanted to make different. We kept going back into the studio. 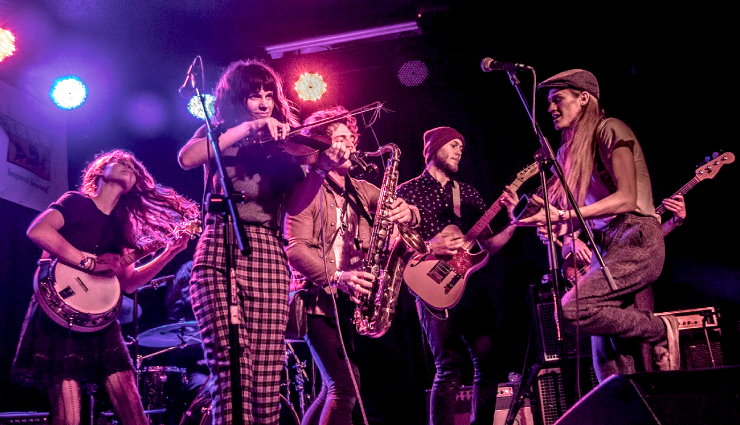 Q: Gerry Leonard, David Bowie's former musical director and lead guitarist, plays on the record. How did that come together?
A: I watched him a long time ago with Suzanne Vega, and I had talked to him a couple times as well and he was a really nice guy. I emailed him and I asked him if he would record on a track of ours. We decided that we wanted to make it an 11-track album, so I recorded the song "I Need Time" specifically for Gerry Leonard. I needed to write a song that worked with his style, and it was a great success. We actually just sent him the stem cells. He took it, recorded it, and it came back perfect.

Q: What else are you juggling in addition to your musical career? Do you have a day job? Are you in school?
A: I do a lot of yard work [laughs]. I also take lessons. I'm taking guitar lessons right now, and I'm about to take vocal lessons, because you can never stop learning. I'm also the booking agent for my band, so I book all the gigs. We're not run under any management, so all the money stuff and whatnot is all up to me. I book, I order the merch, I pay for the recording sessions, all that other stuff.

Q: That's impressive. Was there anybody who helped you along and showed you the ropes for how to do all of this yourself?
A: When I was 17 I got invited to go on a little tour with a band called The Accidentals. I played as their merch girl and roadie, so I helped them pack up, I help them load in, I sold their merch, and all that. I learned from them for a while and then I got invited to live with them for a summer and play a bunch of shows and stuff. Their manager Amber showed me the ropes and told me how to pretty much run a business. Everything was pretty strict and serious, which is what it should be, and I learned a lot. It definitely played into how I run things now.

Q: What's it like performing outside of the safety net of your home state, away from your friends and family and the local musical community? Is that intimidating?
A: If I think about it too much it seems a little intimidating. It's always different. You never have the same crowd for any show. It's always interesting. You definitely play some not-so-great shows when you're out on tour, but we've also played some pretty nice ones where we had a really good response from people. But you get those ones where you get three or four people show up [laughs]. Every band has to go with that, unless you're super famous.

Q: What do you see in the future for your band? Do you have any kind of plan for where you want to take your sound, or how you might approach your next batch of songs?
A: We're definitely more for a rowdy crowd. In the future I would love to play to a lot bigger crowds, jazzy themed bars, stuff like that.

We're actually writing new songs now. We have four new tunes we're working on recording. We already have two down. We want to come out with another 10 song album, hopefully before December. We want to work with a guy named Adam [Schreiber] from Jack & the Bear. He does a very cool style of recording, very old sounding. It kind of works with the new genre we're going with. We already have one of our songs recorded. We're waiting for it to get mastered, and we'll release it out to the public.

Steven Sonoras is an Ypsilanti-based freelance writer. Olivia Mainville & the Aquatic Troupe play the Blind Pig on Saturday May 14, supported by Sedgewick, Jason Dennie, and Nadim Azzman. Doors are at 9 p.m. The Blind Pig is located at 208 N. First St. The show is 18 and up, and tickets are $8 in advance and $10 at the door.

The band will also open for Sedgewick at Cultivate Coffee and TapHouse on Sunday, May 15. Cultivate is located at 307 N. River in Ypsilanti. There is no cover, and the show will run from 5-8 p.m.