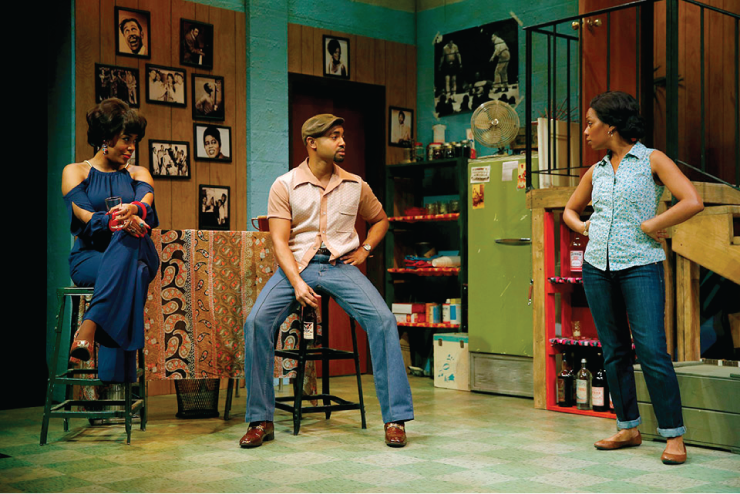 Production photos from the Public Lab production of Detroit ’67.

We usually think of the 1967 Detroit riot in big-picture terms: the 43 killed, the 7,000 arrested, the 2,500 buildings looted or burned, the way the event sparked white flight and economic troubles that continue to affect Detroit today. Given the nearly half-century that’s elapsed since the five-day uprising, it’s not often that we examine the event in any kind of personal way. Playwright (and University of Michigan grad) Dominique Morisseau realizes this and smartly counter-programs against it in her lively drama Detroit ’67. The smartly crafted and performed show bottles up the tension and strife of the riot in a single family’s basement while violence rages outside.

Detroit ’67 focuses on Lank (Amari Cheatom) and Chelle (Michelle Wilson), a brother and sister who run a dance club in the basement of their recently deceased parents’ Detroit home. Chelle’s levelheaded practicality often conflicts with Lank’s aspirations for the siblings to rise above their modest social status and open a proper bar, and the siblings’ outrageous friends Sly (Brian Marable) and Bunny (Jessica Frances Dukes) only stir the pot. Lank’s plot to purchase a neighborhood bar is derailed when he impulsively brings home Caroline, a badly injured woman (Sarah Nealis) who begs Lank’s help. Caroline, who is white, ignites a powderkeg of anxiety amongst the otherwise African-American characters–and that’s before the streets outside even start to burn.

The production is hauntingly intimate, never once showing us what’s going on outside but vividly demonstrating the way it affects our very small cast of characters. The most unexpectedly crucial element in this production by Baltimore’s Center Stage theater company, presented here by special arrangement with the Detroit Public Theatre, is the painstakingly detailed set. Scenic designer Michael Carnahan crafts an onstage basement that will be completely familiar to any Midwesterner, from the cinder-block walls to the chest freezer to the canned goods stored in the rafters. The period details, too, are impressive. Family photos hang alongside a vintage Tigers pennant, a photo of Malcolm X, and a World War II-era poster of Joe Louis which declares, "We're going to do our part...and we'll win because we're on God's side."

There’s an unquestionable veracity to the setting, and it heightens the actors’ achingly real performances. Whenever Wilson, Cheatom, Marable, and Dukes are onstage, there’s a completely genuine feeling of family between them. The actors breathe life into Morisseau’s already naturalistic dialogue, underpinning even the scenes of high conflict between their characters with warmth and love. Dukes and Marable slowly round out characters that initially seem to be mere comic relief, playing beautifully whether they’re delivering one-liners or tackling scenes of much more gravity. Cheatom has poise and grace as Lank, neatly underplaying the boiling frustration that feeds his character’s optimism. But Wilson is the true MVP of this cast, giving a deeply-felt lead performance that registers with absolute authenticity in every moment. In the play’s dialogue-free final moments, Wilson’s face summons decades of hope, happiness, and heartbreak in the incredibly affecting climax to a masterful performance.

The production’s weaker points are those where it tries too hard to drive already clear points home, ranging from smaller issues of character to larger ones of theme. Nealis’ Caroline never quite connects as a real character, partly because of the actress’ stagier performance and partly because director Kamilah Forbes blocks Nealis in almost constant motion. Forbes attempts to demonstrate the character’s skittishness, but Caroline comes off as too mercurial and unnatural as a result. Similarly, Morisseau occasionally goes a little too far in blatantly pointing out some of the broader themes of her story. And while the parallels between the Detroit riot and recent protests against police violence in Baltimore and Ferguson, Mo., are already all too clear, the production’s brief usage of projected footage from very recent news events borders on crass.

These are smaller problems, but they become more conspicuous because the show is otherwise so successful in what it sets out to do. It narrows our view of the riot to five characters in one basement, but in doing so makes the historical event–and the contemporary social problems that echo it–breathtakingly relatable. It rejects the big-picture view of the riot, but theatergoers–particularly white, middle- or upper-class theatergoers like this reviewer–will walk away with a much deeper understanding of the event. The fledgling Detroit Public Theatre has closed an impressive inaugural season with this show, and it could scarcely be more appropriate as a simultaneous tribute to Detroit and critique of long-running social issues here and throughout the nation.

Patrick Dunn is an Ann Arbor-based freelance writer whose work appears regularly in the Detroit News, the Ann Arbor Observer.

Detroit ’67 will run through June 5 at the Max M. Fisher Music Center’s Allesee Hall. Tickets are available online, by calling (313)576-5111, and at the Box Office before the performance.