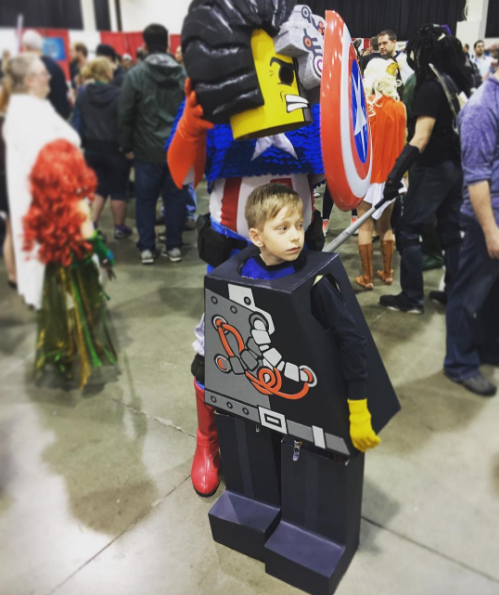 Comic fans and cosplayers swarmed Motor City Comic Con this past weekend in Novi. The event draws tens of thousands of people and features elaborate costumes, comic book and art sales, and the opportunity to meet celebrities from various TV shows and movies of the past seventy years. Although the only comic books that I grew up with were about Betty and Veronica fighting over Archie, and I only know superheroes from the Avengers movies, I gamely dressed as Captain America and went to this year’s Comic Con to see what it was all about.

Even attendees who are more familiar with the comics world than I are often most excited to see the fantastic cosplays (comic con abbreviation for “costume play”) that people create to wear to the convention. For me, people watching and admiring the elaborate costumes of my fellow CC participants was definitely the best part, too. Although I wasn’t able to recognize some of the more obscure characters, the time and effort that went into many of the costumes was awesome to see.

Of course, there were lots of Harley Quinns, Game of Thrones characters (particularly Daenarys), and Captain Americas — my DIY costume paled in comparison to the people in full vintage Army gear carrying the original Captain shield — but there were also a number of female Lokis, a team of people dressed as Fallout fighters, and someone who we initially thought was Prince Robot from the Saga series, but turned out to be from the webcomic RGB Property of Hate. Not all the costumes were comics or gaming related, either. Two men were dressed as Tom Cruise and Jack Nicholson, seemingly for no other reason than that they looked shockingly like the two actors. The open, welcoming atmosphere is one of the best parts of Comic Con; people were more than happy to pose for photos and strike up conversations with one another about their costumes. People staged lightsaber and bow and arrow battles, Dr. Whos posed with blue TARDISes, and Storm Troopers and Red Shirts together bemoaned their laughingly quick and easy deaths.

MCCC is also a mecca for people seeking — of course — comic books. The cavernous space in which the convention is held was over half-filled with aisles of comic book vendors, selling issues ranging from $1.00 for four to over $500 for a single rare back issue of a Batman comic. To truly peruse all the comic book stalls would require spending the entire weekend at MCCC… and even then one might feel rushed. I was a particular fan of the art booths at the festival as well. Dozens of artists—including local artists Jeremy Wheeler and Jason Gibner—showcased their art in various mediums. The art often featured unique interpretations of various well-known characters and emblems from comics and films, and included hand-sewn Chewbacca puppets, blown-glass Game of Thrones dragon eggs, steampunk pocket watches and paintings and posters of all types. Oddly, I even acquired a 1970s print of the state of Michigan with elaborate watercolor-esque images of various Michigan-related things surrounding it, so even for those of us who weren’t necessarily there for anything comic-related, there was worthwhile shopping! 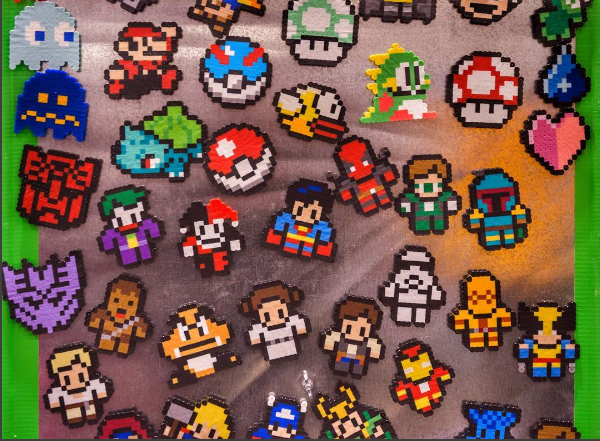 One of the bleak areas of the convention was actually the portion where one could wait in line to meet celebrities. Aside from the exorbitant price to have a minute-long conversation with any one celebrity, many of the more obscure people sat forlornly as no one approached their table. Sure, there were long lines for Lena Headey (of Queen Cersei fame), but it was depressing to see people like Tara Reid and Adam West sitting alone for hours as people wandered past without giving them a second glance. It was almost surreal to walk along the empty aisles, while the “stars” sat about 30 feet back from the main thoroughfare against a backdrop of white curtains staring disinterestedly into space, guarded unnecessarily by bored-looking security personnel in neon vests. I escaped that portion of the convention as quickly as I could.

Overall, I was surprised and pleased by how much fun I — a first-time attendee at a comics convention who really doesn’t know much about comics — had at Motor City Comic Con. If nothing else, the people watching is truly worth the price of the ticket. I’m already planning my cosplay for next year. Hopefully it involves wings.

Elizabeth Pearce is a Library Technician at the Ann Arbor District Library. Captain America is her favorite Avenger.

Motor City Comic Con happens each May at the Suburban Collection Showplace in Novi. Although the con is over for this year, the organizers host other smaller conventions and shows throughout the year.