PREVIEW: A2CAF: The Comic Show That Wants To Change Your Life

The Ann Arbor Comic Arts Festival is this weekend at the Downtown Library.

These days, comics are everywhere. Superheroes dominate the silver screen. Graphic novels burn up the best-seller lists. And of course, comic-cons are a nationwide craze.

But graphic storytelling is about more than comic commercialism. And this weekend, the Ann Arbor District Library is presenting a lineup of some of the most popular cartoonists with young readers and a slew of local talent to deliver an event more about passion for comics than profit: the Ann Arbor Comic Arts Festival.

Taking place Saturday and Sunday at the library’s main branch, A2CAF (as the show is known for short) is the continuation of the popular event formerly known as Kids Read Comics. The 2016 edition of this free festival not only brings over 50 comic creators to its "artist's alley" area to share their work with school-aged readers and their families – it will also host dozens of hands-on creative workshops all over downtown. And in a special Friday event, the show will welcome librarians and teachers to meet with the talent so they can boost their own comics bona fides. All in all, the guests and programming will work to build a love of the medium in all its attendees.

"Our ethos is 'A life can be changed by comics.' Mine was," explains A2CAF co-founder and organizer Dan Mishkin. And he should know. The Michigan-based writer spent years crafting stories for DC Comics including runs with Superman and Wonder Woman in addition to being co-creator of heroes like Blue Devil and Amethyst, Princess of Gemworld (which was recently adapted as a series on Cartoon Network). The A2CAF team hopes to inspire a new generation of comic lovers. As Mishkin says, "You don't have to be a professional for your mind to be opened up by comics."

Getting the community excited about the medium starts with the all-star lineup of cartoonist and writers. This year, the keynote presenters will be the creator of the Newbery Honor-winning graphic novel El Deafo Cece Bell and her husband Tom Angleberger who is the mastermind behind the Star Wars-themed Origami Yoda series, amongst other books. Joining them on the show floor will be acclaimed artists like Kazu Kibuishi (Scholastic's popular Amulet series), Ben Hatke (Zita The Spacegirl), and the team behind Oni Press's hilarious new comic BroBots, J. Torres and Sean Dove. 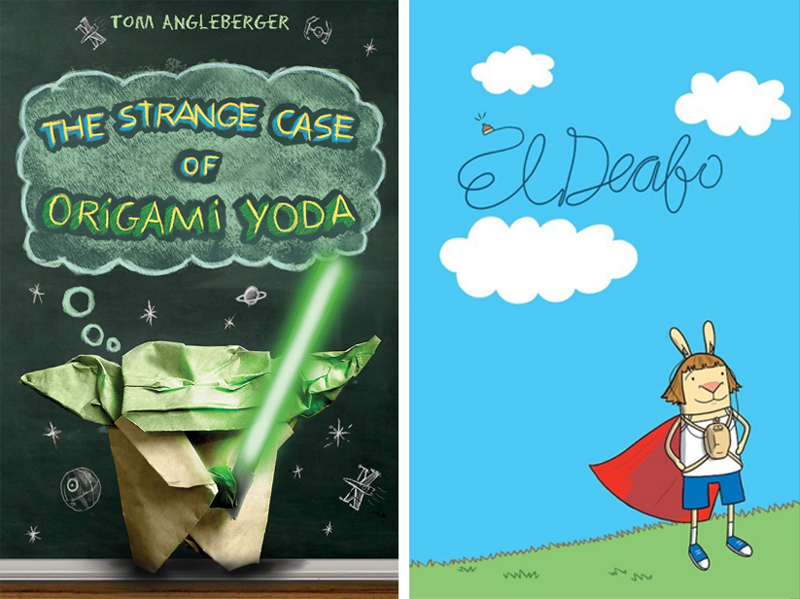 The organizer is also keenly aware of how much local flavor has been added to the show over the years. "Maintaining a variety is something that's really important to us, and it involves finding local people and being responsive to that," he explains. "We're always refining the mix of guests. It's not just about the professionals. It's about both the New York Times bestseller and the local person who's just starting out. You'll see a lot of Southeast Michigan and mid-Michigan creators who have a day job, but they're doing their webcomic on the side. It works out really well for them and for us to give them a showcase."

But as all artists presenting their wares at the show get to table for free, the organizers have an expectation for what the talent bring to the festival. "You need to represent what we're all about. I only half-jokingly say 'We don't care if you sell anything at your table.' Because for us, it's much more important that the artists engage with kids and teenagers and parents and teachers and librarians so that the passion for comics comes across."

That love extends into A2CAF's second major feature: its wide range of programming. Across the weekend, the library itself will hold comics-making workshops, a ceremony for the kids-focused Dwayne McDuffie Award, and signings for some of the biggest talent on hand. And on Friday, the A2Inkubate unconference will present educators and librarians with a chance to collaborate on methods for bringing comics to their students. But beyond that, programming will also pop up across downtown at spots including the Vault of Midnight comics shop, the 826 Ann Arbor Robot Supply & Repair storefront, and the Ann Arbor Art Center.

"It just makes sense to share the event with organizations with whom we share a mission. We're all in a Venn diagram of these things," Mishkin says. "It's really about turning young people onto having a passion for comics and doing it in a non-commercial setting with a lot of hands-on experience. During the show we're really, really hands-on. It's all about getting kids and teens to learn how to make comics. [Local cartoonist] Matt Feazell has his wonderful 'How To Make A Mini Comic' 90-minute workshop, which is so great, and there are other things that are geared towards different levels of ability. Some are geared towards storytelling, but one of the great revelations about doing these workshops is that kids are not inhibited about drawing. They just go ahead and do it.

"We're very much focused on hands-on workshops, and we also have programming that fits into the category of 'spectacle.' So if you're shy or somewhat inhibited, you can sit in an audience and watch artists compete with each other as they draw improvisationally. You can even shout out suggestions for what they can draw. And it always turns out that the kids that moms and dads think are inhibited get really into shouting out ideas for the cartoonists. We keep it fun, and there's a low barrier to participation."

That idea of an easy path into comics is what started the show now known as A2CAF. In 2009, the nonprofit called Kids Read Comics that runs the show launched their first event at the Chelsea District Library. And in 2016, the shift in name from Kids Read Comics to Ann Arbor Comic Arts Festival represents a fulfillment of the team's mission. "I think the change in name means very, very little about [any kind of change in] the character of the show. It's an attempt to better state what we've been about all along," Mishkin explains.

For those curious about the festival's shift, the organizer explains that one key element of the previous iteration wasn't working. "Teenagers don't like being called 'kids.' With a distance from being a kid or a teenager myself, I failed to see that there was going to be an off-putting message in the word 'kids' for some of the people we really wanted to bring into the show. It was never our intention to say that teenagers shouldn't be involved. It was very much our intention that they should be there. They should be there to find really cool stuff, but if the name pushes them away, that's a big problem.

Kiel Phegley is an Ann Arbor based writer, and teacher. His work has been published by CBR, Wizard Magazine, Publishers Weekly, Marvel Magazines, MTV Blogs, and many other print and web outlets.

So happy to see this weekend

So happy to see this weekend continue to grow and expand beyond the library into the streets and shops of A2! This has become a highlight of the summer for my whole family.