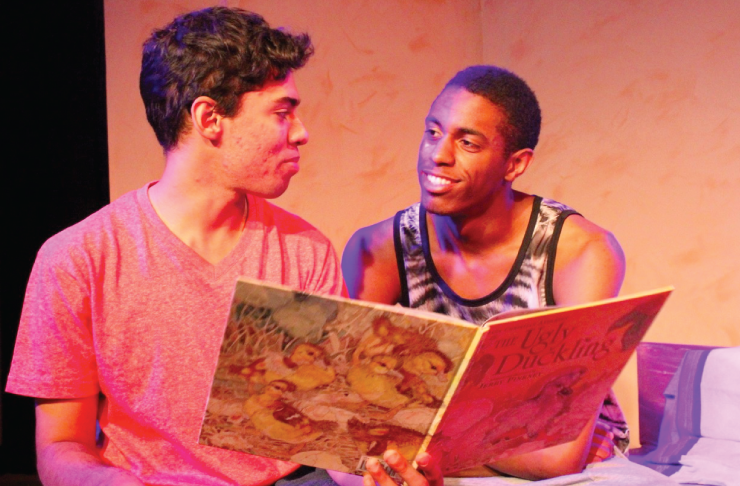 Mila – a gay, black/hispanic teen in Emilio Rodriguez’s Spin, now having its world premiere at Theatre Nova – greets the enrichment programs at his homeless shelter, as well as the world outside, with measured skepticism.

“They try to get you with the root beer floats. Then you have to learn something,” he says.

The young men vacillate between vulnerability and guardedness with each other throughout the show’s 80-minute run time, gingerly navigating a minefield of masculinity. Both spin self-defensive lies as well as rhymes: Angelo with his verses – which he presents to the audience between scenes, thus providing the play’s connective tissue – and Mila with rap.

But Rodriguez’s script also takes pains to remind you how young and naive these two characters are, despite their hard pasts and bluster. Mila explains, for instance, that if he ever has kids, of they were misbehaving, he’d simply tell them to knock it off. “They’ll stop, and they’ll be grateful I stayed,” he says. (This got a pretty big laugh on opening night.) And when Angelo explains that he has an alternate identity he adopts in moments of stress, Mila settles in to watch the transformation, as if expecting an act of magic to occur. In these moments, we know they’re just boys grown tall.

Daniel C. Walker designed the show’s set, consisting of little more than a back wall with a window (through which Mila sneaks out, returning later with handfuls of crumpled-up bills), two angled beds, a small, shared nightstand, and mini-dressers; Alona Shewach designed the props, keeping in mind what items these adrift young men might each choose to keep from their past. Indeed, the modest, spartan nature of the entire space makes the opening scene work, since Mila gets angry at seeing Angelo’s duffel bag on “his side.”

These two don’t feel they have a claim on much space in the world, so Mila’s become accustomed to fighting to keep the little bit he’s granted.

Walker also designed the show’s lights, which mainly shift from room scenes to Angelo’s poetry readings. (Sound designer Carla Milarch provides an aural backdrop for these readings.) But it’s Rodriguez’s funny, thoughtful script, and the performances that director Kennikki Jones gets from her actors, that ultimately make Spin a winner.

Martinez and Matthew Webb play off each other beautifully. From the start, there’s a profound contrast in their vocal cadence and posture and movement. Webb, tall and lean, initially armors himself with anger and cynicism, while Martinez conveys a more softspoken openness that slowly chips away at Mila’s walls. When Mila finally trusts enough to ask Angelo to read to him, you know that a significant milestone has been reached.

And Rodriguez is skilled enough to both earn it and avoid a too-easy ending. Though some of the play’s interludes felt like padding, instead of a means of providing new insights into the characters and their situation, I nonetheless felt a real sense of discovery regarding this Detroit-area playwright.

Plus, in the wake of the heartbreaking massacre in Orlando, wherein Mila and Angelo would have been among those targeted, it just feels right to stop talking for a while and instead listen closely to what they have to say.