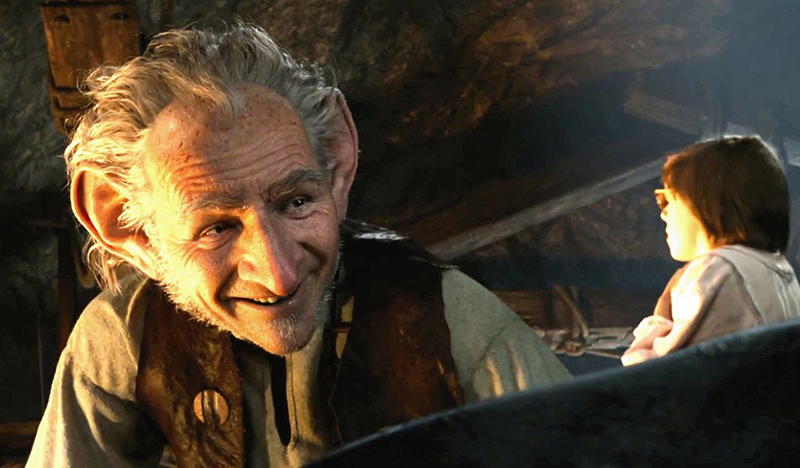 The BFG, all Dahl'd up in CGI.

Fans of Roald Dahl's 1982 children's book The BFG will find that source text replicated lovingly in Steven Spielberg's new film adaptation–occasionally perhaps with even more detail than they wanted.

Spielberg restages Dahl's tale almost beat for beat, as the stubborn orphan Sophie (Ruby Barnhill) is swept away from her orphanage one night by a big friendly giant, or "BFG" (Mark Rylance). The BFG makes an occupation for himself capturing dreams and redistributing them into "human beans'" heads by night, and he takes Sophie back to Giant Country with him for fear she'll expose him to the world. Sophie warms quickly to the plight of the loving but somewhat dimwitted BFG, who is harassed constantly by nine man-eating and considerably larger giants (a voice cast led by Jemaine Clement and Bill Hader). As the giants devour humans by night and plague the BFG by day, Sophie hatches a plan to stop them, requiring the assistance of no less than the Queen of England (Penelope Wilton) herself.

It's a common complaint that cinematic adaptations of books deviate too much from their source material, but there are pitfalls in holding too much reverence for the original text as well. Screenwriter Melissa Mathison, who penned classic family flicks including The Black Stallion, E.T., and The Indian in the Cupboard before her death last year, translates Dahl's material to the screen almost directly. The film thankfully wastes no time revealing its title character and whisking Sophie away with him, but from there it occasionally bogs down. Mathison and Spielberg place Dahl's material on a pedestal and just leave it there to be admired at unnecessary length.

This tendency is persistent throughout the first two-thirds of the movie, most noticeably in an initially lovely but ultimately overlong scene in which the BFG and Sophie collect dreams. The film develops some momentum, and some of its greatest comic energy, when Sophie and the BFG take off for Buckingham Palace, but it takes quite a while to get there.

The two leads are so excellent throughout that you'll wish one of them were more physically present. Barnhill, whose previous filmography includes just six episodes of a British children's TV series, comes off very well here. Not just your average precocious young lead, she plays Sophie with a mature self-assuredness that still has just the right undercurrent of childish vulnerability. Rylance, coming off a well-deserved Best Supporting Actor Oscar win for Spielberg's Bridge of Spies, makes an extremely endearing BFG, gently enunciating the character's goofy malapropisms.

How unfortunate, then, that Rylance's performance is motion-captured and his BFG entirely computer-generated. The character is convincing in certain moments–particularly in close-ups, where the effects team appears to have smartly concentrated its efforts–but surprisingly wooden in others. Given Rylance's physical resemblance to illustrator Quentin Blake's original rendition of the giant, which the film closely mimics, Spielberg's decision to create a CGI giant instead of using more practical filmmaking magic to put Rylance onscreen in the flesh is rather perplexing.

Ultimately, Spielberg and Mathison's heads are basically in the right place when it comes to this material. They understand Dahl's sense of humor and his essential warmth, although they also don't shy away from the brutality that underlies much of his work. They just make the mistake of putting too much effort into bringing Dahl's simple but vibrant story to life, whether lingering too long over minor details or throwing millions of dollars in effects money at creating CGI giants where practical effects would have worked better. In the end, The BFG is certainly not a bad movie; it's often charming and sometimes even delightful in its own right. But its humbler source material tops it in both those departments–and you can probably read it in less time.

Patrick Dunn is an Ann Arbor-based freelance writer whose work appears regularly in Pulp, the Detroit News, the Ann Arbor Observer, and other local publications. If he were a giant, he would certainly choose to eat snozzcumbers rather than small children.

The BFG opens in theaters on July 1 .