Review: Fanfare Ciocărlia Lives Up to the Hype 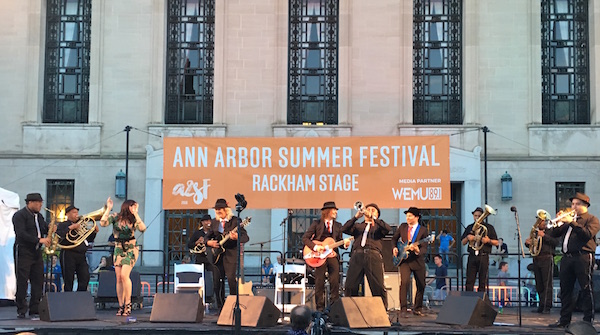 Fanfare Ciocărlia rips it up at the Ann Arbor Summer Festival.

While interviewing Ann Arbor Summer Festival director Amy Nesbitt a few weeks ago, this Pulp correspondent was a bit surprised that Nesbitt designated the Romanian brass band Fanfare Ciocărlia the number-one can't-miss event of this year's festival. In a lineup that included not only major stars like Bruce Hornsby and Bebel Gilberto, but also local powerhouses like Third Coast Kings and George Bedard, who were these Romanian guys exactly?

As it turns out, Fanfare Ciocărlia is known as one of the world's greatest modern purveyors of Balkan brass music, and the ensemble more than lived up to its hype in a blistering performance Thursday night. Seven of the band's 12 members took the stage alongside Canadian guitarist Adrian Raso (with whom Fanfare Ciocărlia collaborated on its most recent album) and Raso's own traditional three-piece rock band. Things got off to a slightly rocky start, as the entire 11-piece ensemble stood around onstage with positively dour expressions during a lengthy sound check.

But as soon as the sound crew finished setting up for the small musical army onstage, the ensemble wasted no time ripping into its first number. Uptempo, minor-key, and thoroughly danceable, the opening tune set the template for much of the repertoire Fanfare Ciocărlia tore through Thursday night–and the band scarcely even allowed the audience to applaud before leaping into its second number.

When the band finally paused for a moment's breath, Raso told the audience that the band would be journeying "deep into the Balkans" in a program entitled "Devil's Tale." But he promised tastes of other cultures as well, and Fanfare Ciocărlia delivered throughout a 70-minute set. The brass instruments left the stage at one point while Raso and his group performed a lively Italian tarantella. Later, the full band performed a Django Reinhardt-inspired gypsy jazz tune entitled "Eric the Baker" (named after a bakery in Raso's hometown of Guelph, Ontario). The most surprising diversion came when the band played "Devil's Tale," a stomping American country-inflected tune, which Raso dedicated to Elvis Presley's recently deceased guitarist Scotty Moore. 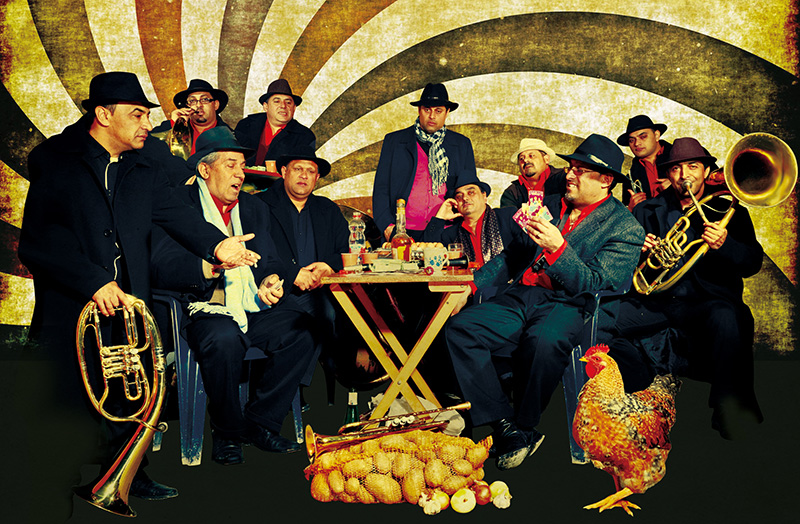 Raso led the audience through the night with gentle, humorous banter and astonishingly versatile guitar work, executing breathtaking solos on classical and electric guitars while leapfrogging from musical style to musical style. Fanfare Ciocărlia distinguished themselves beautifully throughout, playing with energy and a knowing collaborative instinct born of their 20 years on the road together. The band blasted through dizzyingly uptempo horn riffs song after song, often ending tunes with a long, slightly dissonant, unresolved chord as they grinned widely to each other. Saxophonist Oprică Ivancea, a noted performer in his own right outside of Fanfare Ciocărlia, was a standout in the band both for technical prowess and physical presence, leaning back dramatically for one breathtaking solo late in the show. Trumpeter Costică Trifan was also an engaging figure onstage, singing several tunes and frequently inciting the audience to dance and sing along.

Throughout the show, one got a sense that Fanfare Ciocărlia very literally fed off its audience's energy. Although the band started things off with a bang, the energy onstage only increased over the course of the performance, in tandem with the energy on the dance floor. The bustling crowd was often just as entertaining to watch as the performers onstage. Strangers of all ages repeatedly formed line dances of up to 15 people. One couple tangoed almost incessantly, intensely eyeing each other with a blend of goofy humor and genuine adoration. Fanfare Ciocărlia put on an incredible show for Ann Arbor, and its audience responded in kind.

It would be deeply unfair to end this review without also noting the contributions of Fanfare Ciocărlia's unofficial opener Thursday night: Ann Arbor's own Balkan brass band, Rhyta Musik. Frontwoman and Trombonist Bethanni Grecynski warmly interacted with the audience, explaining the historical background behind each song and singing into a bullhorn, while local man-of-many-bands Ross Huff provided particularly distinguished trumpet work. Rhyta Musik got the dance floor well warmed up for Fanfare Ciocărlia and proved that Ann Arbor can hold its own even against the Romanian kings of Balkan brass. Thursday's night of multicultural energy was indeed a standout for Summer Fest 2016, a night so beautiful as to prompt a pang of sadness that our community's go-to summer event has already nearly run its course for another year.

Patrick Dunn is an Ann Arbor-based freelance writer whose work appears regularly in Pulp, the Detroit News, the Ann Arbor Observer, and other local publications. He would like to join a line dance with strangers, but remains too much of a scaredy cat for the time being.

Bethanni Grecynski is the frontwoman of Rhyta (trombone player and singer).

Thanks for the correction,

Thanks for the correction, we've fixed this!

The awesome to visit your…

The awesome to visit your website and i am really exited to mentioned this link for you and all windows operators because this is an very helpful for making easier our system document searching option.