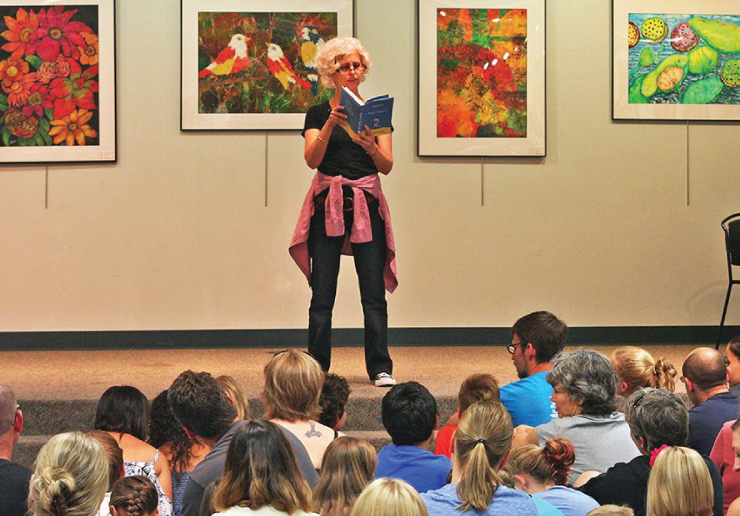 Kate DiCamillo brought some tales of despereaux-tion to the Downtown Library on Sunday.

Bestselling, award-winning children’s author Kate DiCamillo (Because of Winn-Dixie, Flora & Ulysses, The Tale of Despereaux) drew a few hundred excited fans – clutching books as if they were treasures – to the Ann Arbor District Library's Downtown Library on Sunday afternoon; and she not only read from her new novel Raymie Nightingale, but self-deprecatingly shared the reason for her “late start” as a writer.

“When I was in college, I had a professor who said to me, in my senior year, … ‘You have a certain facility with words. You should consider graduate school,’” said DiCamillo, dressed in sneakers, black jeans, and a black V-neck T-shirt, with a pink long sleeved shirt wrapped around her waist. “That’s exactly what he said, but I was 20 years old, and so, I heard something entirely different. I thought he was speaking to me in code, and that he was saying, ‘Wow. You are super-talented. I think that you’re probably the next Flannery O’Connor.’ So I thought, ‘Why should I bother with graduate school if I’m really talented? I’m just going to go be a writer.’ So what I did was, I used my mother’s JC Penney credit card and I got a black turtleneck, and then I was set to go. I just sat around, wearing the black turtleneck, looking bored and disdainful and having people go, ‘Oh, that’s Kate. She writes.’ I did that for 10 years. … You can dream all you want and have great story ideas in your head, but eventually, you’re going to have to sit down and figure out a way to do the work. And I didn’t figure that out until I was 30.”

DiCamillo’s now established her regimen, obviously, having published about 20 books over the course of 20 years. The author spoke about how a novel now generally takes a year and a half – working through 7-8 complete drafts – for her to write, and she advised aspiring writers to read as much as they can. But the suggestions didn’t end there.

“Another thing you have to do is find out a way to make a deal with yourself about how you’re going to do the work of writing. For me, it’s two pages a day. I’m not offering that as a directive, but saying that’s what I have found works for me. So I make myself write two pages a day, whether I feel like it or not. And guess what? I never feel like it. So what I do is, I do it first thing in the morning. I come downstairs, I pour the coffee, I go right in there and write the two pages before I can talk myself out of it. And I don’t know about you guys, but I’ve got a voice in my head that goes, ‘You don’t know what you’re doing. You can’t write a book. This is never going to work.’ I have found that that voice sleeps in ’til about 9 o’clock. So I get up at 5:30, 6 o’clock, … and when that voice shows up to say, ‘You fraud, you don’t know what you’re doing,’ I’ve already done the important work.”

With an easy, approachable charm, DiCamillo – her hair a gently messy, white-blond cloud – answered kids’ and adults’ questions for nearly an hour on Sunday, addressing her characters’ often-odd names (“The only explanation I have is, I am a strange person, and I grew up in the South”); how she doesn’t write from an outline (“It’s a terrifying way to write, but I find that if I know what’s going to happen, I have no interest in writing the story”); how she struggled to write following the huge success of her first novel, Because of Winn-Dixie (“I knew I was going to have to go in a completely different direction, and so, enter the mouse with extremely large ears [Despereaux”); why authors and illustrators usually have no communication with each other until after a book’s publication (“It was long my suspicion that authors are crazy, and artists are even crazier, so why should we have them talking to each other? I ran that by the publisher, and they said, ‘Yeah, that’s it’”); and how the experience of her father’s abandonment when she was 6 shaped her and made Raymie Nightingale – in which a girl enters a pageant in hopes that a win would convince her father to come home – one of her most personal books (“(Raymie’s) the kind of kid that I was: worried and hopeful and watching all the time and flexing my toes. … That’s as close as I’ve ever come to putting myself in a book”).

One of the scores of kids seated on the floor asked what drove DiCamillo to write stories.

“Part of it is being a reader and living for books,” DiCamillo said. “And you get told those stories, and you feel like you want to tell a story back. And part of it is, as hard as writing is for me, when I’m writing a story, I’m connecting to the world and to myself, and it helps me understand things. It makes the world make more sense if I’m writing.”

Indeed, one of the most sad and funny moments of DiCamillo’s talk arose when a fan asked where Flora & Ulysses’ surreal plot – focusing on a squirrel that’s sucked up into a vacuum cleaner and gains super powers and writes poetry – came from.

“My mother passed away in 2009,” DiCamillo said. “She had a tank Electrolux vacuum cleaner that she loved. And in the last year of her life, she said to me many times, ‘What’s going to happen to the vacuum cleaner after I’m gone?’ I kept on saying, ‘I’ll take the vacuum cleaner. Don’t worry about the vacuum cleaner.’ … She passed away, and I did what I promised. I took the vacuum cleaner, but I had to put it in my garage, though, because I’m allergic to cats, and my mother had the world’s most evil cat named Mildew. … So I put the vacuum cleaner in the garage, and every time I pulled into the garage, it would make me feel really sad, and make me miss my mother. So that’s one place where the story started. And the second thing that happened is, the spring after my mother died, a squirrel was on my front steps, draped in this very dramatic fashion and clearly unwell.”

DiCamillo called a close friend who said she’d come over and “whack him over the head.”

“I’m on the cell phone, right next to the squirrel, as she’s saying this, so I start to back away, because I don’t want him to hear it,” DiCamillo continued. “So I go in the side door, and I look out the front door, and guess what? He did hear it. He was gone. He clearly thought, ‘There’s better ways to die. I’m going elsewhere.’ So it made me feel sad, and it made me remember a wonderful essay that E. B. White wrote called ‘The Death of a Pig.’ … Before Charlotte’s Web came out, he was thinking about how to save a pig’s life, so I started thinking about how to save a squirrel’s life … And I combined the squirrel with the vacuum cleaner in the garage, and that’s where the story came from.”

Finally, an adult in the crowd asked about DiCamillo’s recent reference (in an interview) to a White quote that goes: “All that I hope to say in books, all that I ever hope to say, is that I love the world.” The fan asked DiCamillo to talk about the quote further in light of recent, tragic events.

“I think that we need stories more than we ever have needed stories, and we need to collect around stories and read stories out loud together,” said DiCamillo. “Stories teach empathy. You learn to think about what the other person is feeling, and it is so necessary to imagine yourself into somebody else’s shoes. And I think we need that so much right now.”