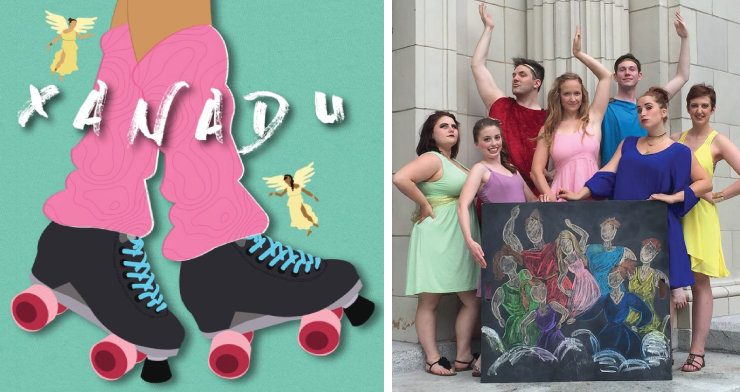 You have to believe we are magic in Penny Seats's Xanadu.

Sometimes, you actively avoid re-visiting the most beloved TV shows and movies of your youth, because you know in your gut that the adult, more critical version of yourself will see nothing but flaws.

Yet when a witty playwright like Douglas Carter Beane (“The Little Dog Laughed,” “Lysistrata Jones,” “As Bees in Honey Drown”) adapts one of your favorite childhood movies – Xanadu, now being staged by Penny Seats Theatre – you get the best of both worlds. Yes, Beane affectionately mocks the campy film musical’s laughable absurdity, but he also unabashedly grants us permission to re-visit it, as well as its still-appealing ‘80s score (by Jeff Lynne and John Farrar).

For those of you who, for some reason, didn’t hold a cassette recorder up to the TV as Xanadu played on your family’s jerry-rigged cable system - ahem - here’s the story: frustrated Venice Beach artist Sonny Malone (Matt Pecek) is about to give up when Kira (Paige Martin) rolls into his life on a pair of skates. She’s a muse, one of 9 Greek sister goddesses who inspire artists, so she guides Sonny toward his dream: a roller disco that’s also an arts showplace. Naturally.

But when Sonny becomes business partners with a rich, older man (Roy Sexton) from Kira’s past, and Kira’s jealous sisters (Allison Simmons and Kasey Donnelly) decide to intervene to bring the upstart down, Sonny’s roller disco dream hangs in the balance.

Penny Seats’s outdoor production (in West Park) struggled mightily with sound issues on opening night. The actors’ mics were hit-and-miss, which meant that some lines (and jokes) got lost; ensemble numbers, particularly near the beginning, never quite gelled, vocally; and the show’s band – situated on the West Park band shell stage, a good distance behind where the action unfolds (which may have been one source of the problem) – often sounded pretty rough and out of sync, shifting tempos and struggling to align with the performers.

This is one reason why it’s particularly tough to stage a musical outdoors, of course. It’s harder for the performers and the musicians to hear and listen to each other, and focusing and balancing the sound is a challenge.

But that wasn’t the only difficulty facing Penny Seats in regard to this show. As the program notes, Xanadu's original director had to leave the production two weeks into rehearsal, so a number of local theater artists (R. MacKenzie Lewis, and Thalia Schramm and Matthew Brennan from Dexter’s Encore Theatre) pitched in to help direct the show, and an ensemble performer (Sebastian Gerstner) stepped in as choreographer.

Gerstner’s choreography is appropriately sassy and fun, and Ginny Reiche’s flowy costumes for the muses pop with color. Given the constraints of the open, outdoor performance space, some exits and entrances feel awkward; but using nothing more than a few free-standing columns, a phone booth facade, and a similarly-sized set piece with Sonny’s chalk drawing of the muses, cast members perform costume changes – and get into and out of roller skates – with impressive alacrity.

Martin looked a little shaky on her skates at times, but she generally has a ball playing golden-haired, favored-child Kira (known as Clio to her sisters and father Zeus), who glides dramatically across the stage each time she pronounces her own name, and adopts an Australian accent by way of a disguise – but mostly because Olivia Newton-John, the original movie’s star, had one. Martin’s well-cast with Pecek, who charmingly conveys Sonny’s dimwitted-but-sweet worldview while also providing solid vocals. Finally, Simmons’s quirky delivery gives her accomplice role added comic oomph, and Gerstner gets bonus points for flinging Martin over his shoulder on cue while donning a Pegasus head. (You heard me.)

Some of Xanadu's sound issues will likely get worked out as the run continues, but opening night felt like a show that wasn’t quite ready for public consumption yet – perhaps because of all the behind-the-scenes challenges previously mentioned.

But even while the production team progresses and makes fixes through the show’s run, there’s no denying the charming silliness of the material itself. The pop score still feels infectious, and the silly, warm-hearted goofiness of Beane’s book provides a temporary respite from the bad news pouring in from every part of the world just now. No, Xanadu won’t cure what ails us these days; but being able to giggle at a 1980s roller disco dream for 80 minutes is nonetheless a kind of comfort.


Xanadu has shows at 7 pm Thursday through Saturday now until July 30 at the West Park Bandshell. Tickets are available online.