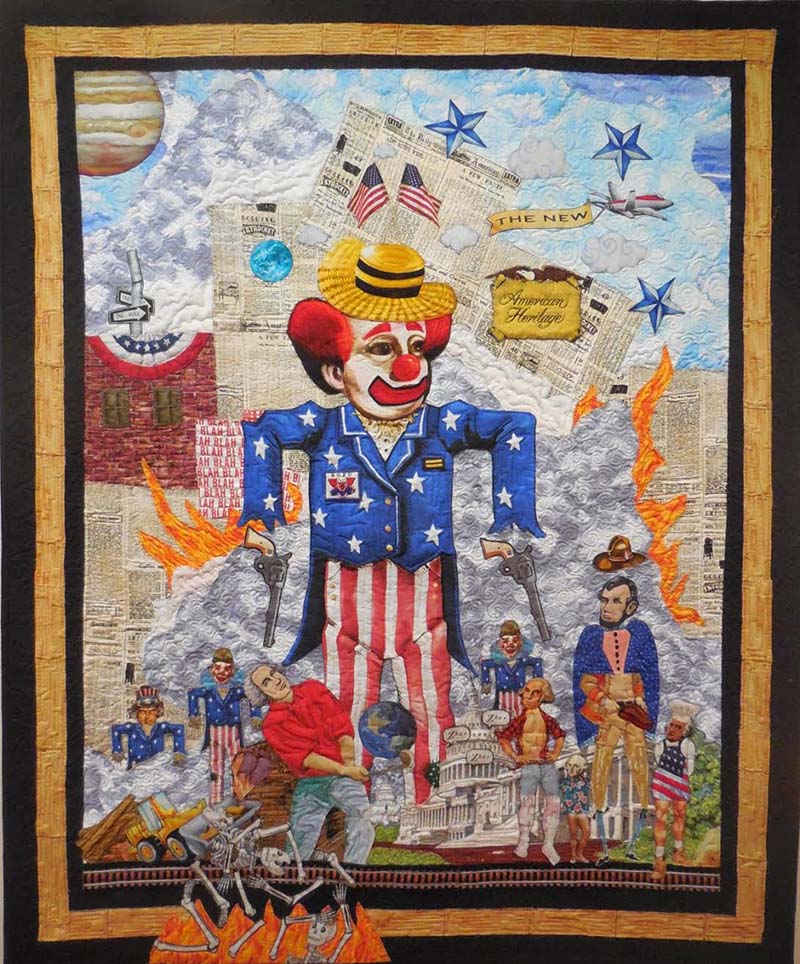 Indeed, more precisely: What physical, cultural, theological, and/or social features does a real American have? Do these perimeters have any boundaries that pertain to being a “real” American? And what are the political consequences—if there are any such consequences—attached to this definition?

After all, the presumption is (and it’s certainly been repeated enough during this present election cycle) that there is such a thing as a “real” American. And it’s a seemingly strong potion upon which to mount a political campaign.

But is there such a thing as a real American? This display of superlative art intends to find out—for better or worse.

As juror and Ann Arbor-based photojournalist Peter Baker tells us of his rationale for the exhibit, “Real American” seeks to “explore the generational, ethnographic, cultural, and anthropological ideals of what the word ‘American’ means. From fresh apple pie to Budweiser, the Star Spangled Banner to Party in the USA, what is the modern American experience?

“Are we entering the sci-fi World of Tomorrow, longing for the Norman Rockwell past, or painting ourselves into an Idiocracy? If our culture is our biggest export, what kind of image are we presenting to the world?

“This exhibition,” concludes Baker “seeks artworks that span the spectrum from whimsical to austere, nostalgic to provocative. Artworks may consist of images from popular and visual culture, contain everyday objects assembled in unexpected ways, or incorporate stars and stripes.”

Correctly said—and perhaps the best thing about Baker’s selections in this show is the extraordinary range of what a real American can be. After all, even if the common understanding is also obviously a caricature, Americans cannot by definition or description be said to be analogous to what a Frenchman or Irishman or Nigerian supposedly looks like—or supposedly is. The beauty of the term is that a real American can look like all stereotypes.

As stated above—and is the case with most group exhibits—there’s no particular rhyme nor reason to the artwork in “Real American” outside of taking general aim at the topic. And interestingly enough, this speaks of both the pluralism of our society as it does these artists’ decidedly independent frame of mind. The exhibit proves it’s a good American place to be.

For example, Shawn Quinlan’s Best of Show quilt and fiber “The New American Heritage” is an emphatic satirical take on what is real about being a “Real American” as the quilt takes scatological aim at the U.S.A. through its lampooning of our society’s strengths and weaknesses. Uncle Sam is depicted as a red, white, and blue clown with straw hat atop and arms propped with disembodied six-shooters at waist-height standing in front of a cloud of newspaper smoke and fire. Add an exceptionally buff George Washington as well as a vaguely surreal exquisite corpse Abraham Lincoln charbroiling a steak and Quinlan’s “The New American Heritage” is a rather pungent view of what it means to be a “Real American.”

“The New American Heritage” is one of many artworks in this exhibit that have an overt political or social bent—this is the kind of display that brings out the best of this kind of parody. Yet license of free thought is only one aspect of what it means to be an American. On the other hand, Baker’s Second Place archival inkjet “Monster Energy, Tulsa” by Dan Farnum touches far more subtly and thoughtfully at class and economics in its artless depiction of an everyday group of archetypical American youths standing casually in front of suburban strip mall.

But so much for politics: The exhibit is also exceedingly lyrical, and my favorite work on display is Allen Park, MI Seder Burns’ magnificent archival inkjet “RV Camped for the Night on BLM Land in Colorado” color photograph that describes an “unexpected, quirky, and complex” view of what it means to be a real American.

This lone camper vehicle, taking advantage of federal regulation that allows for extended free camping (albeit in a band of states running vertically from Montana to New Mexico; horizontally west to the Pacific Ocean) is shown after dusk set against a magnificent American countryside with stars and stripes strategically draped across the front windshield.

Burns’ photograph clearly partakes of what it means to be a “real” American as there’s a free-spiritedness that’s been part of our national wanderlust reaching back for centuries from the days of Native American habitation up and down North America to varied European-based explorations through the Manifest Destiny that’s subsequently championed continental expansion. His “RV Camped for the Night” merely gives this notion a well-deserved 21st century spin.

Shawn Quinlan, Dan Farnum, and Seder Burns ultimately span the range of what Baker heartily illustrates in this exhibit. Yet there are, of course, many more views. What’s implicitly inferred in each work in this display is the belief that what it means to be a “real” American is really no more than a psychological state of mind—and everything else proceeds from there.