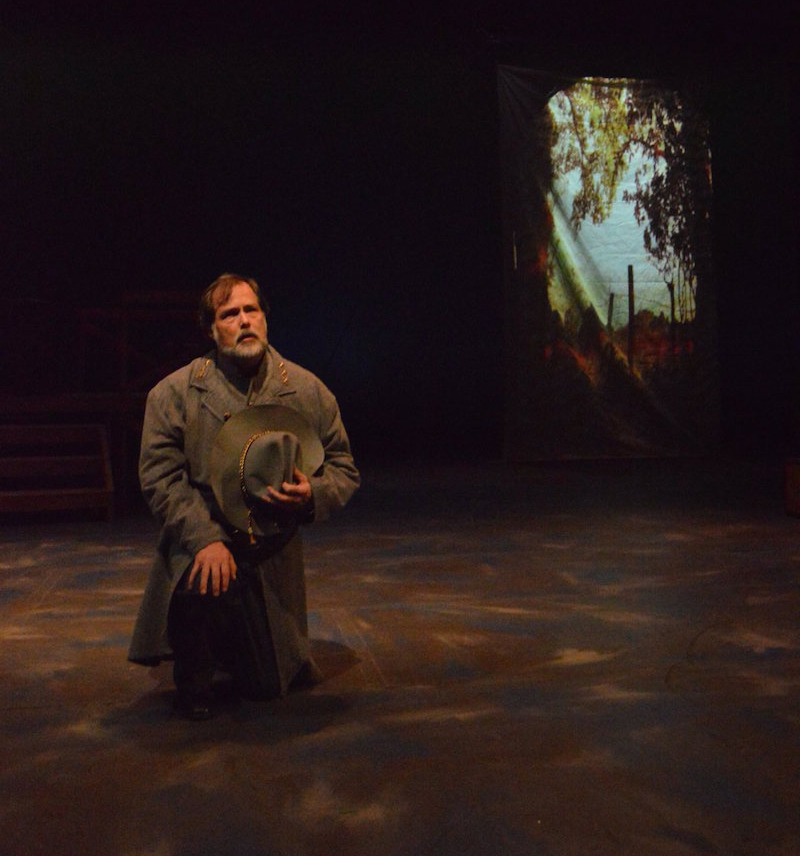 Tobin Hissong in The Killer Angels.

One thing you’ll inevitably think about while watching the Michigan stage premiere production of Karen Tarjan’s The Killer Angels – presented by Michigan Shakespeare Festival, and inspired by the 1975 Pulitzer Prize-winning Civil War novel of the same name by Michael Shaara – is how 19th century American warfare and military strategy look nothing like our contemporary conflicts; yet even so, brutality, death, and nightmarish confusion on the battlefield remain constants.

Focused on the three-day Battle of Gettysburg – cited by many as a key turning point for the victorious (uh, spoiler alert?) Union Army – Killer Angels introduces us to military leaders as well as infantrymen on both sides of the war.

How? By double- and triple-casting the production’s 12 actors. And while this casting instruction/suggestion is wholly practical, it nonetheless makes following the play’s already-complicated narrative that much harder. Indeed, if your knowledge of the Battle of Gettysburg is minimal - ahem - you’ll likely be struggling to keep the characters (and other details) straight.

But there’s also a larger storytelling paradox at work: a military battle must, by definition, involve lots of people; and yet, to establish an emotional connection to the story, the audience must have sustained, intimate access to a smaller group of characters. (This is how we follow Shakespeare’s history plays, which tend to focus less on a single battle and more on those vying for power.) Because so many leaders and soldiers played a key role – some for better, some for worse – in the Battle of Gettysburg, Killer Angels shifts focus often, providing only cursory glimpses of most characters.

Yes, some conversations among the men are highly personal and touching; but the moments are fleeting, making the show feel more like a well-crafted, visually sumptuous 3D history lesson – with occasional musical interludes.

Indeed, the cast’s spare, haunting, men's chorus harmonies on songs like the show’s opener, “The Battle Hymn of the Republic” – marvelously led by Killer Angels’ Troubadour Ian Geers – were among my favorite moments of the show. Music director Kate Hopgood, who researched and arranged the show’s music, in addition to being the show's sound designer, affectingly gives the show some soulful scaffolding (and thus gives patrons a few goosebumps).

Jeromy Hopgood’s scenic design is simple and theatrical, so that despite the play’s many locales, the only constants are a wood platform at stage right that stands in for General Lee’s (Tobin Hissong) headquarters, and a draped sheet of white fabric for projections (designed by Christine Franzen) that hangs upstage left. To establish other settings, crates get moved and stacked, so soldiers may appear to be sitting in a tree, or taking cover behind the terrain’s natural features.

Costume designer Patty Branam expertly dresses the actors in historically accurate uniforms, using a pants-and-white-shirt base that allows for several quick costume changes; and the attention paid to details like the worn, weathered look of Lee’s hat, and the way the number of buttons on a uniform indicates one's military rank, really seals the deal. Betty Thomas designed the show’s era-appropriate props, and David Allen Stoughton’s lighting design looks gauzy and occasionally spooky under cover of fog, giving Killer Angels the feel of a lived ghost story.

David Blixt does fantastic work choreographing the show’s battles, but the most arresting moment comes at the show’s climax, when an elegant and devastating bit of stagecraft conveys how Lee’s advancing Confederate troops are gutted in the final showdown.

Scenes like this, as well as the more personal, philosophical conversations that happen between men at Gettysburg, get to the heart of The Killer Angels, and director Janice L. Blixt seizes on the show’s best moments with a sure hand. And although the ensemble was strong generally, some standouts included Geers, who guides the audience through the complex story while slipping into multiple roles; Dwight Tolar as Union Col. Chamberlain, a thoughtful, dignified former schoolteacher-turned-soldier who has to make terrifying choices on the battlefield (like charging when his men run out of ammunition); Robert McLean as frustrated Confederate Lt. General Longstreet, who carries out Lee’s orders even when he knows the mission is doomed; and Hissong, who makes Lee a well-intentioned leader who’s so set on ending the war that his judgment about how to best achieve that is compromised.

Civil War buffs will likely swoon at The Killer Angels, as will fans of Shaara’s book (or the film adaptation, Gettysburg); and MSF’s overall execution is impressive and solid. But history dilettantes looking to get lost in a gripping story may instead just feel generally lost.