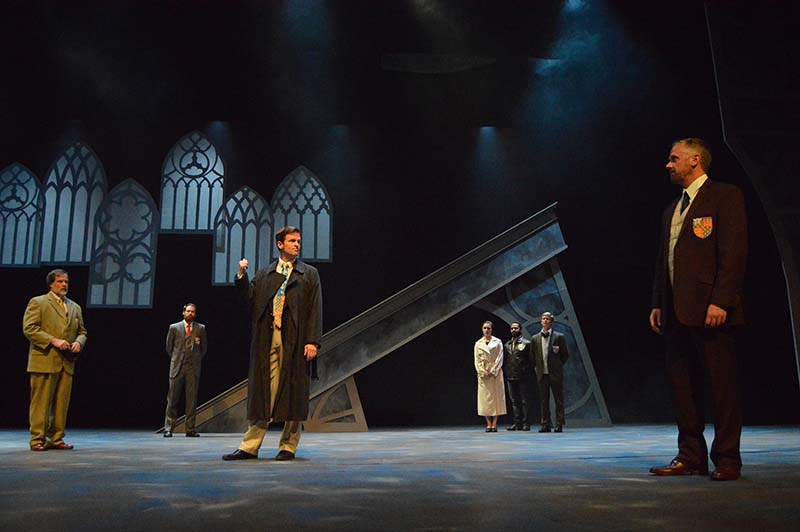 Sometimes, when you see a Shakespeare play that’s rarely produced, you walk out thinking, “I’m pretty sure I know why.” But then, at other times, like an unexpected gift, you walk out of a production thinking, “Where have you been all my life?”

The history play focuses on King Richard (Robert Kauzlaric), who’d been crowned at age 9, after his grandfather Edward III ruled England for 50 years, and his father, the natural heir, died.

Richard II takes place when Richard has reached adulthood, after wrangling with his father’s brothers for years to retain power. When one of Richard’s cousins, Henry Bolingbroke (Robert McLean), gets into a feud with a noble named Thomas Mowbray (Matt Daniels), who’s accused of being involved in the murder of one of Richard’s uncles, Richard banishes them both, thereby angering Bolingbroke’s father, John of Gaunt (Alan Ball). The rift sets events in motion, as Gaunt confronts Richard and later dies; Richard leaves England to reclaim power in Ireland; and Bolingbroke returns to England to not just claim his father’s title and land, but also Richard’s crown.

Many factors play into our response to a show, of course: design elements, the language, performers, pacing, the director’s choices, prominent themes, and even what personal experiences we’re bringing with us into the theater.

For me, this seldom-produced history play opened up near its end, when Richard has been usurped and imprisoned and says: “Alack the heavy day/ That I have worn so many winters out/ And know not now what name to call myself./ … But whate’er I be/ Nor I nor any man that but man is/ With nothing shall be pleased till he be eased/ with being nothing.” In this monologue, Shakespeare reflects not only on the experience of a person’s previously firm sense of identity in freefall, but also our shifting sense of our place in the world as we age – which is to say, the inevitable realization that each of us might not, after all, be super-special snowflakes.

So there’s already some grade A meat to chew on in Richard II, but director Janice L. Blixt’s vision for the show also injects some fun touches. Re-imagined as a contemporary power struggle, MSF’s Richard II features actors in suits and ties and sweater vests (designed by costumer Suzanne Young) instead of the more traditional doublet/hose combo. With this in mind, Richard’s sycophantic, hipster friends, when not laughing at others or rolling their eyes, play a subtle drinking game early in the show, stealing nips from their pocketed flasks each time someone says the king’s name. This led me to viewing the trio of Bushy, Bagot, and Green (Eric Eilersen, Ian Geers, Michael Phillip Thomas) as “the bro courtiers.”

But the center would not hold if not for the truly outstanding work of Kauzlaric, who makes Richard someone we feel probably should be knocked down a peg or two, but perhaps not knocked off the peg board altogether. For Richard is smug and self-assured as king, not to mention compassion-challenged (upon learning of his uncle’s death, he flippantly says, “So much for that”); but these flaws somehow make Richard’s imminent fall all the more searing. When Kauzlaric grips tightly onto the crown, just as Richard’s scheduled to hand it over to Bolingbroke, he delivers a blistering speech, disillusioned by how quickly and easily his life has been dismantled; and in the show’s powerful penultimate scene, when he’s been abandoned by all and left alone in his cell, Kauzlaric presents us with a man earnestly struggling to process grief.

Jeromy Hopgood designed the show’s set, which consists of a seemingly collapsed, slanted gateway (actors often duck while making entrances through it), and a backdrop of church windows hanging at different levels. Visually, the stage picture suggests a wobbly, failing infrastructure, which dovetails well with a play about a young ruler who enjoys the confidence of neither his family nor his subjects. Things really are falling apart.

Of course, Shakespeare’s lesser known history plays often frustrate contemporary audiences; it can feel as though you’re jumping into the middle of an epic novel, and try as you might, there are just too many people, and too much you’ve missed, to make sense of the whole.

But you can trust that you’re in good hands with director Janice Blixt, who has, to name one example, added a brief prologue to Richard II – from an entirely different play – to dramatize the murder that’s at the heart of Bolingbroke and Mowbry’s argument in the true opening scene. (This also, conveniently, sets us up for the shady betrayals and violence to come.) Blixt’s commitment to finding creative ways to fill the gaps in our knowledge on stage, so that we’re better able to plug in and focus on the story being told, demonstrates MSF’s mission writ large: to encourage modern audiences to re-connect with Shakespeare’s work in new, invigorating ways.

Held to this standard, Richard II passes with flying colors.