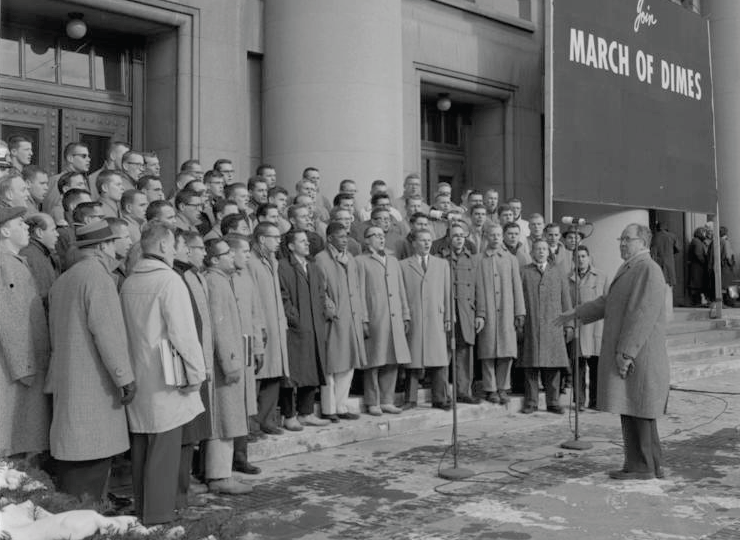 U of M's Men's Glee Club demonstrates the value of community singing outside of Hill Auditorium, January 1959. Image from Old News.

There are songs that move your soul, songs that make you want to dance, songs that fill your heart. But what about singing? Can singing—especially in a group—really make a difference in your life?

The answer to that question is a harmonious “yes!” Numerous studies indicate that singing changes our brains, both calming and energizing us. A 2013 article in Time Magazine described group singing as the “perfect tranquilizer, (one) that both soothes your nerves and elevates your spirits.”

Nowhere is this more evident than in one of the many community sings that have cropped up around our state, including one right here in Ann Arbor. Since last November, people of all different vocal abilities have been gathering at the Ann Arbor Senior Center in Burns Park on the first Sunday of the month at 7 pm to belt out tunes ranging from Woody Guthrie to Bill Withers.

As someone who was kicked out of my high school choir class, I was a bit reluctant to attend. The ad said that it welcomed anyone—whether you sang in a choir or in your shower. Since I most definitely do the latter (with a rousing selection of Barry Manilow songs), I decided to give it a try; I was put at ease almost immediately.

“How many of you were told to just mouth the words?” song leader Matt Watroba asked at the beginning of class. Since I technically was told that it was better to just mouth the words as my choir teacher was signing the slip to move me to a drama class, I raised my hand. Watroba then said the words that I didn’t know I needed to hear, “That’s nonsense. Anyone can sing.”

And Watroba knows a thing or two about singing. A singer, teacher, founding member of the National Folk Alliance, writer, former host of WDET’s Folks Like Us, frequent performer at The Ark—Watroba has contributed to the musical landscape of our country in ways that most of us can only dream of. Recently, he has focused his energies on community sings.

Inspired by the words of Pete Seeger, who said he always intended to put songs on people’s lips, Watroba set out to create and host these magical gatherings. The idea is simple—gather together, share songs, and sing. Even if you have been told you should transfer out of choir class immediately and go back to drama class. Singing is the “perfect excuse” to get offline and get back in touch with the healing brought about by being in a community.

Even after a few songs, I feel better. Research studies confirm this, finding that singing contributes to the quality of lives and lowers stress. It is considered an aerobic activity in that improves circulation by increasing oxygen in the blood. Singing also requires deep breathing, which is a key to most relaxation techniques. And honestly, it is hard to worry about your job when you are concentrating on the lyrics to some of the most beautiful songs ever written.
But why does singing, especially with others, affect us this way? Some researchers believe it may come from the endorphins and oxytocin that are released when we sing. The former hormone is related to feelings of pleasure; the latter enhances feelings of trust and bonding. Another study posited that singing is our “evolutionary reward” for working together cooperatively, rather than trying to fix something on our own.

The benefits of being in a group are also innumerable—the sense of belonging and acceptance, the absence of loneliness, the act of being welcomed. The Community Sing groups are especially welcoming, in that you don’t have to audition, and you don’t even have to be able to carry a tune.

So whether you are a trained opera singer, someone who rocks out to 80s hair bands in your car, or yes, even someone who has been asked to lip-sync in a choir, join us for our next Community Sing on August 7 at 7 pm at the Ann Arbor Senior Center. You will never be asked to just mouth the words!

Patti Smith is a special education teacher who lives in Ann Arbor with her husband and cats. She is the author of two books about Ann Arbor, the most recent is a history of the People’s Food Co-op. She wishes she had even an ounce of musical talent so that she could join the Civic Band! Visit her at www.PattiFSmith.com or @TeacherPatti on Twitter.

The Community Sing takes place Sunday, August 7 at 7 pm at the Ann Arbor Senior Center at 1320 Baldwin Ave. There is a $5 participation fee.