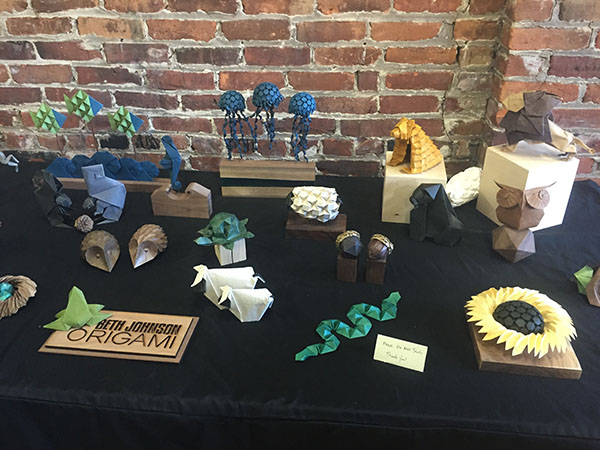 Origami pops up at the Pop-In.

The Ann Arbor Art Center held their third and final Pop-In event of the summer last Friday, in collaboration with the Intermitten conference. The conference, which focused on creativity and innovation, took place in Ann Arbor on August 5-6. Curated by Intermitten, this Pop-In event, like the two before it, featured unique art focusing on creating an immersive experience for attendees.

Immediately upon entering the Art Center, the loose, electronic, trippy music of Shigeto enveloped the senses. A large screen showed sporadic movement around an orange-tinted landscape that coordinated with the music. It took a moment to realize that individuals participating in the ICON Interactive virtual reality experience beyond Shigeto’s DJ table were controlling the movement on the screen, and the music itself to a certain extent. Wearing virtual reality goggles and holding a remote-like device that allowed users to “move,” ICON Interactive was definitely a favorite part of the show for many. One young boy became progressively more amazed as he went deeper into the VR world, and volunteers had to stand against the walls near him to protect the art as he jumped around waving the remote wildly.

After ascending the stairs to the Art Center's second floor, visitors were greeted by a large, gray phone booth-like structure with a curtain hanging down from the front side. This installation was Switch Flip, created by Anna Nuxoll and Chris Czub. Described as a “hacked phone booth,” the setting of the piece is the year 2056. As explained by Nuxoll, she and Czub imagined an astronaut who has travelled beyond the solar system, only to realize that someone has been there before. The astronaut finds a series of communications booths, and Switch Flip is meant to be one of them. Inside the booth, along with lights and eerie plants, a telephone sits on a stand with a note inviting users to “dial Earth.” Apparently, upon picking up the phone one would hear an old-fashioned dial up tone, and then could push different buttons to hear up to 30 sound samples, but the Raspberry Pi computer running the exhibit broke just 45 minutes before the show began. The concept and the booth itself were cool, but the piece was marred by the technology failure. 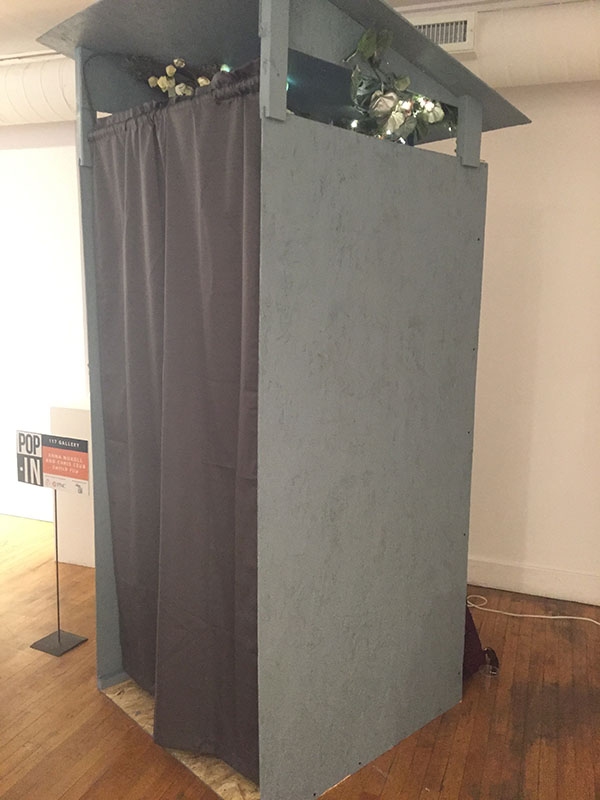 Also on the second floor was the live screen dance piece iSelf, created and performed by Sean Hoskins. The gorgeous space that the Art Center had for this performance added to it immensely; the white walls and hardwood floors offered no distractions from Hoskins, who was framed by the sunlight filtering in through the trees outside the floor-to-ceiling windows on the north side of the building. A white linen cloth cut into three strips hung from the Art Center ceiling and after the lights were dimmed Hoskins stepped forward from a corner of the room saying, “I’d like to start off by introducing myself: me, myself, iSelf,” and commenced his dance. His image was also projected into the strips of cloth using Isadora software. Later in the performance, the images on the screen doubled and viewers saw the differences in the visual field from one frame to the next, and eventually saw Hoskins’ dance on a three second and seven second delay. The entire effect was of multiple dancers that had all choreographed a complicated performance together although it was really just Hoskins, essentially dancing with himself. 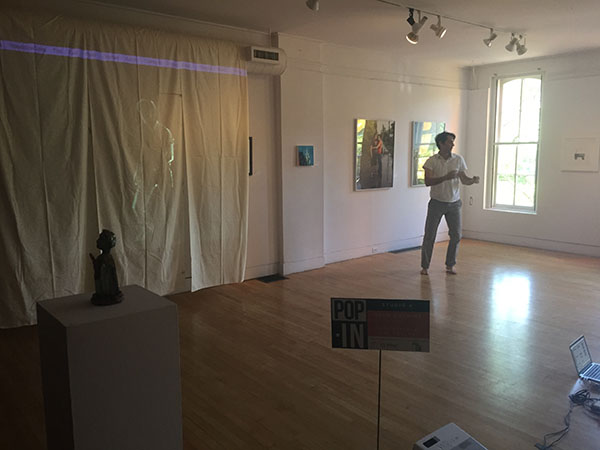 The third floor of the Art Center featured very different displays. In one studio, A2ESK8’s electronic skateboard display took up the entire room. Sadly for some, attendees weren’t allowed to actually try out the electronic boards, but there was a video, directed by Rik Cordero, playing continuously showing people riding them. There were five electronic skateboards on display, and they apparently have a top speed of 35-38 miles per hour and a range of 10 miles.

The room across the hall from A2ESK8 featured an origami exhibition by Beth Johnson, along with a demonstration and hands-on opportunity to make one’s own origami creation. Johnson’s origami is not of the usual type. She creates amazing flora and fauna out of earth-toned paper with exquisite detail. This Pulp writer was particularly intrigued by the origami sunflower and the jellyfish that Johnson managed to construct out of paper. Her designs have a distinctly geometric look, giving them all a modern feel that traditional origami lacks. The room was filled with eager amateur origami artists spread out across several tables constructing designs with the aid of books and Johnson herself.

I was delighted by the contrast of Johnson’s origami with the art exhibition by Jeremy Wheeler, which shared the same studio space. Wheeler’s posters often advertise local events past and present—some more obscure than others—and feature big words, bright colors, and eye-catching images. My personal favorite piece was the Boss Hog 2016 tour poster, depicting various people running away from a giant crustacean-like beetle. “17 years in the making! Now they emerge!” cries the poster. “Nothing can prepare you for… BOSS HOG.”

Overall, there cannot be any doubt that the Art Center’s Pop-In series this summer was a success. The diversity of the artists featured, the welcoming and accessible atmosphere that greeted attendees, and the Art Center’s ability to offer it all for free made this event and the two prior a truly special addition to summer in Ann Arbor.

Elizabeth Pearce is a library technician at the Ann Arbor District Library. She has no desire to travel 38 miles per hour on a skateboard but commends those who do.