Intermitten 2016 - The Confluence of Art and Technology was August 5 & 6 at the Ark and a few other Ann Arbor venues.

Creativity and passion hit the Ark stage last Friday and Saturday and impressed the value of hard work and following your dreams upon the completely engaged and enthusiastic attendees of the first ever (and soon to be annual – please!) Intermitten Technology and Arts Conference. The primary goal, as stated in their press release, was “to explore ways in which creativity has an ever-expanding role in our increasingly-connected world.” And they totally hit it out of the ballpark with a diverse and impressive mix of artists, musicians, filmmakers, startup founders, and techies of all sorts who came together to inspire us all to change the world with creativity, perseverance, and a little bit of business knowledge shared from those who went down that path before us.

So, what is Intermitten and where did it come from? Founded by a handful of Ann Arbor startup employees in the fall of 2015, it’s two days packed full of talks and social/networking mixers (at Rush, the Pretzel Bell, and the Hands-On Museum). There are also a few specially curated events and carefully selected stops to take in even more of what makes Ann Arbor such a great place to be – a guided bike tour by Nancy Shore of AAATA, a lithography workshop at AADL with local printmaker Jess Richard, a Pop-In at the Ann Arbor Art Center , and drinks at the Ann Arbor Distilling Company, to name a few. 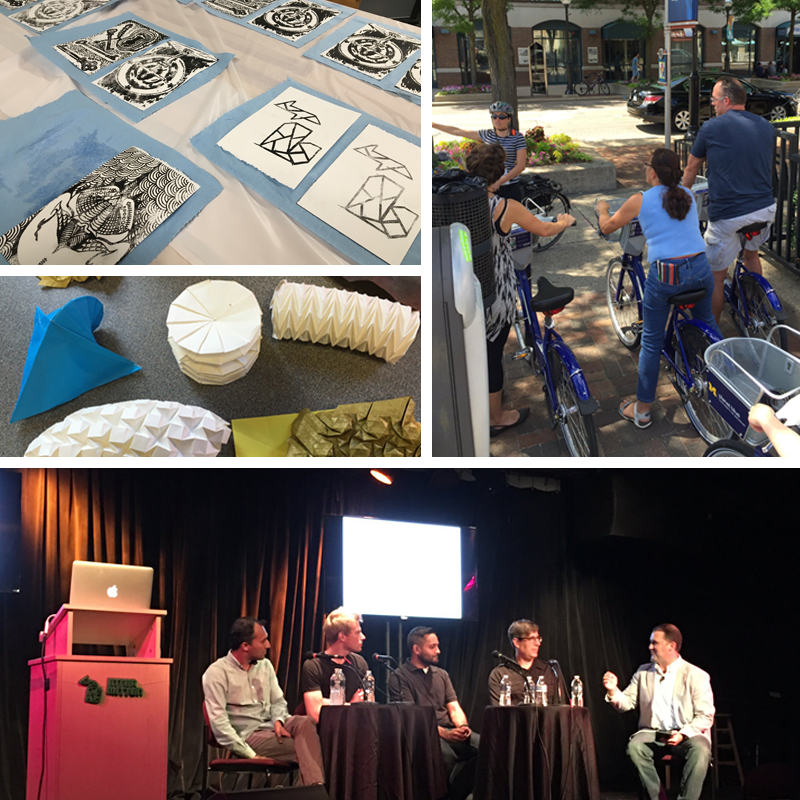 And WOW. Just, WOW. I was blown away and left with my mind reeling with ideas and plans for where to take the creative energy that was absorbed by being in the presence of so many generous and wonderful folks. What I liked best about this conference was the small-town Midwestern friendliness buttered upon the toast of a technology and arts conference. I can’t wait to see what collaborations come from the connections made at Intermitten and – even more so – what they’ll come up with for next year. I don’t know how they’ll top this one!

It’s impossible to pack all of the excitement and enthusiasm of Intermitten into a few words, but here are a few highlights from two AADL staffers who attended:

Sean Hoskins is a choreographer and performer and is the dance technology coordinator and production assistant at the University of Michigan. His passionate talk focused on having the willingness to incorporate technology into your art form. He states that creativity happens through work and that it’s important to “notice what you notice and trust that what you notice matters.”

Kendall Burke is a customer happiness specialist at Acuity Scheduling and offered an energetic and hilarious talk comparing finding the perfect job to finding the perfect mate, and yes, she referenced Tinder and Beyoncé. Burke talked about first loves in the job world, as well as toxic relationships with jobs, and eventually… one true love – that job you were truly made for. She encouraged that one should feel comfortable, confident, and empowered when walking into one’s job, and if that isn’t happening something needs to change. Her talk also included a slide with a video of baby goats in pajamas, which delighted the audience.

Sarah Hatter is the founder and CEO of CoSupport, which offers customer support coaching, among other things. In her words, “we teach companies how to kick ass and survive.” Her inspiring talk went through her version of ten steps to running your own business. She quoted Walt Disney when saying “I think it’s important to have a good hard failure when you’re young.” In short, she encourages emerging entrepreneurs to get out there and try and fail and try again. Learn in freefall.

Jon Sulkow of ICON Interactive, a digital marketing agency, spoke about some of the projects he’s worked on. One of the Intermitten Conference evening events included the POP-IN at the Ann Arbor Art Center, where Sulkow and electronic musician Shigeto created a live audio-visual experience involving virtual reality. In his talk he discussed how the project came to be and how they created the visual images viewed through the HTC Vive headset.

Jesse Vollmar and Qasar Younis spoke together in the afternoon. Vollmar is the CEO and co-founder of FarmLogs, which helps growers use technology to create a better future for their farms. Younis is the COO of the Silicon Valley incubator Y Combinator. Keeping in line with similar themes from the conference, they spoke about using your passion to start a company, but also discussed how passion isn’t enough, and that it’s necessary but not sufficient. Know what drives you and stick with it, but also be honest about it.

Joe Malcoun and Guy Suter: Who wants a little bit of the Google Campus lifestyle in their work? Joe Malcoun, CEO of Nutshell, and Guy Suter, developer behind the email management app Notion, presented In Cahoots: Getting Creative With Tech Space, a talk on the upcoming workspace Cahoots, scheduled to open in 2017. They’re planning to create a space where passionate and focused creatives can work along side motivated members of the tech community in a sustainable environment. It will be more than a tech campus co-op, though—Cahoots also promises an event space to serve as a destination for anyone in Ann Arbor with an interest in art and technology.

Beth Johnson: If you ask a person to tell you a story, most of the time they’ll stammer as they try to think something up. But if you ask them to tell you a story about their worst birthday party, they’ll leap right in and start. It seems counterintuitive, but limitations breed creativity, which was one of the themes of origami artist Beth Johnson's talk. In Creativity Through Constraints, Johnson revealed how working with an arbitrary set of parameters and presenting one’s self with a problem actually unlocks creativity. Your engagement within those parameters and the solving of the problem can reveal the art. Johnson also demonstrated how folding can be applied to engineering problems as well. From folding proteins to foldable structures to solar arrays, the art of folding can be used to solve a variety of technical challenges!

Shigeto: Part of the life cycle in making things is getting a reaction from a user or audience. So it’s natural that you might begin to anticipate their response before you’re finished with the making part. Zach Saginaw's (Ghostly International’s Shigeto) talk, The Pursuit of Passion, was a refreshing splash of water in the face, reminding us that one should make the work first to make ourselves happy. The monetary and service aspects of the artifact can be worked out later! He also delivered another useful reminder, especially to those of us just starting on our creative journeys: one should work with what one has, rather than waiting until one has acquired the right tools. The pursuit of passion must begin with the pursuit!

Leslie Raymond and Jason Jay Stevens: When we think of “Artist with a Capital ‘A’,” many of us imagine dour, serious, or inscrutable characters who defy us to understand or appreciate them. But sometimes artists can be mischievous experimenters who treat their work like structured play. Leslie Raymond and Jason Jay Stevens are definitely in the latter camp. Their talk. “Set the Moving Image Free,” was an exploration of the wide array of “collaborations, experimentations, curations & presentations” they create, such as animated GIF collages or mixing audio and video live in their Black Box Theater presentations at the Duderstadt. Their Peep Holes pieces present the viewer with an out-of-body experience by inviting your mind to exist in another space by virtue of the eye-sized portal. The most inspiring aspect of their talk, however, was the notion of collaboration between artists and between artists and their audience. They explored principles of UX design, which asks the artist to empathize with the recipient of the art and asks the recipient to act as a collaborator in the full expression of the piece. This was exactly what needed to be said at an event emphasizing crossover and collaboration between the arts and tech scenes! 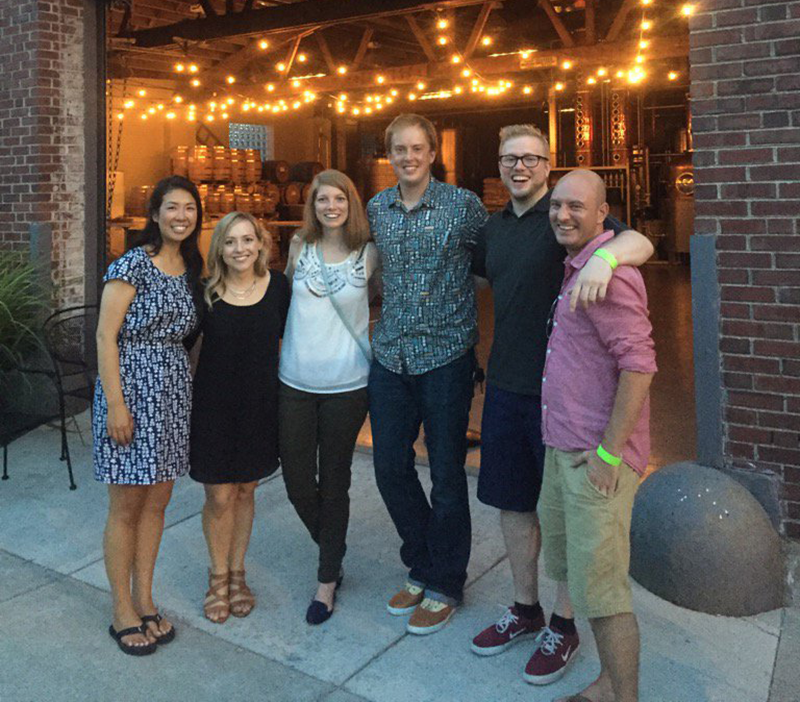 Intermitten was Friday, August 5 and Saturday, August 6, 2016. Be sure to check their website for future plans.