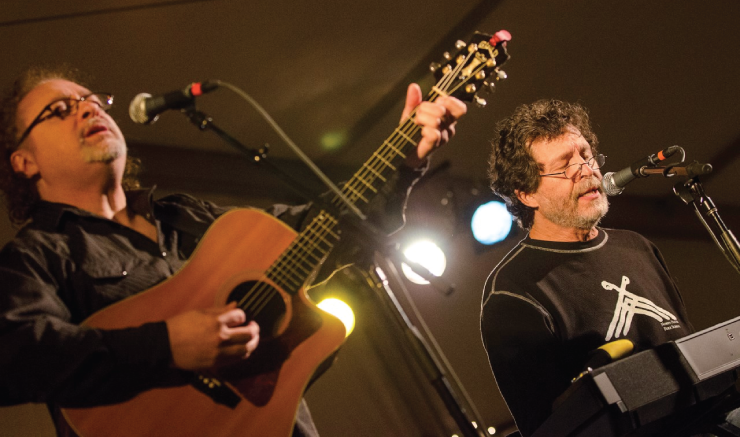 Musicians keeping it country at Nashbash.

The 10th annual Nashbash Music Festival took place in Kerrytown this past Thursday evening. Put on by the Kerrytown District Association in conjunction with the Kerrytown Concert House, the festival is a rare celebration of country music in Ann Arbor. It was a beautiful night for the event, which takes place each year in the Farmers’ Market space between Fifth and Fourth Avenues. Wolverine Brewing Company and Aut Bar slung cocktails and barbecue, and attendees could grab dinner or dessert from various food carts, including Hello Ice Cream, Petey’s Donuts and Pilar’s Tamales. Overall, the atmosphere of the festival was, as usual, relaxed and cheerful, with a wide variety of attendees. Children played and danced in the cleared parking lot, millennials busted out their cowboy boots for the occasion and sat in the sun sipping beer (this Pulp writer is upset that she forget to wear her favorite bright red cowboy boots), and older folks eagerly claimed chairs right in front of the stage to sing and clap along to the music.

Nashville singer/songwriter Sally Barris headlined this year’s festival. She’s written songs that have been recorded by a number of famous country singers including Trisha Yearwood, Keith Urban and Martina McBride, and is an extremely talented musician in her own right, currently touring with her latest album “The Road In Me.” Festival attendees were delighted with her performance last night. She played plenty of lighthearted, almost comical songs, like the one she wrote dedicated to a man who wrote his own obituary that she read about in Yahoo! News and a “Halloween love song” co-written with Don Henley. “I know what you’re thinking,” Barris joked. “Another Halloween love song?” But it wasn’t all kidding around; Barris also sang a song (later recorded by Trisha Yearwood) that she described as “deeply personal,” titled “Let the Wind Chase You. “I don’t want to work for your love/I don’t want to try to be/Something that you’re looking for/You’re never gonna find in me,” Barris sang in her clear soprano. Her set concluded with a song about a girl living in Nashville who wants to fall in love with a real cowboy, not just a guy who throws on a belt with a big buckle and some boots and believes he’s the real deal. “If I said let’s ride off into the sunset/Would you know what I mean?” Barris ended the song with a smile and a wink.

Local band Hoodang also played Nashbash. Always a delight to watch, their music is a toe-tapping blend of blues, country and rock’n’roll. Lyrics focus on, as they describe it, “people tarnished by bad blood and bad luck who still find a way to make it through to the next town, day, marriage, con or battle.” Frontman David Rossiter founded the band in 2003, and has been playing locally ever since, with various backing musicians. The current iteration has been together for several years now, though, and it seems to be working extremely well. Along with Rossiter, who plays guitar and sings, Dave Keeney plays electric guitar, Ralph McKee plays bass, John Crawford plays drums and Sophia Hanifi offers her vocal talents to round out the quintet. Hoodang isn’t particularly showy on stage, but they’re a joy to watch, simply because they seem to be having so much fun and are so comfortable together. They dedicated their song “You Don’t Tell the Truth” to presidential hopeful Donald Trump, which got laughs and cheers from the crowd. Hoodang is exactly the kind of band that one hopes to see when walking into a Nashville honky-tonk, but fortunately for Ann Arbor residents, we didn’t have to make the 9 hour drive south to see such a performance last night.

Whit Hill and the Postcards were the final performance of the evening. Hill, a longtime Ann Arborite, moved to Nashville 8 years ago and is one of the founding members of Nashbash. She scopes out acts in Nashville and selects one to bring to the festival each year. After a bit of sound trouble, Hill and the band kicked off their set with “Lotta Yer Love,” off their 2006 album Farsighted. “Don’t give me lots of money/ I don’t need your money/Just need a lotta your love,” went the rocking chorus (“She doesn’t want money, just love,” a man next to me helpfully pointed out when he saw me taking notes on the performance). The band mainly focused on songs from their 2014 album, I Dug It Up, and played a rousing version of the title track, which was a crowd favorite.

Earlier in the evening, The Bill Edwards Band, The Judy Banker Band and The Whiskey Charmers performed.

Ann Arbor is not traditionally a country music loving town, and it’s a testament to the organization of Nashbash and the talent that performs that the festival has been so successful for a decade. Even those who think they can’t bear to hear a single note of a country song would do well to check out the 11th annual Nashbash in 2017.

The 10th annual Nashbash Music Festival took place Thursday, August 18 from 5:30-9:00. The festival happens every year in mid-August and is free and open to the public.

Elizabeth Pearce is a library technician at the Ann Arbor District Library. She would also like to fall in love with a real cowboy.

Sorry I missed these guys. So

Sorry I missed these guys. So much to do, so little time.
TBB