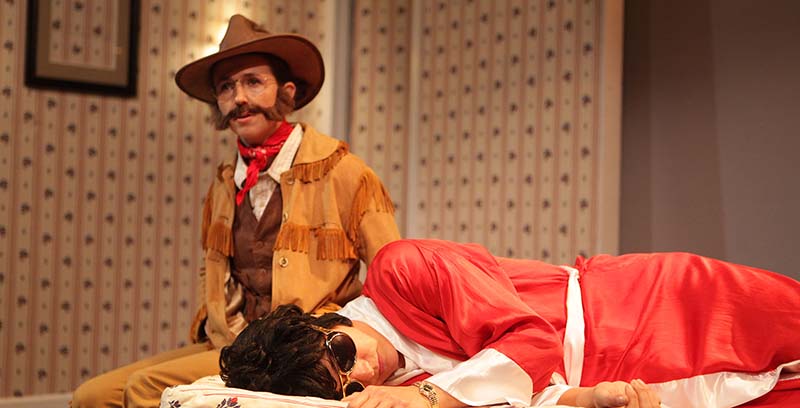 But because we’re blessed with a perennially rich, vibrant arts scene here in Ann Arbor, it can be challenging to keep track of all the good stuff on the horizon – so I’ve compiled a list of theater offerings that I’m most excited about for the coming year. The list is organized by date, so mark your calendars!

A2CT often stages big musicals, but Spelling Bee is a smaller, more intimate look at a group of driven, misfit kids (played by adults) who gather together to see where they fit into the spelling bee world’s pecking order. Sweet, heartbreaking, and hilarious, the Tony-winning Spelling Bee will likely charm your socks off. (Even though the show’s about kids, though, please be advised to leave kids younger than 12-14 at home.) Plus, one of my favorite parts of William Finn’s winning score is a love song about a dictionary – which may just say a little too much about me. Ahem.

I’m super-excited to see this show, which sounds trippy and fun and fascinating. (The UMS website calls it “a halluncinatory road trip from the Badlands to Graceland.”) In the show, the spirits of Elvis Presley and Theodore Roosevelt, played by women, battle over the soul of Ann, a shy meat-processing plant worker. This surreal mash-up of the past and the present, icons and “regular people,” history and mythology, and gender definitions promises to be a memorable night of theater, courtesy of UMS and the Brooklyn-based company, The TEAM.

U-M’s musical theater program is one of the best in the country, so this goofy, Tony-winning show promises to be a blast. In Chaperone, an anti-social musical theater buff puts the score of a beloved, over-the-top, 1928 show on his record player, and the show comes to life on stage, with hysterical asides and commentary from the narrator. Get your tickets now, folks.

Inspired by a 2006 novel by Dave Barry and Ridley Pearson, Starcatcher sketches out Peter Pan’s backstory, acting as a kind of prequel to the story we all know and love. Plus, this will be the first time local audiences will get the chance to see the magical, award-winning show, which made its Broadway debut in 2012.

EMU Theatre’s A Raisin in the Sun at EMU, playing February 8-12, Sponberg Theatre, 124 Quirk Hall on EMU’s campus in Ypsilanti.

I’ve studied the play, I’ve seen the movie, but I’ve never in my life seen a live production of Lorraine Hansberry’s classic play about a poor black family in Chicago who struggle to decide what to do with the patriarch’s life insurance payout check when it arrives. Each person wants the family to have a better life, but how to get there is the subject of an impassioned debate that reflects ideas about race, class, generational conflict, and familial love.

Anne Washburn’s 2012 play is where pop culture and edgy theater meet. In Mr. Burns, a group of post-apocalyptic survivors gather to recount an episode of “The Simpsons”; seven years later, we see these same characters as a theater troupe that specializes in re-enacting episodes of “The Simpsons”; and 75 years beyond that, we see how this story has been altered and interpreted by a culture still reeling from near-extinction.

Druid, based in Galway, Ireland, last came to Ann Arbor via UMS in 2011 to present a fantastic production of The Cripple of Inishmaan, so color me excited to see yet another Druid production of a Martin McDonagh drama. “Beauty Queen” chronicles a battle of wills between an aging, manipulative mother, Mag, and her plain and lonely 40 year old daughter, Maureen, who’s been playing the thankless role of caregiver in an economically depressed Irish village in the 1990s. Marie Mullen, who won a Tony Award playing the daughter, plays Mag in Druid’s production. A can’t miss in my book.

David MacGregor’s comic drama had its world premiere at the Purple Rose in 2008, and it became one of my all-time Rose favorites. In the play, on Halloween night, two suburban couples agree to drink an exotic Peruvian wine – made from the skins of blue dart tree frogs – that acts as a truth serum. They soon learn, though, that while the truth can set you free, it can also make your closest relationships profoundly tricky.

Complicite has become one of my favorite theater companies in the world, thanks to UMS repeatedly bringing it to Ann Arbor to present mesmerizing, technically innovative past productions like The Elephant Vanishes, A Disappearing Number (my favorite), and Shun-Kin. This time, we get to see The Encounter, inspired by a National Geographic photographer’s experience, in 1969, of getting lost among the people of Brazil’s Javari Valley. The audience will wear headphones for the show, which makes use of “3D Audio” to more fully submerge audience members into the Amazon rainforest experience.

Though this musical has toured in recent years, I’ve never had the chance to catch it, so I’m excited to see it at Encore, which has really upped its game, in terms of production quality, in the past year. Quartet dramatizes a December 4th, 1956 recording session with Elvis Presley, Johnny Cash, Carl Perkins and newcomer Jerry Lee Lewis, with all the actors playing live music on stage. Given the huge success Encore had earlier this year with Always … Patsy Cline, I have high really hopes for Quartet.

I know, I know. But I’ve got young kids who love going with me to shows, and not only will this stage production of Mermaid probably be top notch – simply because it’s Michigan’s musical theater program putting it on – but it will make them happy to sing along to Menken and Ashman’s still-infectious score (“Under the Sea,” “Part of Your World,” etc.). Yes, we will likely have a post-show discussion about whether Ariel should be willing to give away a significant part of her identity to chase after a guy (sigh), but even so, the potential for stage magic is pretty high with Mermaid, so I assure you we’ll be there.