Lord of the Wire, David Dmitri.

On Saturday evening, I sat inside a white tent in Burns Park and watched veteran performer David Dimitri’s one-man-show, “L’Homme Cirque” (presented by Ann Arbor Summer Festival), under what might be ideal circumstances – which is to say, I had a five-year-old on my lap.

Neve’s stream-of-consciousness curiosity underscored Dimitri’s playfulness and demonstrated to me how the show is ultimately built on a kind of repeating pattern: stoke anticipation, tease the audience, and finish with a moment or two of joyous wonder.

With bleachers surrounding the small performance space in the tent, Dimitri began the show by changing his shoes.

This may sound painfully banal, but as is true for all the show’s transitions, Dimitri finds a way to make even the most ordinary moments whimsical and fun. And soon enough, Dimitri uncovered a treadmill that launched him into a routine – set to recorded music that could easily accompany a Woody Allen comedy’s opening credits – that involved him gradually dialing up the machine’s speed, as well as his feats’ level of difficulty, until you wondered how on earth he was going to get on, let alone how he’d pull off a cartwheel or a walking handstand.

Dimitri then incorporated a small pommel horse – decked out with a mane, a painted face, a tail, and legs – and propped it alongside the treadmill, so as to give the crowd the experience of watching a trick rider without a ring to run around. This bit of physical comedy was pure fun, yet you never lost awareness regarding the skill necessary to achieve these stunts.

While he is certainly a man of multiple circus talents, including playing the accordion (proven when he provided a hilariously suspenseful soundtrack for himself while he performed a backflip off a seesaw), Dimitri’s calling card has always been his work on the high wire. Inside the small tent at Burns Park, the crowd got to watch as he pulled himself up without a ladder, played trumpet while lying on the wire (offering a more laid back musical backdrop this time), and jumped rope.

Then, finally, Dimitri pulled a large cannon from the sidelines, made an amusing show of dressing in a flight suit and helmet, got the cannon properly positioned, pulled himself up inside it and lit a fuse.

At this point, my notoriously skittish five-year-old covered her ears and burrowed into me, but she ultimately couldn’t look away, either – which shows exactly how much she’d connected with Dimitri. This is one moment when the intimacy of “L’Homme Cirque” really pays a dividend. Every second of the show happens in close-up, so that Dimitri’s warm, witty personality shines through, and we quickly feel like friends more than an audience. 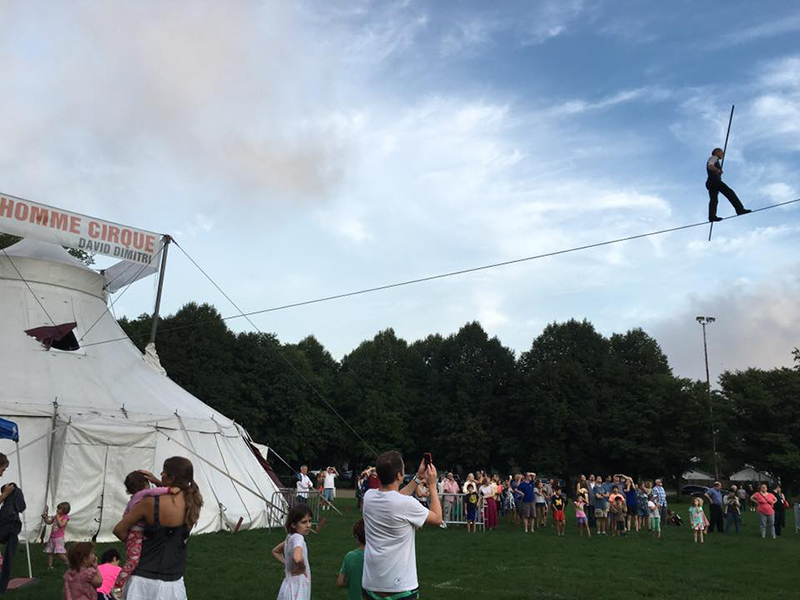 Even so, precision within each of Dimitri’s set pieces must be crucial for their successful execution, and while he clearly takes pains to get each object into the correct position, the fact that he does so so quickly and cleanly, by himself, is almost as astonishing as the feats themselves. And he never seems rushed, either. During one transition, he pretended to give a little girl in the audience a handful of feed, and as she walked over to feed the horse, at Dimitri’s urging, we all briefly believed in this flight of fancy as much as she did.

The show’s big finish, though, was far more broadly dramatic, as Dimitri pulled himself up onto another high wire, opened a flap on the tent, and waved for the audience to follow him outdoors. We tumbled out of the tent to watch him climb 150 feet into the air on a wire, toward the blue sky and clouds of the evening.

I’m pretty sure this magical sight is one that my inquisitive 5-year-old, as well as my 8-year-old, won’t soon forget.

But the same could be said of their parents, too.