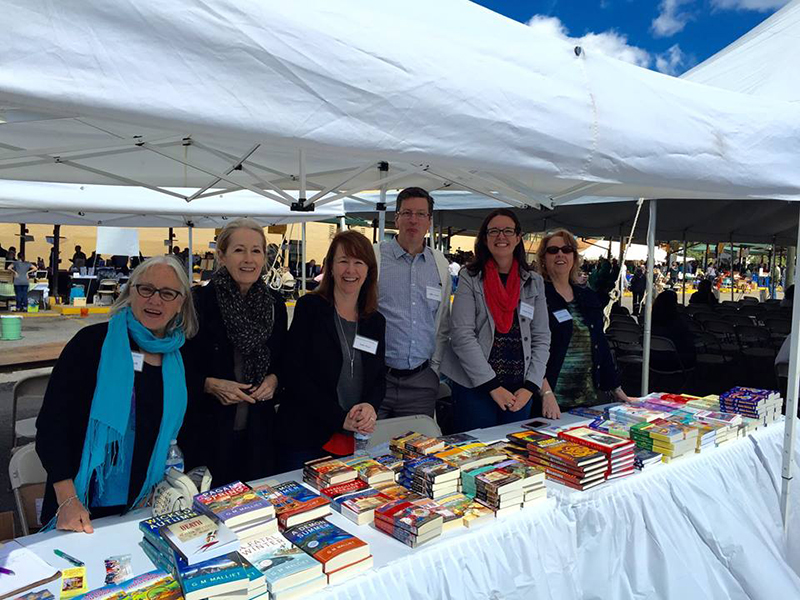 An array of books and authors from last year's BookFest.

You needn’t pack a suitcase to attend the 2016 Kerrytown BookFest’s “Travels with Books” programs; you just need a sense of adventure and a passion for the written word.

Yes, the 14th annual BookFest, happening Sunday, September 11 from 10:30 am to 5 pm at the Ann Arbor Farmers’ Market and Kerrytown Concert House, is a free celebration of authors, books, bookmaking and more, with events and activities for kids, too.

The day kicks off with coffee and doughnuts, as well a short presentation of the 9th annual Community Book Award; this year’s recipient is Washtenaw Literacy, which provides literacy support, free of charge, to adults by way of trained tutors.

“That was a pretty easy decision,” said KBF president and Aunt Agatha’s Book Shop co-owner Robin Agnew. “There was unanimous agreement. It’s a great organization, and they’re now celebrating their 40th year of doing great things in our community.”

In keeping with the “Travels with Books” theme, “Under the Radar Michigan”’s Tom Daldin will talk at 11 am about the some of the state’s best-kept secrets, which he regularly explores on his PBS series.

But you might wonder: does each BookFest’s theme come first as an organizing principle, or does the BookFest team connect the dots as guest speakers are lined up for the following year?

“Kind of both,” said Agnew. “It’s pretty organic. … It has to be general, or it’s too hard to program things around it. But last year, Daldin was one of the first people we booked, so we chose ‘Travels with Books’ and thought it sounded like a fun theme.”

This year’s KBF writer-in-residence is Huron High teacher and author R.J. Fox (Love & Vodka), who will be critiquing attendee-submitted manuscripts. All the slots for this program are already full, but there’s still a book fair, author signings, and some enticing panel discussions to check out.

“I always have some spidey sense about what people are most excited about, and this year, I think [mystery writer William Kent Krueger will be a big draw, because he’s got a new book out,” Agnew said, referring to Krueger’s Manitou Canyon. “But I also think the identity quest panel will be pretty popular. It’s an interesting group.”

The panel, titled “The Quest for Identity,” features Desiree Cooper (Know the Mother), Kelly Fordon (Garden of the Blind), and Andrew Mozina (Contrary Motion) talking about their work with moderator Donald Lystra (Something That Feels Like Truth). 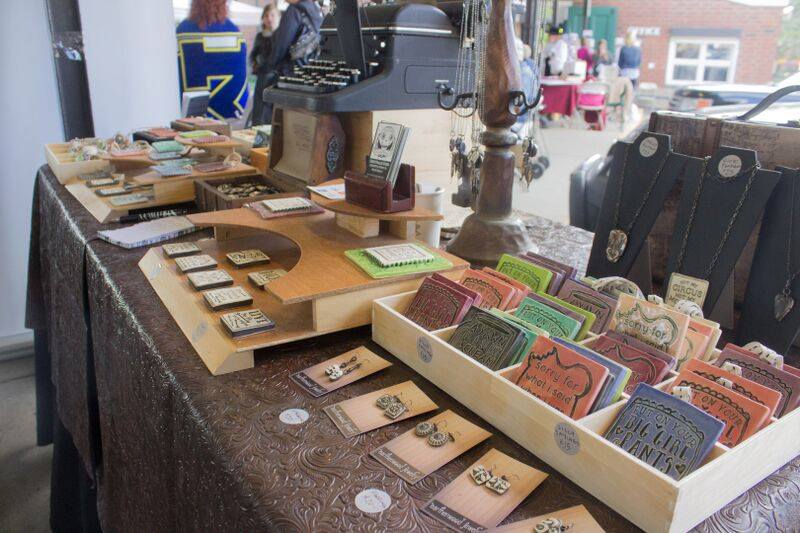 Items for sale at the Kerrytown BookFest.

Other events include a thriller writer (Brian Freeman) sharing photos from a domestic “photo safari” that informs how he uses settings in his fiction; a “Travel the Lakes” featuring writers Loreen Niewenhuis and Maureen Dunphy discussing their Great Lakes adventures; Eating Wildly author Ava Chin, who will speak about urban foraging (and Food Gatherers will be accepting donations on-site); and a pragmatic talk called “Writing for Hire,” during which three writers will talk about the myriad ways they support themselves through writing.

“That panel is going to be so good,” said Agnew, noting that the panelists wrote under multiple names and did projects as various as Goosebumps installments, sci-fi and mystery books-for-hire, and flashcards.

But one talk that Agnew herself is most excited about it “Travel through Time,” featuring novelist B. A. Shapiro (The Art Forger and The Muralist).

The children’s tent will host a Mother Goose program, author readings, storytellers, a craft, and a drawing workshop.

Regular KBF attendees may notice one new addition this year. “It’s not a big thing, but people will see ‘The Book I Love’ signs, with slips to fill out. Every bookstore will have a box or a table devoted to it, and we’ll probably share some of the responses on social media or the website. We may even have a panel about it next year.”

So bookmark your latest read for a while and head to Kerrytown on September 11th!