Review: Falling Up and Getting Down, UMS Season-Opening Live Skateboarding + Music Celebration 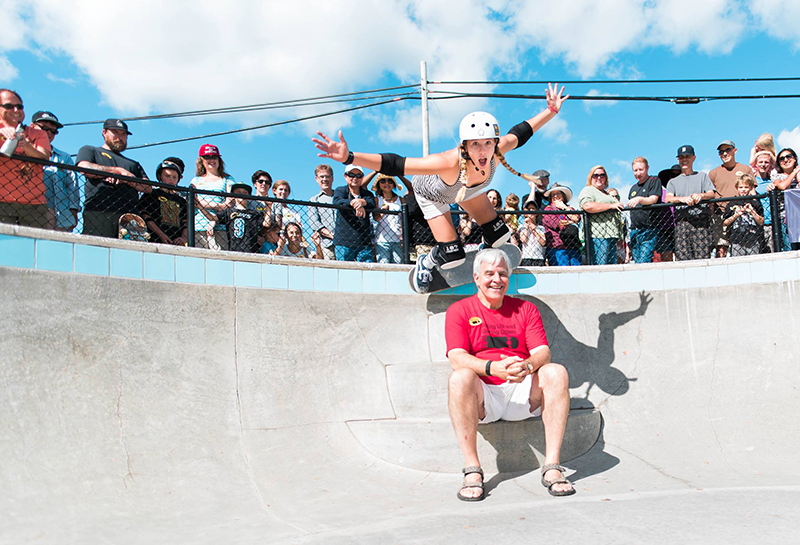 The professional skateboarders at Falling Up and Getting Down, University Musical Society’s (UMS) season-opening event on Sunday, September 11, at Ann Arbor Skatepark, riveting as they were, were just part of the event's attraction. Jazz trio Jason Moran and the Bandwagon, joined by saxophonist Ingrid Laubrock, were improvising on a stage behind the bowl. Instruments were in conversation with each other, and the conversation included the skaters too.

The skaters’ own improvisations didn’t respond to individual musical statements, at least not that I could perceive; rather, the feel of the music infused all the skating with its particular energy. The edge of the stage proved a highly permeable boundary between music and skateboards; skater Chuck Treece joined the Bandwagon on guitar and skater Ron Allen took the mike to layer rhyme over the music. Early on, Tom Remillard launched himself up and over the lip of the pool to briefly plant a foot on the edge of the stage before hurling himself back down the steep face of the pool like a wheeled stage diver, a maneuver that other skaters riffed on later.

The skaters were the main attraction for me. Having surfed but never been on a skateboard, I imagined their ride to be like catching one constant wave. What a rush it must be, plunging down into the trough of the concrete “bowl” and then decelerating as they ride up its concave side. Sometimes they immediately cut down again, sometimes they skated along the crest, sometimes they hit a divine moment of suspension at the top—airborne, or upside-down balanced on one hand, the other hand fixing the board to the soles of their feet. There was wow-inducing virtuosity (and good-natured rebounds out of the failed attempts at that virtuosity), but what I found most hypnotic was the fact of the ride: that ongoing forward propulsion, and the pendulum energy of their recurring drops into and ascents out of the bowl.

Hot skateboarders and hot music together: that’s a lot going on. But there was still more, something about the people assembled in the park. “Community” comes to mind, but I rush to justify that worn-out word and provide examples of what I have in mind. My twelve-year-old daughter attended a girls-only skateboard session in the morning and got personal instruction from 17-year-old pro Jordyn Barratt. At the event, Barratt mugged for a photographer as she rode her board in an arc over the head of Ken Fischer, UMS President, who was seated at the bottom of the bowl. My daughter was star-struck (over Barratt, not Fischer!), telling me how cool Jordyn is and, I think, hoping to catch her eye. Meanwhile, local skaters weaved among the pros.

There was a sociable, we’re-all-here-together vibe, and that must be at least partially attributed to UMS’s desire to “give back to the community” with this event. “Community” often means connecting with audiences outside the older, wealthier population usually associated with concert halls, and if that’s the definition in operation here, certain elements of Falling Up and Getting Down were particularly effective. It was free and in a public park. The “free” part is not to be underestimated, especially given the often-prohibitive price tag on concerts in theaters. The “public park” part is also powerful; this was not just any public park with lawns and swing-sets, but a skatepark with cement hills and paths and loops.

There were also a fair number of teenagers, and tattoos, punk rock t-shirts, Chuck Taylor sneakers, and dreadlocks, alongside people with grey hair, tailored clothing, and sensible shoes. I acknowledge how odious generalizations based on appearances are, but admit that I surmised that this older set came for the jazz more than the skateboarding. The fact remains, though, that there were assembled people who looked really different from one another, and their difference was made more striking by the fact that they were side by side at the skatepark. We were all listening to the Bandwagon, and regardless of who considers themselves jazz connoisseurs or knows Jason Moran’s reputation, the sounds they conjured were bewitching. We were all watching the skateboarders fly, and regardless of whether you’ve ever heard of Tom Remillard, it was inspiring and gladdening. 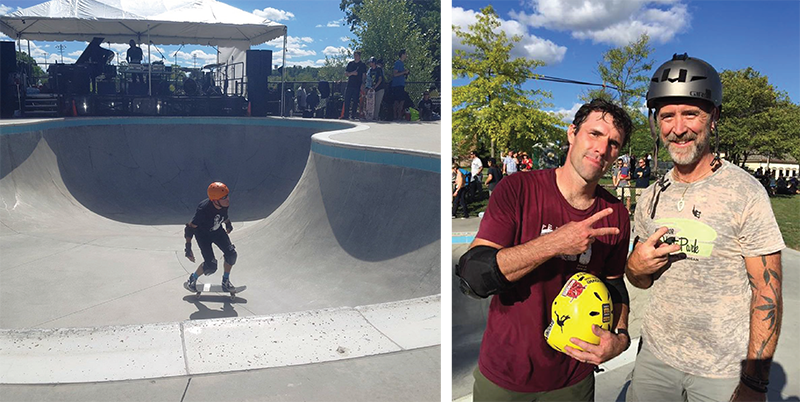 My husband, impressed with the scene, commented how cool it is that our town has a skatepark, that when he was a teenager, skateboarding was on par with doing drugs, wearing black leather jackets, and generally getting in trouble. Skateboarding was not just teenagers, it was bad teenagers; any business with a promisingly inclined stretch of sidewalk posted a prominent “no skateboards” sign. Some of that has obviously changed, either with the time or the place; witness the number of people of all ages on skateboards and the family-friendly vibe at Ann Arbor Skatepark. However, skateboarding still has a reputation and often a feel of angry rebellion and intimidating cool; pro-skateboarder Andy Macdonald’s clean-cut image is an exception that the press makes much of, and I feel instantly old, dowdy, lame, and conservative when I encounter skateboarders on the street.

And the skateboarders didn’t seem off-puttingly cool; they offered one another encouraging high-fives and praise, and shared the limelight with respectful turn-taking. If the situation were reversed, I hope that the clothing and attitudes of the concert hall that might be intimidating to outsiders would be similarly mitigated by friendly and polite interaction.

Anyway, it was a situation in which people of apparent difference found common ground—a true and apt definition of community, compelling me to remove the cynical quotation marks from around that word. While the unusual combination of jazz improvisation and skateboarding—both of the highest quality—was the attraction that drew these people, I think the secret ingredient that enabled this particular instance of community was the setting: the shared public space. And so, I’m impressed with my new home, not just for bringing Jason Moran and Andy Macdonald here, but for bringing them together and for making this happen free of charge in a public venue.

Wonderful description of what