Review: Re: Formation at the Ann Arbor Art Center 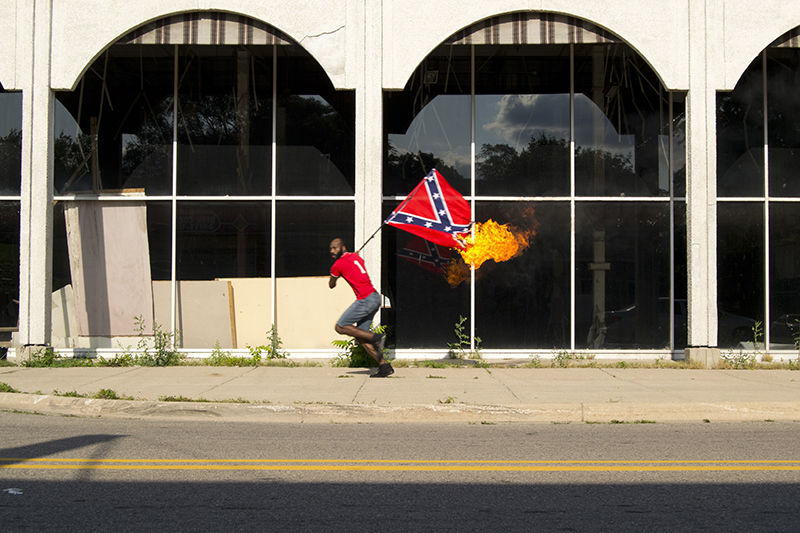 The Ann Arbor Art Center’s latest exhibit is the Re: Formation to help begin all reformations.

As the exhibit’s statement tells us, the display “examines this unique moment [in history] when ordinary people are declaring a la Peter Finch [from Sidney Lumet’s 1977 film Network]: “‘I’m mad as hell and I won’t take it anymore.’”

This is indeed the precise sentiment of this unceasingly clever exhibit of art.

For Re: Formation, the latest offering of Rocco DePietro and Gloria Pritschet, founders and directors of the Gallery Project, follows suit with this artful duo’s willingness to go where most other forums fear to tread. Ann Arbor's Art Center exhibit pairs with an earlier August incarnation of the show exhibited through the auspices of Toledo, OH’s Art Commission.

As the exhibit statement continues, “What is different at this time is that people who have been silent, or silenced, are standing up, speaking out, and mobilizing for needed change. Highly divergent in life styles with broad-ranging backgrounds, beliefs, and values, these individuals are expressing justifiable anger at the accumulation of horrific events and unrelenting injustices that characterize our current era.

“They are teaming up across race, gender, politics, and social status with empathy and compassion for their fellow human beings. Their actions are reestablishing belief in a positive future based on fairness, equity, and genuine possibility for all.

“Is this a tipping point, a moment for reform, or even a revolution? Or is it just another blip before capitulation and regression?”

Because of course, the definition of art itself is being challenged in Re: Formation. What is the purpose of art? Is it meant to merely have a decorative function? Or is it meant to provoke and challenge one’s preconceptions?

The Gallery Project is letting us know what they think, and towards this end DePietro and Pritschet have mobilized a formidable array of national, regional, and local talent whose outlooks cut across a whole host of social, political, and cultural viewpoints. There are (to borrow from a questionable cliché) no sacred cows here. And even if there were, it would be just as many of the artists on display who would want to devour it as there are others who would hold it sacred.

Among the works on display, Azzaro gives us a potent taste of Re: Formation’s disposition. His unframed “Progress at the Ol’ Smith Furniture Building” color photograph touches on all the ideas stated in the exhibition’s gallery statement.

There are, of course, Americans who to this day think of the Confederate States of America’s second Battle Flag as a sacred totem of historic significance with as much a symbolic value as the United States’ stars and stripes. Indeed, these stars and bars—in either its peace or war confederate configuration—are still part of the symbol (and considered a venerated heritage) in parts of the American south and officially designated in three southern states.

But the flag is also a highly potent symbol of a heritage that is itself emblematic of one of the most controversial aspects of our republic’s heritage. Representative of the defense of slavery as a political institution, the Dixie Battle Flag serves as a visceral reminder of attitudes that cut across economic, social, and cultural lines. As such it’s not uncommon to find the flag on private property such as flag pole or car—now often in a setting that is seemingly as much defiance as it is supportive.

Thus Azzaro’s photograph transgresses these values by vividly appropriating the symbol and subverting its erstwhile significance. Running across a dilapidated storefront with this flag in flames, “Progress at the Ol’ Smith Furniture Building” is a straightforward, aggressive recasting of social, economic, political, and cultural American expectations.

Just like many other artworks on display in this highly emotionally charged exhibit, if Azzaro’s “Progress at the Ol’ Smith Furniture Building” isn’t a Re: Formation of American expectations, it’s hard to imagine what might be.