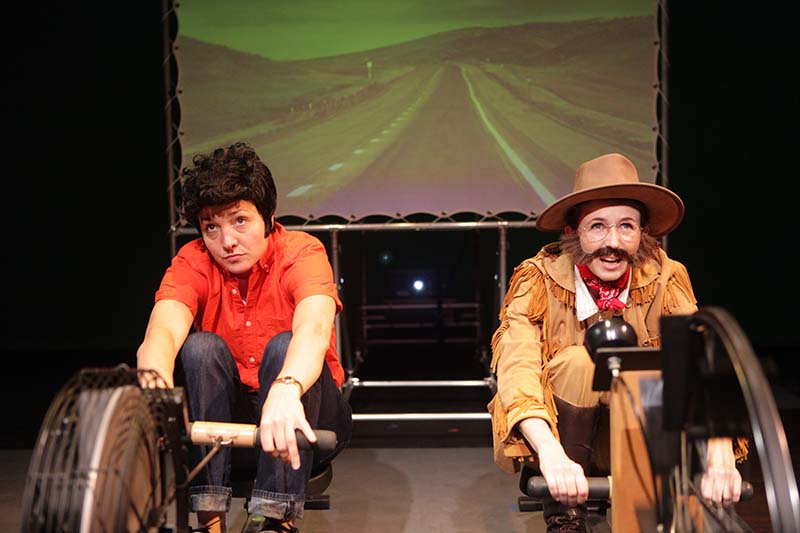 One unforgiving truth of fame is that when you become larger-than-life, you’re also conversely diminished, so as to seem elusively inhuman.

Brooklyn-based The TEAM’s experimental theater production RoosevElvis, now playing in Ann Arbor by way of University Musical Society, begins with a scene that illustrates this very point. Theodore Roosevelt (Kristen Sieh) and Elvis Presley (Libby King) sit next to one another in director’s chairs, sharing a microphone between them as they take turns voicing odd autobiographical facts and anecdotes.

Significantly, the back-and-forth doesn’t feel like two competitors trying to one-up each other – yes, Roosevelt stridently brags, but Elvis isn’t intimidated, blithely contributing his more modest memories with a laid back slouch. In this way, the exchange illustrates key differences between the two icons of American masculinity.

Sieh, decked out in Roosevelt’s trademark facial hair and glasses, as well as a fringed cowhide suit (Sieh designed the shows costumes as well), employs a sharp patrician delivery that echoes Katherine Hepburn. We hear about Harvard, and how he won an election at age 23. “What a great story,” she says often, congratulating herself.

King, as Elvis, wears blue suede shoes (of course), jeans, a white T-shirt, and a red, short-sleeved button down shirt, topped with a modest Elvis wig, of course. Far more retiring and relaxed than Roosevelt, Elvis talks about being an only child, moving to Memphis, and hearing his first record played nine times in a row on the radio.

But after this introduction, the green screen behind them disappears to reveal the drab apartment of Ann (King), a shy, lonely, 35 year old meat-packing plant employee in Rapid City, South Dakota. (During the transition, you see video footage of her at her workplace.) As Ann, King enters the apartment with a 6 pack, drinks a beer, and engages in a one-person conversation between herself and her idol, Elvis, about having, for the first time, connected with a woman via the Internet. Soon Brenda (Sieh), as a self-assured taxidermist who’s in town for a conference, emerges wrapped in an Elvis towel from the bathroom.

So yes, it takes a few minutes to get your bearings while watching RoosevElvis – and, fair warning, you likely never will completely. But that’s the aim of experimental work, of course. You have to let go of the desire/expectation for linearity and absorb all the ideas and trippy images that are playing out in front of you on stage.

Even so, there is at least a loose narrative at the center of RoosevElvis: Ann’s hopeful, extended date with Brenda – a Roosevelt fan, not coincidentally – turns sour as the two women take a road trip to the Badlands, including stops at Mt. Rushmore and Wall Drug. Though the show relies a bit too heavily on Andrew Schneider’s backdrop videos, the clips are often used in interesting ways. For instance, when Ann recoils from Brenda’s sexual candor in a diner, two video screens show the two women eating their meal in silence, thus underscoring the fact that what began as a hopeful adventure into love has ended in an uncomfortable, miserable stalemate.

Roosevelt and Elvis appear to have earned a place in Ann’s psyche because they embody ideals of masculinity, and as a woman who wears men’s Y-front briefs, and feels like “one of the guys” among the men working at her side at the meat packing plant, Ann is working through who she is, and whom she wants to be. Plus, her rough break-up with forthright, Roosevelt-like Brenda, who calls her “un-brave,” rattles her enough to drive her to take a solo trip to Graceland. Along the way, she leaves Roosevelt and Elvis behind in a hotel room, which they know bodes well for Ann; but when left with just each other, they clash and criticize each other, exiting with the classic line, “Let’s take this outside.”

There are many other delightful, strange, surprising moments in RoosevElvis, wittily directed by Rachel Chavkin: Sieh’s Roosevelt ballet, in which a gentle, beautiful grace is combined with showy muscle-flexing; a sudden, one-off Ann-Margaret moment; Roosevelt pulling on boxing gloves and calling for a TEAM member to start the footage from “Planet Earth,” so that he may punch at the bison individually on-screen (hysterical); Sieh’s funny, uncanny portrayal of a Spirit Airlines representative, urging Ann to stay on hold; the thoughtful use of rowing machines as a set piece (the set was designed by Nick Vaughan); and a Thelma & Louise tie-in that’s far more than a pop culture wink.

But King is the show’s emotional core, and she delivers a dignity, a humility, and a hunger that’s palpable, both in Elvis and Ann. That’s not to say that every part of the show hits its mark. With a running time of just over 90 minutes, the show feels oddly labored after a while, particularly following Brenda and Ann’s final, bracing phone conversation. And there’s a brief scene in which King and Sieh transform into diner waitresses for just a moment – and I still don’t know what purpose that served.

That’s OK, though. When an innovative theatrical company like The TEAM goes on an adventure and asks you to come along, I think it’s mostly worth the bumps in the road to experience the ride.