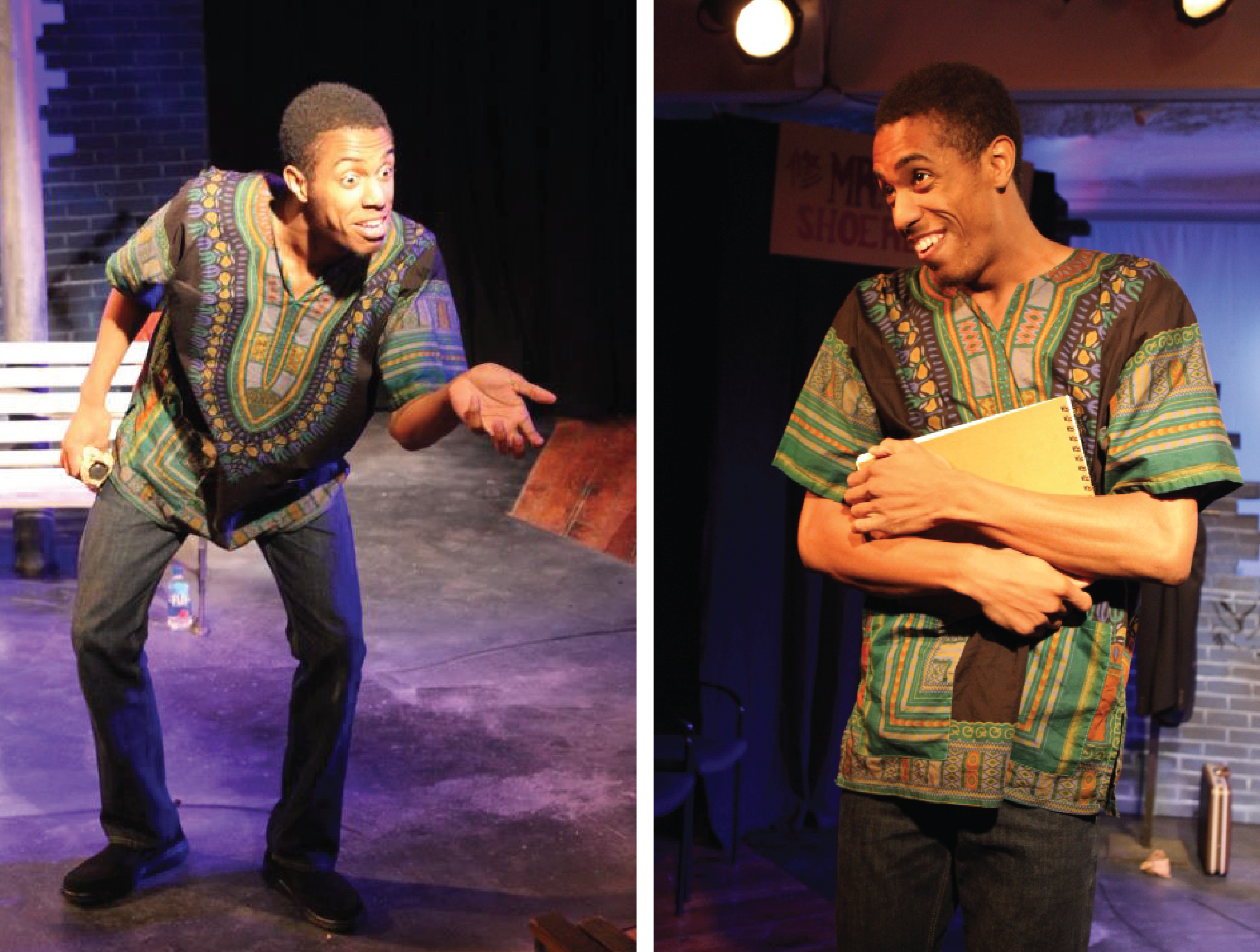 While watching Daniel Beaty’s play Mr. Joy at Theatre Nova, I immediately thought of Yong Kim, the owner of Mary’s Fabulous Chicken and Fish in Ann Arbor, who was robbed and brutally beaten with a plastic milk crate while walking to his car from the restaurant in 2014. Kim was 74 at the time of his attack, and the assailants turned out to be two teenage boys.

According to press reports, Kim managed to do something many of us would struggle mightily to do: he forgave his attackers.

Mr. Joy tells a similar story, through the prism of one actor playing several characters. In the play, longtime Harlem shoe repair shop owner Mr. Kim is robbed and beaten one night, but he won’t tell the police who his attacker was. And while Mr. Joy is the play’s nucleus, we never actually see him. Instead, we hear perspectives from those whose lives he’s touched: a homeless former painter; an 11 year old girl from the projects with AIDS, Clarissa, who considers herself his apprentice; Clarissa’s feisty grandmother; Clarissa’s schoolyard boyfriend, Peter; a young poet, DeShawn, who finds hope at church; Mr. Joy’s Ivy League-educated, real estate dealer son; the son’s rich, black Republican boss; the boss’ white girlfriend, who yearns for a child; and the boss’ transgender, flight attendant daughter, Ashes.

The hands-down best thing about Mr. Joy is seeing actor Matthew Webb embody each of the play’s characters with tremendous focus, care, and zeal. With an assist from director Billicia Hines’ guiding hand, Webb uses minimal costume changes and props – a notebook, a blazer and briefcase, a pair of red pumps, etc. – and efficient physical cues, like posture and gait, in addition to vocal inflection, to delineate the transitions between characters, and the effect is powerful. Despite the number of characters, and despite a couple of them earning a tenuous-at-best place in the narrative, Theatre Nova’s production never lacks clarity, and Webb’s performance is truly gripping to behold. (Those who previously saw the actor perform in TN’s I and Thou will leave Mr. Joy a much deeper appreciation for his talents and versatility.)

That said, Beaty’s play itself doesn’t provide much that’s bracing or new or thought-provoking regarding our ongoing national discussion of race, class, and inequality in America. Yes, there are moments of both sweetness and pain in the show; and DeShawn, in one scene, performs an impassioned performance poem that taps into the rage and fear and frustration of the community.

But we also hear familiar banalities from Grandma Bessie about faith, and how important it is to make the effort to talk to people; we see a character who will forever define himself by his own worst act – yet it’s hard to believe he even committed the crime, based on the short glimpses we’re shown of him, so the play’s “big reveal” feels instead like an unsatisfying, unearned authorial shortcut.

And finally, we have a politically conservative black man’s self-imposed estrangement from his child, born a son, because he chooses to undergo surgery to become a woman. This level of emotional complexity demands a play unto itself, frankly, in order to really dig into the issues involved; getting the drive-by version inevitably falls short.

Set designer Kelsey Nowak keeps things simple, with a busted brick wall backdrop (in front of a screen for occasional projections), a bench, milk cartons, a stool, a coat stand, a store sign, and a raised corner for Mr. Joy’s regular customers to leave shoes as a kind of prayer for his recovery. Daniel C. Walker lights the show beautifully, signaling character and mood transitions. And costume designer Carla Milarch (who also designed the show’s sound) found clothes that were neutral, but also wholly appropriate, for Webb to wear as he navigates between a broad variety of characters.

I’ll confess Theatre Nova’s design elements, paired with Webb’s powerhouse performance, had me seduced as the lights came up; but the more I thought (and wrote) about the play, the more I couldn’t overlook the script’s shortcomings. For unlike Ta-Nehisi Coates’ invigorating, harrowing, brutally honest book Between the World and Me – a letter to Coates’ son about growing up as an endangered black man in America – Mr. Joy never takes the risks necessary to push us into new, uncharted territory in regard to talking about race; and that’s precisely where we need to go if anything’s going to change.