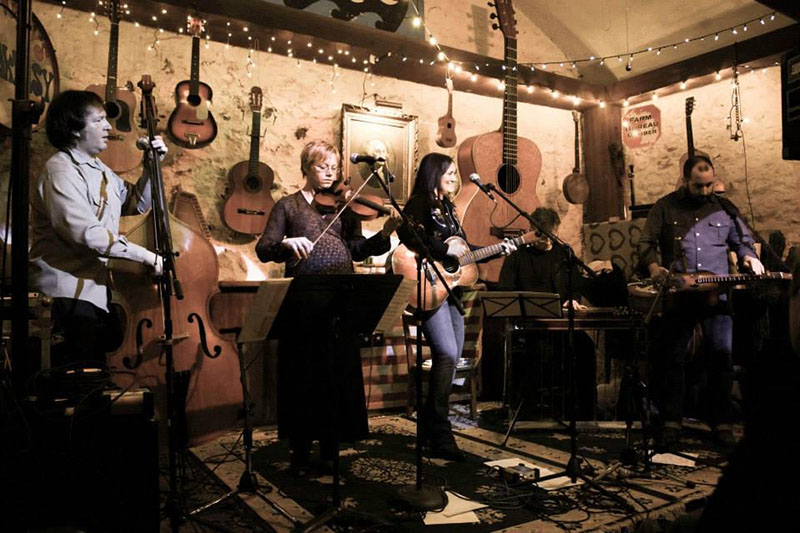 By day she's a therapist and the Executive Director of the local Center for Eating Disorders. But on more occasions lately, Judy Banker continues her ascent as one of the brightest stars on the acoustic music scene, writing her own songs, playing exuberant music on her guitar, and vocalizing lyrics that have a universal appeal.

It’s no stretch to say that Judy Banker is ultimately so happy when performing it all seems completely natural. Her enthusiasm and sheer elation while playing her music is infectious and evident. Her radiant smile and stage presence has made her popular, leaving her fans and admirers asking for more. She possesses that rare combination of charisma and charm, along with a healthy injection of musicianship that seems so organic and soul driven, not produced in any way, shape or form.

At the last three editions of Nash Bash in the Kerrytown Farmer’s Market, Banker has been a shining star, eliciting the remark from Kerrytown Concert House’s Deanna Relyea that she “now can’t imagine a Nash Bash without Judy Banker.” Singing as a member of the Bill Edwards group for a scant few years as she did at the recent Nash Bash, but also extensive time working with Jay Stielstra, she’s now become a leader in her own right with encouragement from Stielstra and friends who recognize her singularly unique talent and stage presence.

Making her way from her native Manitowoc, Wisconsin west of Milwaukee to Ann Arbor, Banker is living proof that life’s lessons and feeling one’s own share of personal blues can turn into positive messages and the kind of music anyone can relate to - no matter their lot in this human condition of America. Inspired by similar artists of the 1960s, Banker writes songs with a more creatively complex vision, yet with simple and easy to understand lyrics. She’s already written several that could be considered classics, like the tune prompted by a comment from her son, the title track on her debut CD Devils Don’t Cry, “If You Could Read My Mind” (not the Gordon Lightfoot hit), “Feet Of Clay,” and the deeply poignant “Regrets." Devils Don’t Cry is a complete compendium of the twists and turns anyone might face, turned into a delightful and at times heart-weary mix of cautionary tales and tonics for the troops. The initial CD could perhaps see a follow-up soon - she has more material laying in wait - but her first effort could easily be issued on any major folk music label. It’s that good.

Initially Influenced by the likes of The Beatles, Bob Dylan, Peter, Paul & Mary, Joan Baez and Joni Mitchell, Banker’s music is neither stern nor ethereal, yet she retains threads of some of those values, along with a heart that professionally and musically wants wrongs to be righted. She is also not strictly urban or rural, but takes in elements of simplicity and sophistication to make music that is clearly all her own.

In a recent interview, Judy Banker talked about the inspiration behind her personalized story/songs. “I want to express this complex of emotions in a thought. It’s continually fascinating to me how right and wrong are so hard to decipher - it’s all a point of view. It isn’t really hard to pick a subject. I will look back on something that I’m stuck on or can’t figure out."

As a player, she started on a cheap guitar, and, along with her older brother, took lessons. “We played piano as kids. We learned chords in the key of C and G, then our teacher said that was all he knew. Then we had a cover band in middle school.” She also mentioned Joni Mitchell and had all of her albums: “Her writing is incredible, but I didn’t play her songs because I didn’t know the chords. It was outside of my Mel Bay music book. Some of my melodies have that feeling."

When asked where her songwriting can go she admits this is an early foray, as she’s been doing it for only four years. “What I imagine - the area that I’ll branch off into - is working on other people’s stories more. I hear people’s stories all the time - the battles that women go through all the time. I haven’t written anything political or about disenfranchised groups. I wouldn’t rule that out, it’s something I’m passionate about and care about - people who are being battered by our culture."

Banker is delighted with her audience response, feeds off it, and is interested in taking it to a higher level. Once again, her happiness quotient on stage is shared with her listeners. “I would love to channel bringing joy to people’s lives in a substantial way instead of, say, buying them a new toy. Helping people clear out some of the gunk and have better lives - I’ve dedicated my whole life to that."

The Judy Banker Band performs at 7:30 pm on Thursday, October 6 at Johnny’s Speakeasy, 2923 Dexter Ave. on Ann Arbor’s far west side. E-mail only for reservations at johnnyspeakez@gmail.com. Seating is limited. The neighborhood has little if any local parking, so promoters are providing a shuttle between Plum Market in the Westgate Shopping area and The Speakeasy to easily access the show. Board from 6:30-7 pm. E-mail a reservation for the shuttle at judithbanker@gmail .com.