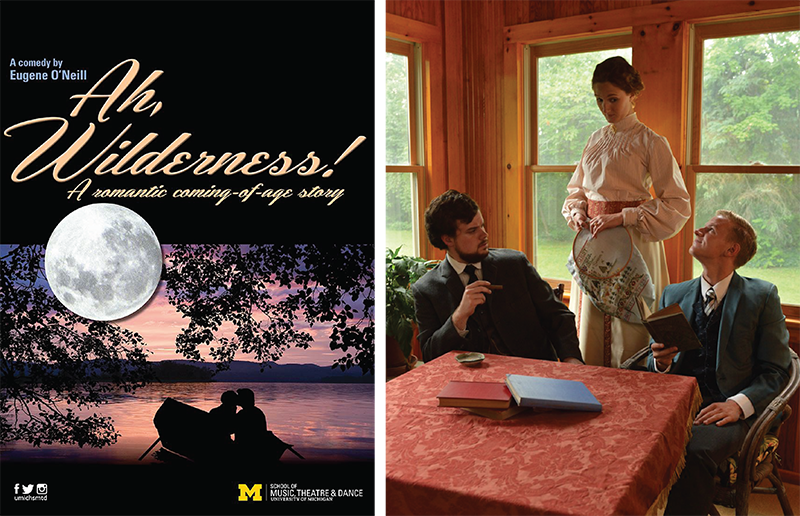 From Left to Right - Nat (Liam Loomer) and Essie Miller (Larissa Marten) question their son Richard (Kevin Corbett) about his fondness for European authors in the romantic comedy Ah, Wilderness! by Eugene O’Neill presented by the U-M School of Music, Theatre & Dance, Department of Theatre & Drama. / Photo by Peter Smith.

Ah, Wilderness! is an outlier among Eugene O’Neill’s plays, usually full of painful truth telling. It’s a summertime comedy, nostalgic for the youth the playwright never had. Its humor is soft and warm but it is also a quiet reflection on the limits of freedom, set appropriately on the Fourth of July.

The play offers two challenges to a university theater company. It is set in 1906, a time that O’Neill romanticizes as a period of innocence and propriety under assault, a time far removed from now. It is also a family play, in which most of the characters are younger or quite a bit older than the student actors.

The University of Michigan School of Music, Theatre and Dance cast under the direction of John Neville-Andrews tries hard to create a semblance of an early 20th century family but seems stiff, corseted in their roles and their interplay with each other. This play depends on that interplay, but in this production only a few scenes capture what O’Neill was about.

The Millers of a “large small town” in Connecticut are a solidly middle class clan. Father Nat is the owner of the local newspaper, his wife, Essie, is the dominant figure at home and a stickler for moral values. They have four children, Arthur, a Yale student; Mildred, a modern young woman; Richard, an emerging firebrand; and young Tommy, a firecracker in more ways than one.

Another main character is Essie’s brother Sid. Uncle Sid is a cautionary tale, an alcoholic with a good heart and a crippling weakness. Sid is the object of Nat’s sister Lily’s affection and deep disappointment.

The Fourth is a holiday dedicated to celebrating a revolution and the ideas it helped take hold. But Richard is a classic naïf, a 16-year-old boy anxious to get on with becoming a man and ready to take that first step into naughty rebellion.

This production never settles into a comfortable give and take. The actors seem too often to be reciting and moving stiffly about. The gentle humor is often lost and the humor that is meant to be forced and awkward is never separated from all the rest. The actors seem to have trouble playing the middle aged characters authentically and fall back on stiff mannerisms of an earlier time. But there are good moments and solid effort.

Kevin Corbett gives Richard Miller the right amount of "gee whiz" enthusiasm for the swirl of ideas in his head and he has some good comic moments as he goes to the “dark side” in his encounter with a brassy lady of the night. But even he doesn’t quite capture the giddiness and fear of a boy on the cusp of manhood.

Larissa Marten has every bit the look of a strong matriarch as Essie. She’s tall with an attractive face made stern from admonishing her children. She also has a commanding voice. But her performance is stiff, missing the humor intended under what she says and posing too often. Essie is more than she seems as we see later in the play, but we get few suggestions of that early on.

Liam Loomer brings honest warmth to the role of Nat. He struggles to relax into a real middle-aged man and is forced into playing with cigars and pipes and too much joie de vivre. He does a fine bit of physical comedy in a scene with Corbett where he struggles to explain the “facts of life.” Loomer also has an uncanny resemblance to a young Orson Welles.

Oren Steiner probably has the hardest role in the play as Uncle Sid. Sid is a one-time valued newspaper reporter brought down by a weakness for alcohol. Despite his weakness, Sid is a lovable drunk, not the usual mess found in other O’Neill plays. Steiner does a good job of melding the two sides of Sid and brings some sweet interplay with his nephew Richard after Richard’s night out. But a lot of the humor that is sad/funny about Uncle Sid doesn’t come through and seems, again, stiff and labored.

Amy Aaron as the long-suffering Lily is fairly convincing but looks far too young for the part and lacks the nervousness that seems intended in a character defined as “poor spinster” forced to take shelter in her brother’s house while pining for desolate Sid.

Juliana Tassos plays the brassy prostitute with a nod to Mae West and a squawky voice. Morgan Waggoner is the ethereal Muriel. She gets the tension between desire and rectitude as the play becomes a poetic valentine.

A couple actors seem a bit more relaxed in their performances. Sarah Prendergast plays sister Mildred with a breezy good humor and no posed mannerisms. Eddie Williams as a shifty bartender is also natural as he seems to glide across the barroom.

Ah, Wilderness! was a sweet spot to which O’Neill never ventured again. His family plays in the future would be dark and brooding and even more revolutionary than Wilde, Shaw or Omar Khayyam. But even here he raised some real issues about the limits of freedom and the value of restraint when it comes in the warm embrace of a loving and upright family.