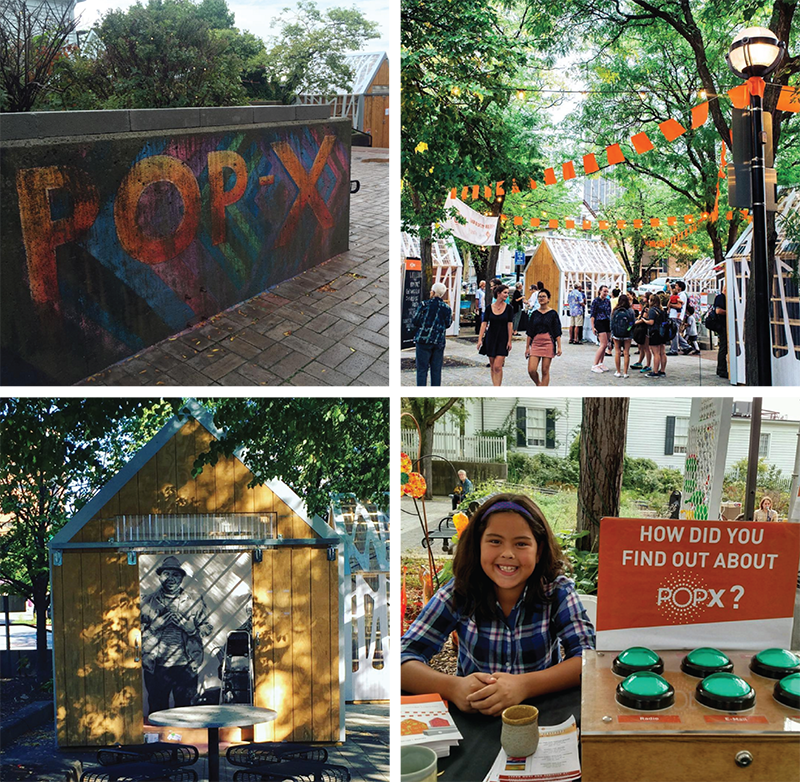 It may sound like lofty praise, but it’s becoming readily apparent that POP•X is one of the most important events on the contemporary Ann Arbor visual arts calendar. It’s a curious blend of some of our most talented arts groups and individual artists tacitly stepping out of their comfort zone.

The polish and professionalism on display in the installation site was POP•X 2016’s conventional strength—and its non-conformity was the fact that the event took place at all. While this seeming contradiction may be paradoxical to some, it follows seamlessly (perhaps even providentially) from a trajectory that fits the mood of our time.

For the fact is: POP•X fills a gap in our local visual arts that’s been all-too-lacking for some time on our arts calendar. Tucked nicely in downtown’s Liberty Plaza, the installation site was as tidy and manageable as an arts event could be in contrast to the overwhelming behemoth that annually invades Ann Arbor over the course of a week in July. That massive congregation may be ostensibly devoted to the arts, but it’s not really about art. Rather it’s a merchandizing juggernaut that allows the entire community to celebrate the idea of art.

By contrast, POP•X 2016 is a different thing altogether. It partakes of the slightly off-kilter vibe of the mid-20th century “happening.” Granted, it’s far tamer than the Allan Kaprow inspired performance art which sought to perplex as much as it meant to elucidate. But then again, everything slows down as it matures.

There’s instead a touch of the provocateur in POP•X 2016. And the art is of sufficient quality as to gently mask this tension. Instead, as would have been noted by the countercultural Fluxus group of this same mid-20th century period, it’s the sheer concreteness of POP•X that democratizes the activity. There’s no artificial boundary to the event (outside of its physical boundary) because the only border to POP•X 2016 is territorial and this is a logistical distinction.

Whether referencing Kaprow’s performance art or Fluxus’ abstraction, it was one of Neo-Dada's conceits that art be taken off the wall—Pop Art, Environmental Art, Conceptual Art, Optical Art, and other likeminded art forms of this stripe—sought to reinterpret the concept of art altogether. Yet one of the aesthetic ironies of Modernism was that even these kinds of art were still typically found confined to the gallery setting with all the expectations of such pretensions.

Let’s just suffice to say POP•X 2016 bursts though the aesthetic fourth wall of the gallery mentality by gleefully setting up shop outdoors and letting the setting itself serve its basis. But the conventionality of the “art” market has also restricted the possibilities of democratizing the aesthetic potential.

By contrast, POP•X effectively uses the conventions of art to work in an allied configuration that expands these possibilities. Indeed, it’s likely (on the presumption that Ann Arbor is wise enough to continue in this vein) that the possibilities of POP•X have not really yet been broached.

If only for the reasons mentioned above: There’s a homey feel to the POP•X 2016 spirit that’s channeled through the professionalism of the artists and art groups on display. The impulse is clearly there: For example, Lisa Waud’s incarnation of her Detroit-based Flower House utilized her installation to craft a display of nature that threatened to burst from its confine. And although it was based on the limitation of its video monitors, there is a remarkable amount of possible expansion in Donald Harrison and Martin Thoburn’s invigorating four-channel installation roaming Ann Arbor from each direction via its Liberty Plaza starting point.

Effectively—and, again, presuming our arts community is wise enough to build on this remarkably dexterous POP•X format—we still haven’t seen what POP•X 2016 can really be. The possibilities are there; just as the evolution of the village lies in the flexibility of the pavilion format. And this is the most exciting—as well as most important—element of the format.

As is evident from other places and events, contemporary art is clearly reconsidering itself at this time through the adventurousness of its practitioners. It was most evident in the mid-to-late 20th century through the reincarnation of ceramics, fabrics, and functional design.

This is the fundamental and continual challenge of all aesthetics. And POP•X is on the vanguard of this most recent artful transition. So the only real question then is what this change can be?

Because if POP•X 2106 is any indication, we don’t really know yet. For it’ll be the task of our local artists and arts groups as well as visionaries like the Ann Arbor Art Center’s Omari Rush to nurture the concept through its possible growth.

Rather than hope that we see a POP•X again—think in terms of how we see it again. For this is the test of the visual arts.

POP•X is an annual ten-day festival presented by the Ann Arbor Art Center. POP•X 2016 was Thursday, September 22 through Saturday October 1, 2016 from noon to 8pm at Liberty Plaza Park, 255 East Liberty St, Ann Arbor. To learn more visit popxannarbor.com or the POP•X Facebook event page. POP•X is free and open to the public.
Sign in to comment