It's official – ArtPrize 8, the "radically open international art competition" in Grand Rapids, Michigan, now boasts the largest attendance to an art event on planet Earth. The 19-day event is now over for this year, the votes have been tallied and the 2 Grand Prize Winners (as well as the winners of the Category Prizes) have been announced.

Visitor numbers for this year have yet to be tallied, but from a mere 200,000 visitors in 2009, last year's event drew over 400,000 visitors from all 50 states and 47 countries. Clearly, ArtPrize has been and continues to be a wildly successful and popular art event that has put Grand Rapids on the cultural map.

Artist participation has fallen slightly from a high of 1,713 in 2010 to this year's 1,453. In a tacit admission that the event may be more of an unmixed blessing for the town than it is for the artists, additional prize money has been added to the two whopping $200,000 Grand Prizes in the form of 8 smaller $12,500 prizes in 2-dimensional, 3-dimensional, time-based, and installation categories (both voted by the public and juried)–plus a juried prize for best curated venue. Grants totaling $280,000 have also been awarded to artists, curators and venues for fabricating and installing site-specific artworks and exhibits.

Five entries from the Ann Arbor/Ypsi area were on view in Grand Rapids this year, and they are representative of the diverse backgrounds and professional experience of ArtPrize artists overall: 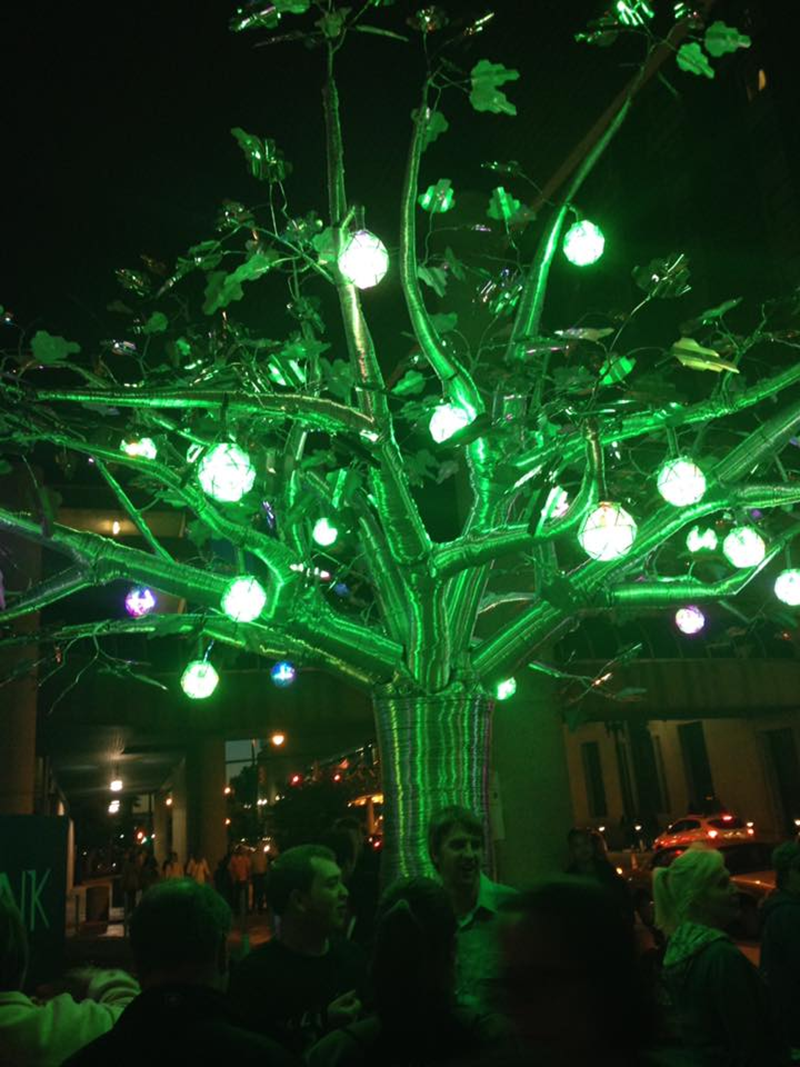 One Ann Arbor/Ypsi entry, Invasive Species by Shiny Seed, managed to make it into the prestigious final round of 20 for the $200,000 Public Choice Award, although the top prize ultimately went to Wounded Warrior Dogs by James Mellick of Milford Center, Ohio. (The Juried Grand Prize went to The Bureau of Personal Belonging by Stacey Kirby of Durham, North Carolina.)

Invasive Species, a giant aluminum-wrapped and LED-festooned tree, is a collaborative effort by software/electrical engineer and sculptor Gene Foulk and Casey Dixon, artist and shop manager of Maker Works in Ann Arbor.  Invasive Species displays in abundance the qualities that can seize and hold the attention of the ArtPrize public and win their votes. It is figurative, centrally located, monumental in scale.  It also demonstrates the technical mastery of the artists, is meticulously crafted and expresses commonly shared values in its environmental theme. 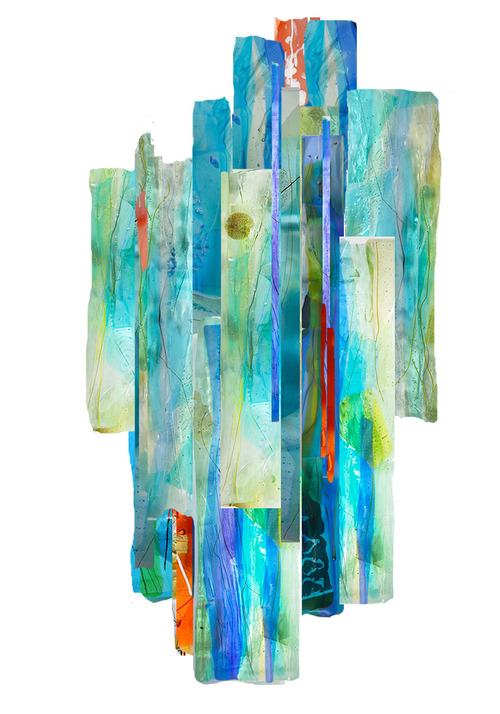 ArtPrize 8 is Ann Arbor glass artist Janet Kelman’s first experience with the event. She has been creating works of art in glass since she fell in love with the material while studying chemistry in college. Her wall-hung relief/assemblage Oracle was installed on the second floor of the Gerald R. Ford Presidential Museum.

Kelman is drawn to water and images of water, and her latest work is an exploration of that fascination. Oracle is one of a series on this theme. It is deceptively simple in form but complex in execution. Composed of 16 separate layers of fused glass displayed at varying distances from the wall, the panels overlap and interrelate in color and shape. She describes her process, saying, "I create small glass pieces using threads of glass, enameled images, crushed glass, whatever else I can dream up, and assemble them in layers on a kiln shelf.  The finished fused glass always provides surprises, its constant allure."

Other work by Janet Kelman can be seen at WSG Gallery in Ann Arbor and Vale Craft Gallery in Chicago.

How to Draw the Human Eye by Megan Foldenauer.

Megan Foldenauer, whose time-based drawing and video How to Draw the Human Eye was on view at the Women's City Club, has lived and worked as an artist in Ypsilanti for 11 years. Her virtuosic pencil drawings of a wide variety of single human eyes arranged in a grid around a small video screen make excellent use of her background in anatomy and medical illustration. She claims she has always known how to draw: "I'm one of those 'all of the sudden I could draw' types. A gift, a calling, a life’s purpose, whatever you wanna call it – I didn’t have to work-work-work to be able to draw… it’s just something I can always remember doing." 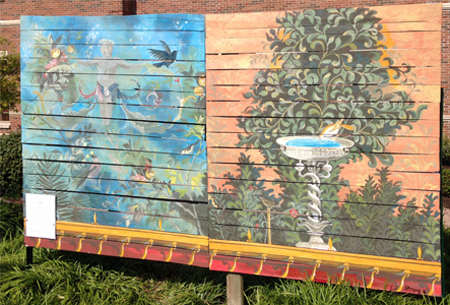 A freestanding diptych by J. Daniel Strong was installed in a corner park a bit off the beaten path during ArtPrize. Strong is an Ann Arbor muralist who usually works on commission. The imagery on the front of Pallet is based on Roman paintings in Pompeii, with an array of quotes on the back that refer to humans and their interaction with nature over time. 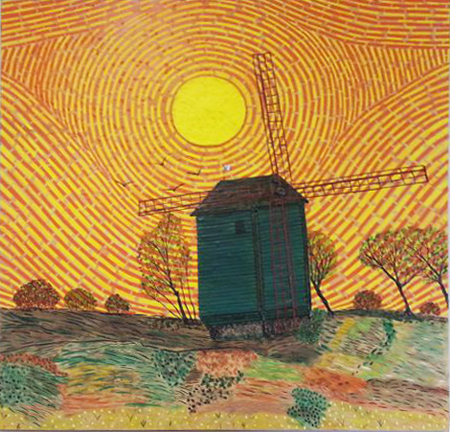 I was pleased, and a little surprised, to see an artwork by Peter Warburton prominently displayed on the main floor of the Gerald R. Ford Presidential Museum.  I have seen Warburton's "paintings" from duct tape from time to time in coffee shops around Ann Arbor and Dexter, and have always been charmed by them. A self-taught artist, he has often taken works by Vincent Van Gogh as inspiration for his pictures because he feels a spiritual kinship with the troubled French Impressionist. In Sunset, Monmartre, 1896, he evokes the jumpy stippling of Van Gogh's brushwork; the sun shining over the windmill in the picture mimics a giant eye glaring at the landscape below.

The participating artists’ opinions of ArtPrize experience are, finally, as varied as the individuals themselves, from an enthusiastic “pretty awesome” to a less positive “I’ll never do that again” and everything in between. The key to evaluation of the ArtPrize experience though, is in the management of expectations. With only 11 prizes to divide among over 14,00 entries, artists must weigh whether exposure of their work, engagement with the public and a line in their resume justifies the considerable expenditure of money and time required. What isn’t in doubt is the genuinely positive--and even transformative--effect ArtPrize has had over the last eight years for the city of Grand Rapids and its citizens.

ArtPrize is an annual event in Grand Rapids, MI. For more information about ArtPrize go to artprize.org.