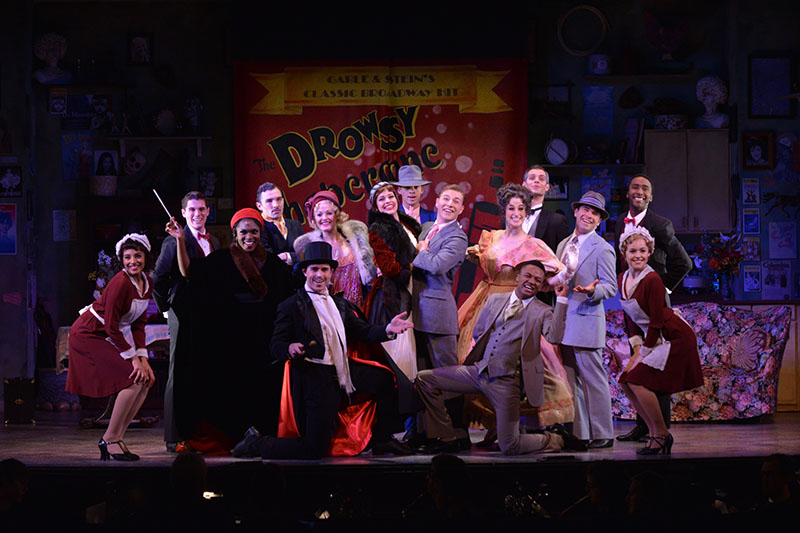 A man with gray flecked hair, dressed in an old cardigan sweater sits in the dark complaining about modern theater and modern life in general. Things just ain’t what they used to be.

This is the beginning of magic, a near perfect production of The Drowsy Chaperone by the University of Michigan Department of Musical Theatre.

The man in the chair is sharing his weary view of the world and his obsession with a recording of a 1928 musical, from back in the day when musicals were fun. That musical, The Drowsy Chaperone, is a fizzy, frivolous fluff with the usual stock characters, thin and predictable plot, jazz inspired score and a fine example to the man in the chair of all the sweetness that has been lost in the world.

As the man tells us the story of the musical, the musical comes vividly to life in his nostalgia filled apartment. He swoons over every nuance of story and every piece of stage business and recounts the back stories for all the original stars, rising diva and fading diva, vaudeville comedy team and notorious womanizer, secretly gay leading man and charming old pros who have seen better days.

Director Mark Madama has assembled a terrific cast, each perfectly fit to the character they play. The style is arch, satirical but never so overplayed that it loses touch with what might have been a smashing opening night on Broadway those many years ago. The Drowsy Chaperone, with music and lyrics by Lisa Lambert and Greg Morrison and book by Bob Martin and Don McKellar, uses that happy style of musical theater to poke fun at nostalgia but also offer an ode to entertainment for entertainment’s sake.

The 1928 play concerns the romance of a Broadway star and a businessman, their impending marriage, the star’s woozy “chaperone,” a couple of bakers (who are really gangsters), a producer afraid of losing his star, a chorus girl angling to take her place, a Latin lover, a dotty lady and her droll “underling.” Sound familiar? And every piece goes together like clockwork. Every performance is choice.

Hannah Lynne Miller is the effervescent Janet Van de Graaff, the star about to throw away the spotlight for marriage. Miller is a riot as she poses for the press, sputters between devotion for her new beau and anxiety over losing her celebrity fix. She’s a fine singer who delivers sincerity even on a song that the man in the chair warns has awful lyrics.

Equally compelling is Nkeki Obi-Melekwe as the title character, the chaperone. She is a deft comedian, with arched eyes and pained sophistication. Her singing shows great range and precise, sensitive phrasing needed to deliver all the humor and sly emotion of her “anthem” “As We Stumble Along.”

Charlie Patterson is hilarious as the egotistic, posturing Adolpho, self-styled Latin lover. He has a love song to himself “I Am Adolpho” that he delivers with just the right amount of clueless self-congratulation.

Kyle McClellan as the potential groom matches the self-loving ego of his bride to be with comic charm. But he also sings and dances superbly. McClellen and Christopher Campbell as his diligent best man perform a great tap dance routine to the song “Cold Feet.”

The tap dance is interrupted by the underling, a butler in the tradition of P.G. Wodehouse’s Jeeves, always one step ahead of the upper crusty. Aidan Ziegler-Hansen delivers his lines with precision timing and a bit of droll disdain. He also goes a mean little tap dance.

His usual partner is the ever-confused Mrs. Tottendale, played by Isbel Stein. Stein is amusingly spacey, dressed in a long-dated dress to match her bafflement. She and Ziegler-Hansen sing a goofy love song, “Love is Always Lovely in the End.”

Riley McFarland is the producer, a man in a constant state of despair as he is hounded by gangsters and a pushy chorine. He brings a bit of authority to a funny character. Jo Ellen Pellman plays Kitty, the “dumb blonde” stereotype, to a tee. Her voice cracks, her eyes roll, her body shimmies. It all works.

What also works is the clockwork timing of Joseph Sammour and Simon Longnight as the comic gangsters in both their comic wordplay (a stereotype of ’20s musicals) and their dizzy dance number “Toledo Surprise.”

Another post Lindbergh element to musicals of those days was an aviator, but here an aviatrix with a booming singing voice, well played by Cydney Clark.

The heart and soul of this production is Alexander Sherwin, that man in the chair. His voice may remind you of David Sedaris, a hint of sadness behind every laugh line. Sherwin takes us deep into this man who loves the theater and hates what has happened to it. He knows the story of every performer, the way kids know the story behind sports figures and rappers. He harbors ill will to the modern world and slowly, surely we find out why. Sherwin’s performance is impeccable and gives this bit of fluff its deeper meaning.

The musical direction and the jazz style orchestra under Jason DeBord is outstanding, especially in its ability to give punctuation to the humor on stage. Mara Newbery Greer’s choreography is terrific whether handing the lively tap numbers, a tricky skate routine or the ensemble in full motion.

Caleb Levengood’s set is a masterful tribute to nostalgia, a green colored parlor covered with star photos, posters and playbills and the comfy furniture of another era. The set is also well suited to the quick scene changes of the musical within the play. But there are some subtle touches that get at the heart of the man in the chair, like a row of pill bottles on his side table.

This is a big show, full of humor within the musical and at the expense of the musical. This is an ode to the giddy, goofy '20s musical in all its glory and the UM production grabs all that humor and goes deep into back story for a little more. Bravo!

The Drowsy Chaperone continues at the Lydia Mendelssohn Theatre Friday through Sunday Oct. 14-16 and Thursday-Sunday Oct. 20-23. For tickets call the box office at (734)764-2538 or go online to http://tickets.music.umich.edu.