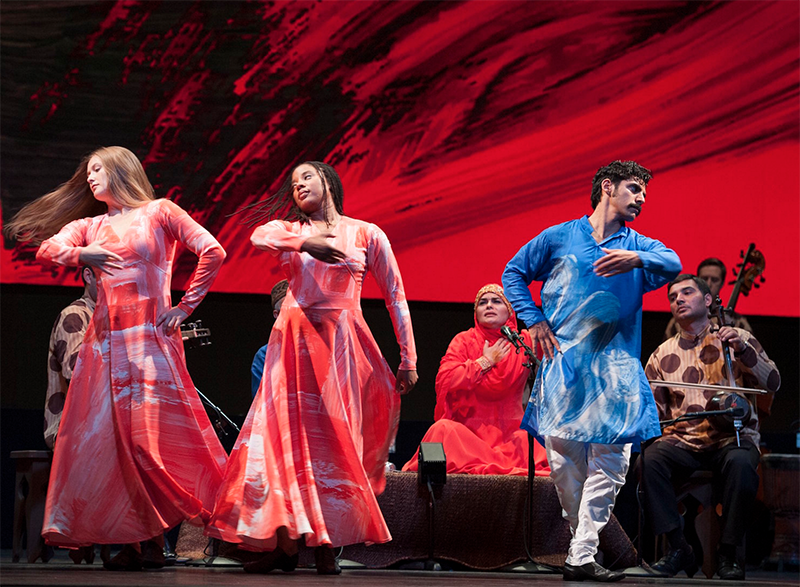 UMS presents Layla and Majnun at the Power Center. / Photo by Susana Miller.

Choreographer Mark Morris notes that the ancient story of Layla and Majnun presented by UMS at the Power Center this weekend -- a Persian romance retold across the Mid-East since the 12th-century -- is one of profound, abundant, eternal love, and that a full staging of it has the potential to make it more accessible to a larger audience. Given the western penchant for a good tragic love story -- think Romeo and Juliet -- this tale of young lovers so desperate for each other that the man is driven mad certainly has potential cultural traction here. With his production of Layla and Majnun, Morris succeeds in bringing this story to life for audiences who may be unfamiliar with it and in so doing adds his distinct mark to a tale that has already had many hands on it.

Consider all the permutations of this ancient tale that are present in Morris’s production. Its musical source is a 1908 Azerbaijani opera, Leyli and Majnun, that in turn is based on a 16th-century poetic setting of the ancient story. The opera was the first instance of western symphonic music combined with mugham¸ a traditional Azerbaijani improvisational form performed by vocalists accompanied by frame drums, lute, and spike fiddle. Although the opera is beloved in Azerbaijan, it has been reconceived for this production. Renowned mugham singer Alim Quasimov, in collaboration with the Silk Road Ensemble, has compressed the three-and-a-half-hour opera into a more easily digestible seventy minutes, distilled around Majnun’s solos and his duets with Layla. Furthermore, elements that were kept separate in the original opera - mugham and western instruments, improvisation and written parts - are here integrated. To this story many times retold and this music many times re-imagined, Morris adds his dancing.

The musicians - Qasimov and his daughter, Fargana Qasimova, with the Silk Road Ensemble - fill the center of the stage while the dancers weave around and between them. The story unfolds in five acts: Love and Separation, The Parents’ Disapproval, Sorrow and Despair, Layla’s Unwanted Wedding, and The Lover’s Demise.

The tone of the verses, present as a libretto in the printed program, is sustained, seldom varying even as the story progresses from act to act. The lovers continuously profess their agonized passion, but Morris’s choreography refracts this one-noted desperation. In Act I, Layla and Majnun glow with smiles. They rebound from broad and deep pliés and extend glorious legs, testing their connection with one another from different angles and at different distances across the stage. They play a little game, encircling each other with their arms. This merry interaction directly contrasts the verses of Act I - “My heart is heavy because I am alone…I feel like a nightingale that cries in pain…” In so doing, it creates a satisfying starting place; theatrically, the story has somewhere to go.

The dancing also adds breadth to the characters. The full cast of twelve is almost always on stage, but different dancers take on the roles of Layla and Majnun in each of the first four acts. The different aspects of these characters that emerge over time and through circumstance are made evident by the different humans who embody them. Stacy Martorana’s Layla of Act I is exuberant and expansive, whereas Nicole Sabella’s Act II Layla becomes more restrained.
With the work of story-telling done by the printed libretto (and largely superfluous projected supertitles), Morris’s choreography only occasionally employs mime-like “literal” movement: Layla’s unwanted husband shakes his fist at Majnun, or Layla reaches longingly toward her lover. More often, the dancing relies on a more visceral meaning-making: as Majnun goes mad, he pitches backward with knees bent deep and arms spread wide. When her parents disapprove, Layla curtsies low and slow, her fingers and wrists tracing sinuous curlicues, but then finds herself standing high on a step, pushing the air away from her. As Layla’s Unwanted Wedding unfolds, the stage is flanked by rows of unison dancers whose pert and precise footwork and shifting facings manage to evoke both a folk dance and the inevitability of tradition and ceremony.

Sometimes, as with that wedding scene, the ensemble of dancers is a community. They herd the lovers away from each other, or watch and seem to whisper about them. Sometimes they play the role of a Greek chorus, commenting on or translating the actions of the central characters. In Sorrow and Despair, they stand linked together, heads whipping and rolling from side to side, on and on, creating a frenzy of obsession. Sometimes they are all Laylas and all Majnuns, reflecting the actions of the “real” Layla and Majnun.

The resolution of Layla and Majnun’s desperate affair is, of course, death. In the final act, all four Laylas and all four Majnuns are present, but their respective demises seem asymmetric. My impression is of all the Laylas descending together to sit with bowed heads, but each Majnun has a brief solo before surrendering to the floor. (After all, the story tells that it’s Majnun who officially goes crazy; Layla just expires.) A clarinet solo draws all the dancers up to their feet, and each pair of Layla and Majnun meets briefly before exiting. I want to think they have been united in death, or that their earthly love has been subsumed in a divine one, but the final image is of a pair of female dancers returning to extinguish two of the lanterns that have been burning throughout the performance.

If there’s a shortcoming in the production, it lies with an uneven distribution of restraint. In comparison to the wildness, the near-hysteria, of the singers’ improvised solos, the choreography sometimes seems safe, tame, comparatively unimpassioned. Perhaps it’s a function of spatial confinement; the Silk Road musicians and mugham singers take up a good chunk of the stage and the dancers have only limited paths available. Or maybe it’s the nature of the rehearsed versus the spontaneous; when each of the Majnuns performed his last, brief solo, I glimpsed an unleashing that paralleled that of the singers’ and I suspect it’s because those solos are largely improvisatory. Mine is a small complaint, though; this Layla and Majnun is a worthy installment in the story’s evolving history as a performance work. Its reconceived music and eloquent dancing serve the famous story and render it quite legible to a non-Azerbaijani audience.