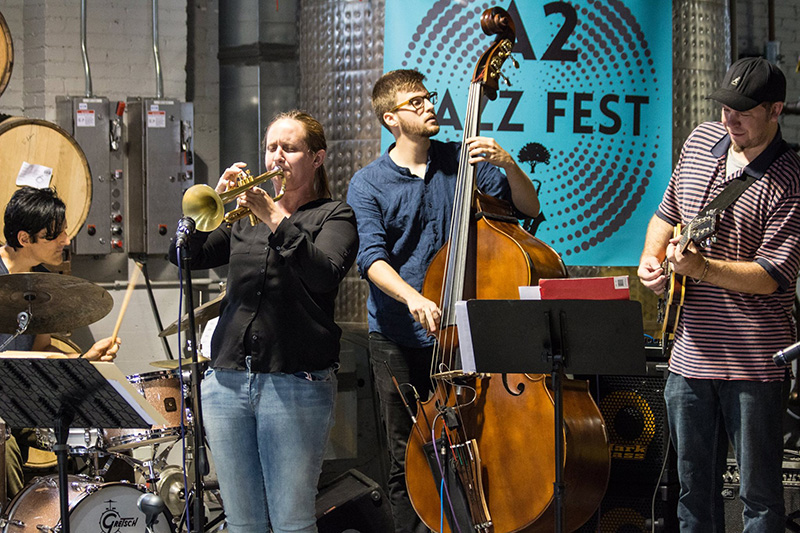 Ingrid Racine, with Ben Rolston and Chuck Newsome, at the Ann Arbor Distilling Company during the recent 2016 A2 Jazz Festival.

Our local contingent of modern jazz improvisers is as substantial as those coming in from out of town. We’re fortunate to have them, considering the paucity of performance spaces for them to ply their craft.

One performer who seems to take it all in stride is trumpeter Ingrid Racine. Juggling motherhood in tandem with her mate, club DJ Alvin Hill, creating and exploring performance spaces, teaching, performing some administrative duties, and recently making her debut recording would be a bit overwhelming for anyone. Add to that the tricky parameters of playing a brass instrument and one has to admire how from day to day she fits all this in yet plays so beautifully, straddling the not so fine line between jazz tradition and her personal brand of modernity that appeals to a mostly younger -- but some older, universal -- jazz demographic.

She has listened to and incorporates many aspects of the 100 years of jazz; she embraces everything from early trad and swing to mainstream jazz, and be bop, fusion, folk forms, and even the hip hop of her generation.

It's rare for a jazz musician to be born, raised, and continuing to live in Ann Arbor. Racine graduated from the jazz program at Community High School, guided by Mike Grace in 2000. She obtained her BFA in Jazz Studies at the University of Michigan where she was instructed by the great Detroit saxophonist Donald Walden, and Detroit Symphony Orchestra and jazz trumpeter Bill Lucas.

By graduation, Racine was entrenched as a member of Phil Ogilvie’s Rhythm Kings, Mady Kouyate’s Heat of Africa, and the Detroit-based all female jazz group Straight Ahead. She toured and recorded with the Afro Beat large ensemble NOMO from 2003-2009, recording for the West Coast based Ubiquity label. In 2007, she returned to University of Michigan to study with vaunted jazz piano star Geri Allen while completing her Masters Degree in Improvisation. She also curated for three years the summer outdoor series of shows on the patio of the Gandy Dancer.

Ingrid Racine was working professionally during her days as a student. Her playing has fit in with trad jazz groups like P.O.R.K - Phil Oglivy’s Rhythm Kings led by James Dapogny, the Paul Keller Orchestra and Women In Jazz ensembles. While far from petite, Racine handles her brass trumpet with a savvy that has recalled veterans twice her age such as Freddie Hubbard, Jack Walrath or Valery Ponamarev, while also adding some of the ethereal qualities of the late Kenny Wheeler.

As a composer, Racine is also asserting herself, as evidenced by the release of her independent Kickstarter funded debut CD Concentric Circles. She’s a little on the funk side of jazz, can swing as hard as she needs to, and sings on occasion delightfully. Her recent hit performance at the A2 Jazz Fest with her regular quartet, numerous club dates, and her regular gig every Sunday for brunch at the Gandy Dancer has shown her to be a reliable player that delivers consistently. In a world dominated by male instrumentalists, Racine is proving she is a leader among women or any gender in jazz, a contingent that is finally ascending with rapid and overdue recognition.

The fluid motion of her horn lines belies the fact that hard metal pressing against teeth and lip skin embouchure is no easy task, and can eventually be damaging, yet she takes care of business on all of these levels to emerge as perhaps the premier female jazz player in this era and this region.

She recalls her early days listening to funk and ska music. “In ninth grade it was the British second wave - The Specials and English Beat. Then I went backwards to the Jamaican stuff. There were strong Community High school bands back then. I played in an all-female punk band Vomica, named from the homeopathic remedy, and The Brewts, whose drummer was Barrett Miller, Ben Miller from Destroy All Monsters’ son.”

The unlikely bridge between the harder edged music and jazz was Chet Baker. “My brother was in the CHS Jazz band and the rockabilly group Lucky Haskins. Justin Walter and Ben Jansson were in his band - great jazz players. It started for me with Chet Baker on records, something that was accessible to me, and someone singing, and the playing. I heard a Thelonious Monk compilation record which I listened to death. Then I was in Sandy Machonochie’s jazz band at Tappan Middle School and she made me take improvised solos against my better judgment."

The juxtaposition of working simultaneously with James Dapogny a.k.a. Phil Oglivy, and NOMO as a bridge between Jelly Roll Morton and Duke Ellington to Fela Kuti might seem disconnected, but Ingrid Racine considers it a blessing. “For NOMO, it was cool kids playing at dance parties, but when I was hungry for gigs I sat in and got my butt kicked for the first two years with P.O.R.K."

Her career path has led her to the long overdue solo recording Concentric Circles, the culmination and an offshoot of her 12 year, regular Sunday brunch gig at the Gandy Dancer, where she has honed her playing and singing. “I feel like writing-wise I go through phases. I’ll book a gig and challenge myself to write all new tunes. So this batch of music with this band goes back to 2012 at The Raven’s Club. I knew the vibe I wanted to go with. So over the course of a few years we only played it a few times. Then there was music we did at the Elk’s Lodge. So the CD is an amalgamation of two writing periods."

“I’m not a big wailer, a high note player. My approach to the instrument is more forgiving. Just the way I hear things is more lyrical. I even didn’t want to think about it being a so-called jazz record, because I didn’t want that pressure of being virtuosic."

Ingrid Racine & Friends perform every Sunday for brunch at the Gandy Dancer, 401 Depot St., from approximately 10 am - 2 pm. For dining reservations, call 769-0592. Ingrid also performs every Sunday with the Heather Black Project at the Ravens Club, 207 S. Main St., from 8 pm - 11 pm.

Ingrid is also leading an ongoing Music Production workshop presented by All Arts Access at AADL on Tuesday, October 25, November 8 and 22, 2016 at the Downtown Library.