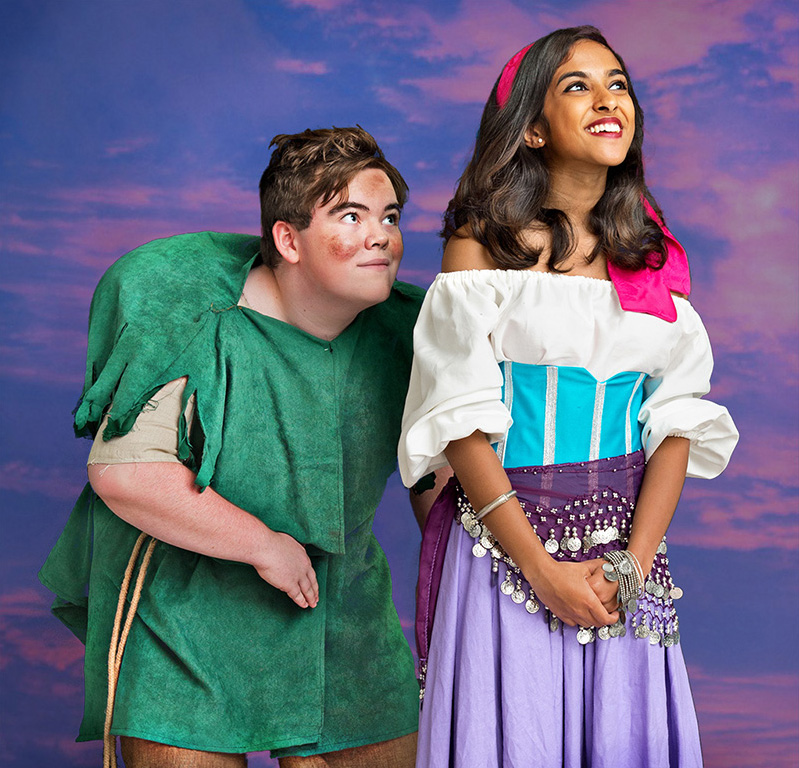 Henry Kiley is Quasimodo and Sanomi Croos-Dabrera is Esmerelda in PTG's The Hunchback of Notre Dame / Photo by Myra Klarman Photography.

Pioneer Theatre Guild's The Hunchback of Notre Dame is a special production: First, PTG is one of a handful of American schools piloting the musical before its rights are released to theater groups across the country. Second, they may well be the first to perform it, with a few other venues performing the musical during winter and spring 2017. So it's not only an Ann Arbor premiere, it's also a sort of world premiere as well.

In preparing for the show, PTG has been fortunate to have the technical assistance of University of Michigan Professor Peggy McCracken, whose expertise in France during the Middle Ages has helped the students and directing staff understand this period and place as well as the motivation of their characters. Then, to even top this unexpected source of expertise, the production group has had the opportunity to Skype with the show's musical composer, Alan Menken, for additional pointers.

The show's haunting, beautiful music -- featuring a full choir that helps narrate the plot and give a historical feel to the theater -- showcases the timeless and powerful story of Quasimodo and his love for the beautiful Esmeralda against the backdrop of the historic Notre Dame Cathedral. Set in 1482, a time of mystery and havoc, the story follows Archdeacon Claude Frollo’s dark past and how he came to raise the disfigured child Quasimodo who is prohibited from ever leaving the Notre Dame environs. Others among the bustling city of Paris below the church bells are the aforementioned Esmeralda; the war soldier Phoebus; and the unexpectedly heroic Clopin Trouillefou.