The list of Gorey's many pseudonyms open the exhibit. The Dracula set replica and the shadow of the Gorey Bat.

Edward Gorey: lover of cats, ballet, Victorian/Edwardian era aesthetics, fur coats, pen-and-ink drawings, the color black and bats. Becoming a fan of Gorey has come in/out of fashion many times over the years, but since his death in 2000 he has only grown in the public consciousness. If you don’t know Edward Gorey’s work you surely know of the legions of other artists who were inspired by his work. From Tim Burton to Lemony Snicket, and goth culture to steampunk Gorey’s influence is felt far and wide. And from Neil Gaiman to Emily the Strange, and Lenore all things, dark, atmospheric and vaguely historical likely started with a love of Edward Gorey. Gorey’s black and white aesthetic lends itself to tattoo work, and often seeing a Gorey inspired tattoo will be for some their first glimpse into his macabre and hypnotizing world view. Many people also discover Gorey from the many New Yorker covers he did, as well as the animated credits for PBS's Mystery!

Unsettled: The Work of Edward Gorey @ the Cranbrook Art Museum, in Bloomfield Hills, MI opened September 18, 2016 and will be on display through March 12, 2017. The show is a perfect primer for entering the pen-and-ink world of Gorey’s illustrations. Gorey was a prolific illustrator who started working in the 1950’s for Doubleday publishers in NYC as their in house illustrator. It was here he honed his craft and illustrated classics like Dracula by Bram Stoker, The War of the Worlds by H. G. Wells, and Old Possum's Book of Practical Cats by T. S. Eliot. Later, he became known for illustrating most of children’s author, John Bellairs’s books, starting in the 1970s and continuing in the 90s.

The exhibit is a collection on loan to the museum from a local collector and it serves as an excellent overview and entree to the work of Edward Gorey. Newbies and devoted fans will both enjoy the variety of work on display and the opportunity to ponder and look closely at his detailed drawings. The size of the works and his simple yet complex use of black pen and ink begs to be more closely inspected. 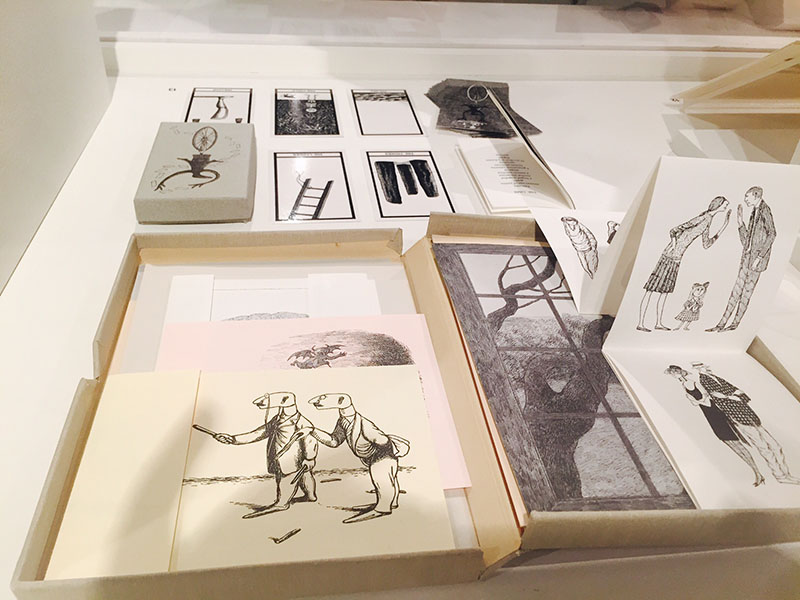 One of Gorey's special boxed sets and The Fantod Pack tarot deck in the rear.

The majority of what is on display are the wide variety of books that Gorey illustrated for others as well as his own works such as: The Curious Sofa, The Beastly Baby The Sopping Thursday, and his most well known book The Gashlycrumb Tinies. Knowing that most of his original illustrations were the size that they were published makes his meticulous detail even more impressive.

The original prints, posters and ephemera are also a thrill to see. From the large framed poster print of the 1977 Broadway revival production of Dracula that he designed the sets for to the 3D replica of the stage set, that allows you to do your own version of the play, it’s a wonderful sampling. A bean bag filled Gorey bat with red rhinestone eyes, The Fantod Pack - Gorey’s version of a Tarot card as well as a few rare stuffed cats and pigs were also on display. The impossibly miniature and rare books on display are a joy to see - smaller than 2 inches in diameter with full, detailed illustrations.

Gorey’s humor is dark, clever and at times make you feel uncomfortable, but you may also find yourself smirking with knowing glee at the black humor and the dangerous places he fearlessly takes his audience.

Erin Helmrich is a librarian at the Ann Arbor District Library and an avid collector of Edward Gorey's books and more. She has three tattoos of Gorey's work - all black of course.


Unsettled: The Work of Edward Gorey is on display through March 12, 2017. Museum admission is $10 for adults and the exhibit is included in this fee. More information about the exhibit and the museum can be found here.