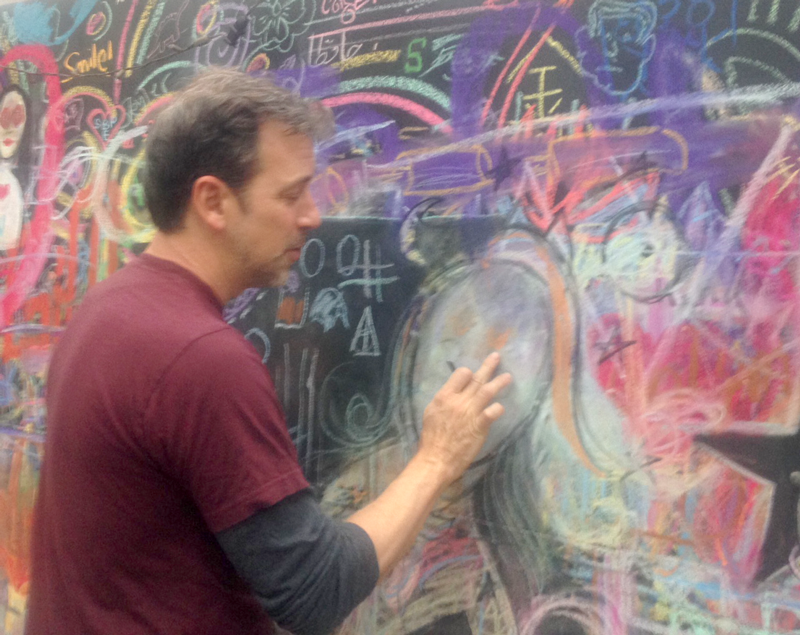 David Zinn's art is all over Ann Arbor, but you may not know it.

In addition to two PowerArt boxes recently installed at Main and William (PenPals) and at Liberty and First Ave (Selfie Monster) as part of the PowerArt Project, the Ann Arbor native is also responsible for the witty trompe l'oeil rendition of Singin' in the Rain which can be found on Fifth Avenue across from the Ann Arbor Public Library's downtown branch. And recently he was one of the artists represented at Ann Arbor Art Center's Pop-X Festival. 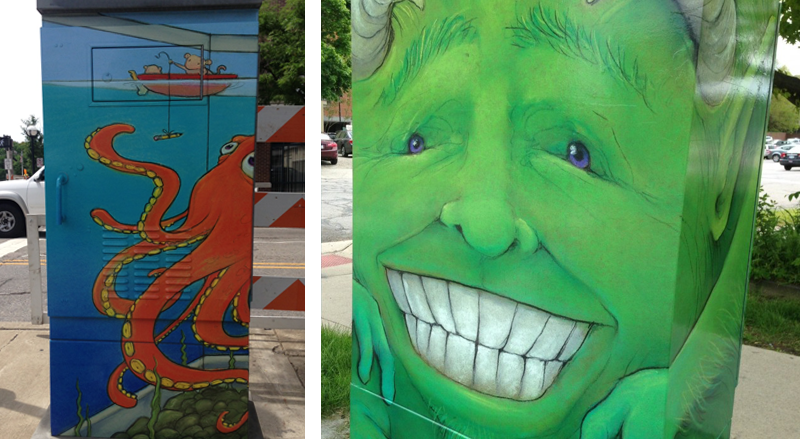 David Zinn is best known, though, as a master of comic ephemerality. He creates improvised temporary street art entirely from chalk, charcoal and found objects. His works feature fanciful creatures that pop into and out of our dimension, visitors from his wild imagination. He likes "walking around seeing places where art wants to be and putting it there."

Zinn's improbable career as a street artist began about 14 years ago as an escape from the tedium of his job as a graphic designer:

"The first day I did this, I had a really important job that I had to finish in two days, and I should have been sitting in front of my computer doing this very important job and doing all the very important things I was supposed to do. It was completely childish and irresponsible to go outside, but it was a beautiful day. The sun was out, it was 76 degrees and that does not happen here every day. And it made sitting in front of a computer seem kind of irrational."

Zinn's temporary artworks are relentlessly cheerful and entertaining. Sluggo, an amorphous blob with eyes on stalks and Philomena, a pig with wings, make frequent appearances in his temporary artworks along with a wide array of tiny monsters, valiant mice, elves and some creatures that are frankly, impossible to categorize. They bubble up out of his subconscious and dissipate just as quickly.

Zinn spends quite a bit of creative energy in subverting the status of his works as permanent art objects. He is not interested in showing his work in galleries, or in treating them as objects to venerate as high art. He values spontaneity and surprise above all.

"If it isn't going to be destroyed there's a lot I should be worrying about right now-- whether it’s good enough, whether it's serious enough. II feel bad for painters who paint conventionally on canvas, because when you finish a canvas, no matter whether you sell it, give it away or keep it in your attic, these are all things that you now have to do...but if you can't take it home, or somebody's going to eat it, or it's going to get rained on anyway, then you're free to just do what's going to make you happy now. And if you like it you can take a picture."

And that's exactly what David Zinn has done. He recently published a thoroughly entertaining book of his favorite temporary chalk artworks entitled Temporary Preserves. It includes not only pictures of his outdoor creations, but also photos of many of his smaller efforts made on the tables of restaurants in Ann Arbor during Michigan's cold winter months.

Take a walk and see the PowerArt! boxes up close and personal; a map of PowerArt! box locations is available to download. PowerArt is a partnership between the Ann Arbor Downtown Development Authority (AADDA) and the Ann Arbor Public Art Commission (AAPAC), The Arts Alliance is managing the selection and installation of artwork by local artists on power boxes throughout downtown Ann Arbor. You'll find more info about the project at the Arts Alliance website.