Review: Nora Chipaumire’s “Portrait of Myself as My Father” 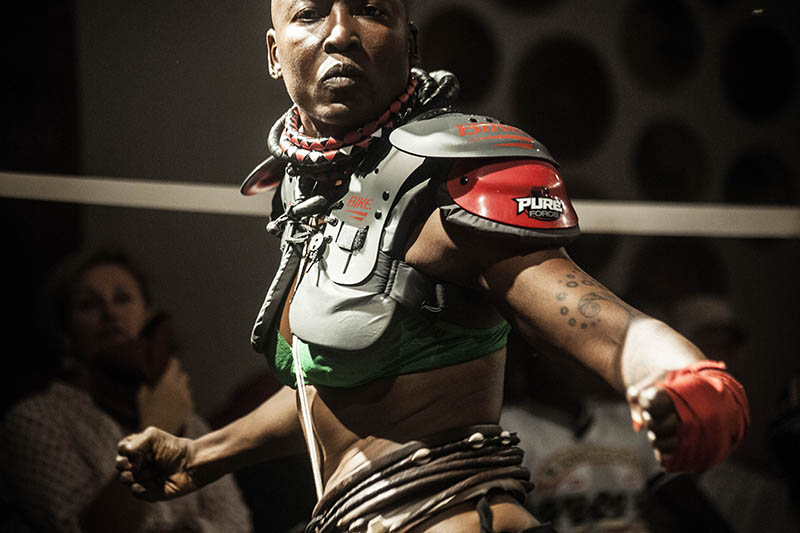 There’s a reason that Nora Chipaumire’s “Portrait of Myself as My Father” earned a spot in University Musical Society’s Renegade series, which highlights cutting edge artists (and works) that take risks.

And once audience members enter the performance space – a boxing ring, bordered by red, white, and blue ropes, and surrounded by bleachers on four sides – they immediately confront bright halogen lights, a loud, electronic soundscape, and Chipaumire herself, talking into a boxing microphone that dangles from the building’s rafters.

If you think this doesn’t give you the chance to feel comfortable and settled, you’re right. You won’t. And your heightened alertness will likely be sustained throughout the hour-plus show.

For “Portrait” is all about overwhelming your senses (Philip White’s music ranges from distorted electronica and white noise to pulsing hiphop and drumming, and the room is shrouded in complete darkness, save for the portable halogen worklights, which sometimes shine directly in your line of vision); subverting conventions (like any kind of linear narrative); and collapsing areas of difference, whether it’s time – combining ritualistic African dances with ultra-modern, avant garde movements – or gender. Indeed, Chipaumire, a woman, acts as our guide to black manhood and masculinity while wearing football shoulder pads, a sheer black bra, and low-slung black pants, with a mostly-shaved head.

Tall, lanky Watt acts as more of a one-man stage crew, audience wrangler, and circus ringleader, dressed in a black tailcoat and red track pants, but he plays a larger role within the show as it progresses. During one segment, he wowed the crowd by repeatedly leaping over the boxing rings ropes and onto the floor.

Chipaumire deconstructs black African manhood by breaking it down into gestures, which is to say, specific ways of moving through the world. She states early on that “This is a manifesto about the black African,” and in her artist’s statement in the program, she talks about how personal the piece is. For the piece is inspired by Chipaumire’s experience: she last saw her father when she was five, and he died in 1980. She has since tried to learn more about him, and fill in some of the blanks, but in the end, she can never know him, and she imagines him in a boxing ring, doing battle not only with the forces of the larger world, but within himself.

This leads to an arresting final moment in the show, wherein Chipaumire is seen in the darkness carrying Ndiaye on her back, and Watt asks, “What is this about?” Chipaumire answers that it is about her father, whose carcass she carries with her. It’s a powerful image, and it achieves a fierce intimacy. But I must confess that before this scene, I struggled mightily to fit the show’s pieces together in any kind of cohesive, emotionally impactful way. I’d committed so much energy trying to unlock the show’s mysteries that it ultimately eluded me.

Even so, there are clearly some intriguing, complex ideas driving “Portrait.” Even as Watt repeatedly yells “Champion!” and leads the crowd in applauding Ndiaye, as he goes through the paces of Chipaumire’s sharp demands, you can’t escape the reminder of how often we watch black male bodies perform athletic feats for our pleasure and public consumption.

So some of these thought-provoking, disquieting moments definitely land, but mostly, this “Portrait” inevitably seems blurred.

Portrait of My Father continues Saturday, November 19 at 8:00 pm and Sunday, November 20 at 2:00 pm at the Downtown Boxing Gym in Detroit, 6445 E. Vernor Hwy. Tickets are available here or through the ticket office by calling 734-764-2538. For more information, visit http://ums.org/performance/portrait-of-myself-as-my-father/.