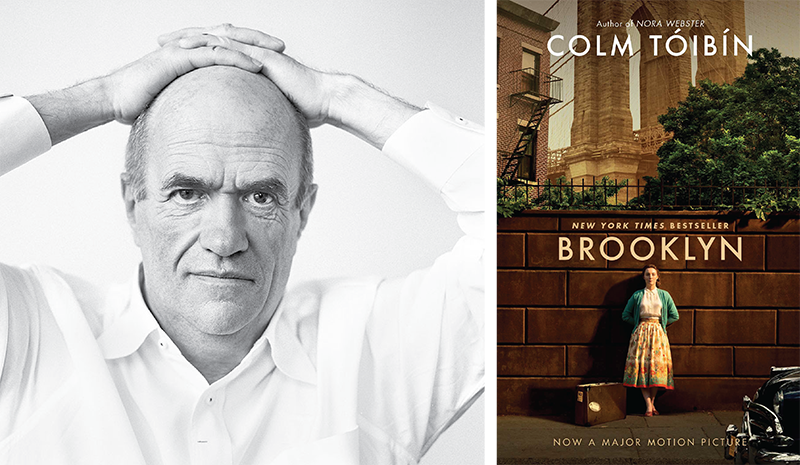 Keep Colm and read on.

But that seems not quite accurate, since many attendees who didn’t arrive in time to grab one of the venue’s 185 seats instead settled themselves on the floor of both side aisles, as well as the back wall.

Yes, the place was packed, but those who carved out a space for themselves got to hear Tóibín read from his novels Brooklyn and Nora Webster while also offering additional commentary and information.

While reading sections from Brooklyn – the basis for a film that earned three major Oscar nominations (including best picture) in 2016 – Tóibín noted, “One of the interesting things is that, the earliest recordings we have of Irish traditional music mainly come from America. The best players, best fiddlers, best singers, best accordion players all came from the West of Ireland, which of course is the poorest part of the country. There were no recording studios, so they went to New York or Chicago, and people rented them recording studios by the hour.”

Many of these Irish musicians would work as manual laborers, too, so they often had a foot in two different worlds. Tóibín cited Joe Heaney specifically, calling him the greatest singer of his generation in Ireland.

“There’s a photo of him in a pub in Dublin, where tradition music is played,” said Tóibín. “There were these Americans from New York who were visiting Dublin and saw the photograph on the wall of this pub, and they said, ‘That’s our doorman, Joe!’ Yeah, that’s our singer, Joe.”

Regarding Nora Webster, Tóibín talked about how he’d abandoned it to work on Brooklyn, and why he struggled with it so.

“Part of the problem was, so much of the book Nora Webster comes from memory, and that memory … has no shape until you shape it,” said Tóibín. “And therefore, [I was always trying to think, ‘What’s this thing or that thing that happened? Would it be interesting in a book, or just interesting to me, for reasons of my own? What should I leave out? What should I put in? What scene will work dramatically, and what won’t? It took much longer than writing a novel … where you imagine somebody else, some other life, some set of rules and specific experiences that I hadn’t witnessed.”

One other problem was that the atmosphere of the novel felt more like the 50s than the 60s, so he finally stumbled upon a subtle but time-specific way to root Nora Webster in its appropriate era.

“Some year around this time, I think ’67 or ’68 or ’69, hair dye arrived in town,” said Tóibín. “And you’d call to a friend’s house, and his mother would come to the door, and it was like autumn had come to the door. Her hair would have gone copper color. … And every woman in the town, to a one, fell to this. it was an amazing episode, really.”