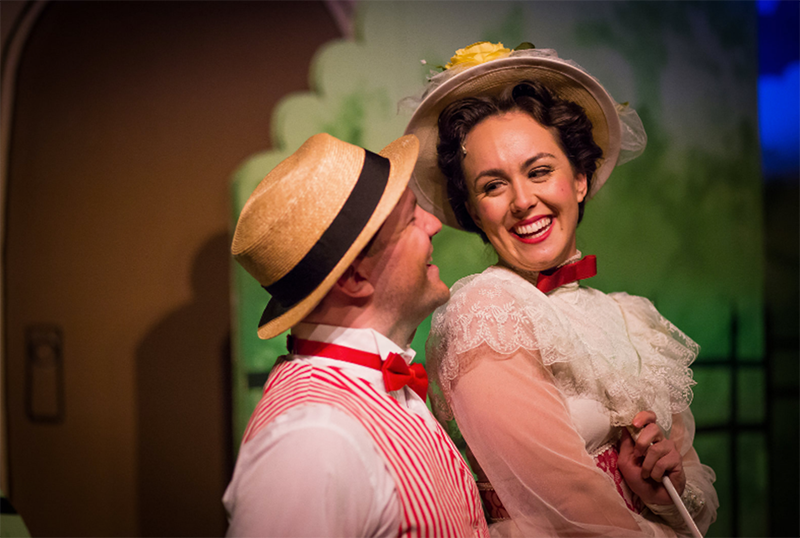 One word sums up the Encore Musical Theatre’s production of Mary Poppins.

You know the word, so sing out.

Encore has chosen the practically perfect musical for the holiday season with just the right mix of song, dance, and magic (and, of course, a spoonful of sugar).

The musical is an adaptation of the beloved 1964 Walt Disney movie based on books by P.L. Travers. The musical’s book by Julian Fellowes (of Downton Abbey fame) follows the basic story from the film but puts a bit more emphasis on the social context of the period, Britain in 1910. A few new songs by George Stiles and Anthony Drewe have been added but pale next to the luminous score of Richard M. and Robert B. Sherman, which are still the songs you’ll leave humming.

The story is simple but has some deeper lessons to convey. The Banks family seems the essence of middle class propriety. Father is an overworked and fusty banker. Mother is a one-time actress who is feeling a bit confined by the tedium of being “the lady of house” with little to do. Their children are getting out of hand and driving off nanny after nanny until Mary Poppins arrives in the knick of time.

Olivia Hernandez seems to have been born to play Mary Poppins. She has the erect back, the mobile face that moves swiftly from stern to amused, and a voice that rings clear and beautiful. She understands that Mary Poppins is always in control. She’s sweet but never too sweet, demanding but never too demanding.

A great Mary Poppins needs the support of an outstanding Bert, the jack of all trades who tells her story. Sebastian Gerstner is a solid, sympathetic, quietly lovelorn Bert. He speaks and sings with a working class London accent and charms the children and the audience in every scene. His dancing is on fine display in the "Step In Time" tap dance number on the chimney roofs of London.

Encore is using three sets of children in the roles of Jane and Michael Banks. On Nov. 26, they were played by real-life brother and sister Eva Reed and John Reed. They handled the long and difficult roles superbly with the right combination of spunk and awe. They also perform the songs and difficult dances excellently. The other teams are Dana Steiner and Connor Casey and Olivia Goosman and Emmanuel Morgan.

In Fellowes' adaptation, a greater emphasis is placed on the parents, George and Winifred Banks. Here they are played with depth and warmth by Daniel A. Helmer and Ally Kaufman. Helmer handles George’s transformation from stiff, pompous master of the house to kindly father with subtle shifts in pose and look. He has a fine voice on "A Man Has Dreams." Kaufman gives an equally delicate performance in the tough role of a proto-feminist in the era of suffragettes. Her musical moment is a softly reflective "Being Mrs. Banks."

Walt Disney famously said that his favorite song was "Feed the Birds," a lovely and sad refrain that alludes to a darker world beyond the Banks’ middle-class confines. Amy Dolan-Malany gives beautiful voice to this song as a beggar woman selling seeds on the street with a wan smile and tired gesture. But, Dolan-Malany does double-duty as the Holy Terror, Miss Andrews, George’s brutal Nanny. Dolan-Malany and Hernandez seem to be having fun in a pitched battle of sopranos on fire.

Director Thalia V. Schramm has had to work within the tight confines of the Encore stage, so some compromises have been made. But they have also encouraged some clever solutions to make it work that have a magic of their own. The set design by Kristin Gribben uses moveable sets that fold in and out to suggest everything from a cozy Edwardian home to a sunny park to the rooftops of London. The sets are also drawn in a way that, rightly, suggests the illustrations in a children’s book. The lighting design by Tyler Chinn is another key factor in giving the production a suggestion of alternate dread and delight.

Schramm, musical director Tyler Driskill, and choreographer Rachel Constantino find ways to make the small stage area play big. The small combo gives good musical support on the nicely varied score. The dance numbers from the tap routine to the lighter, sunny dances in the park are all stylishly done.

The familiar songs "Practically Perfect," "Chim Chime Cher-ee," "A Spoonful of Sugar," "Fly A Kite" and "Supercalifragilisticexpialidocious" are performed to perfection, and the other support roles and the large ensemble do a fine job of recreating another time and place.

This is a well-chosen musical for this time of year. Fans of the movie will find a charming low-key alternate take on the story with the added benefit of being wrapped in the adventure as only live theater can do. That’s the kind of special magic that would delight Mary Poppins.