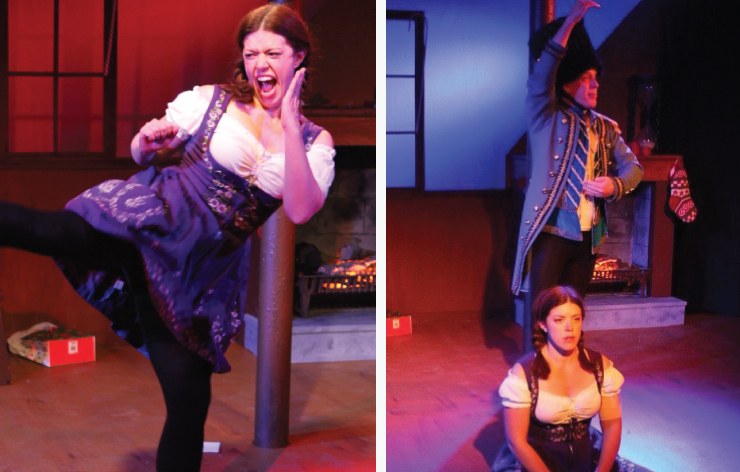 One of my favorite moments in Friday’s preview performance of Theatre Nova’s new Sugar Plum Panto was unscripted.

Actress Sarah Briggs asked the crowd what was on their Christmas lists this year. When a man jokingly answered, “A girlfriend,” Briggs cocked her head, pursed her lips, made a small “go get ’em” gesture, and said in a low, sympathetic voice, “Hang in there, Tiger.”

Pantos, of course, are a longstanding British holiday tradition, but they’ve also recently taken root at Theatre Nova, beginning with last year’s An Almost British Christmas. Pantos take a familiar children’s story and give it several silly twists and updates, integrating physical comedy and childish humor with more sophisticated, cheeky, and timely jokes for adults, thus drawing families all together for a night at the theater. Panto audience members are encouraged to boo and hiss when the villains appear, and candy is thrown to the kids in the crowd a few times, making for a loose, chaotic-but-fun atmosphere.

Last year’s inaugural Theatre Nova panto riffed on the story of Rudolph the Red-Nosed Reindeer, while Sugar Plum Panto offers a goofy retelling of The Nutcracker as well as that story’s original source material, E.T.A. Hoffmann’s Nussknacker und Mausekonig (the pronunciation of which inspires a somewhat labored bit of wordplay).

But unlike any Nutcracker you’ve ever seen, this one kicks off with Frankenstein’s monster (Dan Morrison) as a facilitator, and features a fairy (Sonja Marquis) that’s a bizarre hybrid of Heart rocker Ann Wilson and celebrity chef Paula Deen.

The show’s double entendre “nut” jokes are poured on rather thickly near the show’s start — to the point where you look over at your kids and wonder if the repetition is cluing them in to this bit of adult naughtiness. But in the end, the humor of panto shows are almost always working on two levels. Yes, there are things that make adults laugh, and things that make kids laugh, with a good deal of overlap therein; but there’s also just the communal atmosphere of silliness and goodwill that tends to calm your (dare I say overworked?) parenting reflexes.

You may remember that The Nutcracker tells the tale of Clara’s fanciful Christmas Eve dream about her new, beloved Nutcracker coming to life and fighting the Mouse King, and then leading Clara into his magical world; but Hoffman’s original narrative also includes a story-within-a-story about Princess Pirlipat, who is cursed with ugliness by the angry Mouse Queen. Pirlipat will remain disfigured until she finds a man who’s never been shaved or worn boots to crack a special nut (called the Krakatuk), close his eyes, and give it to her to eat, while he keeps his eyes closed and walks seven steps backward without tripping.

Yeah. Now you know why Theatre Nova’s ensemble found so much potential for craziness in presenting this as a panto.

And while the ensemble combines storylines with an aim toward streamlining Sugar Plum Panto, it’s still confusing at times (and thus tough to “plug into”), and at 90 minutes, it felt overlong.

But if you asked my kids, none of that mattered. They happily scrambled to gather candy that the cast tossed to them; they giggled, and booed and hissed at the Mouse King; they sat spellbound watching magician Jeff Boyer do tricks for a few minutes (each Sugar Plum performance includes a special local guest appearance); and they both shot their hands up in the air, angling to press a pie into one of the players’ face.

Briggs, as Clara, carries the heavier load vocally, singing a good number of R. MacKenzie Lewis’ original songs for the show, including a celebration of girl power called “Kick Butt.”

Morrison and Marquis, meanwhile, get an extreme workout doing lightning-quick costume changes offstage, as they play several key characters. Becky Fox designed the costumes with these quick changes in mind, clearly, but it’s nonetheless tough for Morrison to switch from Frankenstein’s monster, to vampy, busty, flirty Tante Drosselmeyer — with a large, curly white wig, glittery cat-eye glasses, and Santa-themed, full-length ensemble — to the nutcracker, with a fur shako hat, a military jacket, and tights. Marquis, meanwhile, has to sport lederhosen while playing Clara’s brother Fritz, pull on a dark wig, wings, and an undersized tutu as the show’s Southern-fried Sugar Plum, and dress in black with a plastic rodent nose, glasses, a wig, a crown, and a cape when playing the Mouse King.

Yes, you can see Morrison and Marquis catching their breath at times, and still getting themselves settled into costumes, but they’re all in, and it’s all part of the fun. Director Carla Milarch has a solid grasp on what the overall feel of a panto show should be, inserting slapstick (via a wordless sausage-making bit that’s all about physical humor) and humor that young and old alike can relate to (opening gifts that are less-than-thrilling), while set/lighting designer Daniel C. Walker provides the show with an appropriate playground, complete with fireplace, a window frame, and a decorated Christmas tree. Finally, Melissa Freilich effectively choreographed the various battles that unfold on stage, making the fights suggestive, but not realistic enough to upset kids.

And entertaining kids, of course, is what the panto tradition is about – so if you want to check it out for yourself, head to Theatre Nova.