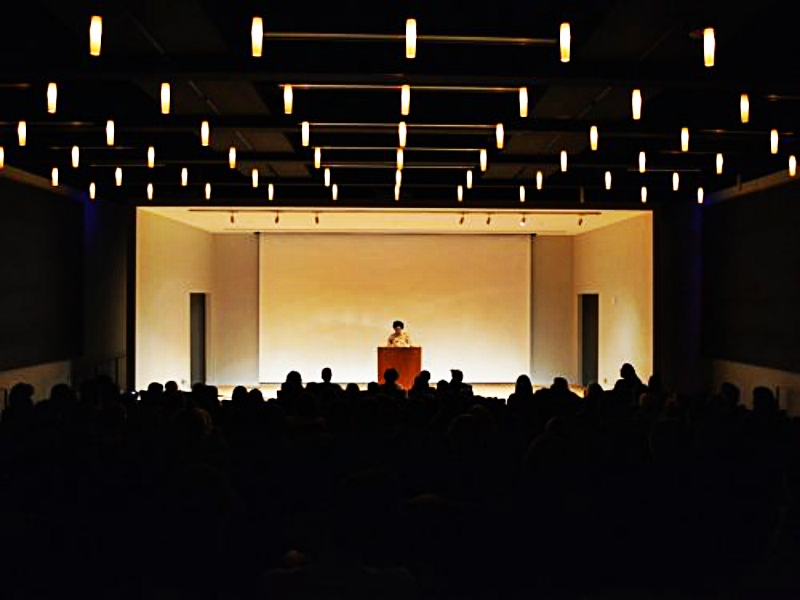 Bestselling author Colm Toibin’s November 2016 reading/talk in Ann Arbor -- part of the U-M’s fantastic Zell Visiting Writers Series -- drew a big enough crowd to not only fill all the 185 seats in UMMA’s Helmut Stern Auditorium, but also the wall end of both side aisles and the back wall.

Toibin, best known for his novel Brooklyn, the basis for an Oscar-nominated film, was one part of ZVWS’s star-studded lineup for fall 2016, which also included Everything I Never Told You author (and U-M MFA program grad) Celeste Ng and Tony Award-winning playwright/actress and Michigan native Lisa Kron (Fun Home).

“That was a large turnout for one of our readings, but not unprecedented,” said Douglas Trevor, director of U-M’s Helen Zell Writers’ Program, in reference to Toibin's event.

With big and/or rising literary stars on the roster, and increasing community awareness of the series, Trevor and HZWP assistant director Maya West (who oversees the reading series) should probably expect more full houses in future.

“Our list to date is pretty incredible,” said Trevor. “We really hope and strive to provide more opportunities for literary engagement in Southeast Michigan.”

“And we’ve cast a wider net with our marketing, especially in the last year or two,” said West, who noted that Literati has partnered with the series to be the bookseller on-site while also including the readings on the indie bookstore’s event calendar.

You might wonder if Chicago-based philanthropist Helen Zell’s 2013 gift (via the Zell Family Foundation) of $50 million to U-M’s graduate creative writing program -- on the heels of her “seed funding” gift of $10 million in 2004 -- is driving the vibrancy of the series, which offers 8-10 author events each semester (fall and winter). The answer is “yes,” but the series is only one small part of the generous gift’s scope.

“The lion’s share provides a tuition waiver for all of our students and supports our students being here for a post-graduate third-year residency, on a stipend,” said Trevor. “It basically turned a two-year program into more of a three-year program.”

U-M’s MFA program -- originally launched in 1982 -- was already considered to be one of the best before Zell’s generous gifts, but it has since established itself on most lists as the No. 2 training ground for writers, second only to the storied Iowa Writers’ Workshop at the University of Iowa. More than a thousand applicants compete annually for 22 spots in U-M’s program, which was understandably renamed the Helen Zell Writers’ Program in 2013.

Those talented students, as well as faculty, submit nominations for the reading series. “Rising second-year students can invite one fiction writer and one poet,” said West. “There’s no guarantee that we’ll get the person they want, but it at least helps us generate a list of options.”

Of course, U-M writing students get to spend additional time with the visiting writers throughout the day of the reading via craft lectures, roundtable Q&As, lunch, and dinner, etc. And this is part of what makes U-M’s program strong.

“Sometimes, our students are getting feedback on their work from someone who made them want to be a writer,” said Trevor. “And sometimes, it might be from an incredible writer they’re not familiar with, but the feedback can just as valuable. … An amazing thing happens when you demystify the process of being a writer. And the more contact our students have with people who make up that world, the better they’re able to imagine themselves as part of that world.”

For a more information and complete list of dates and times, visit the Zell Visiting Writers Series events page.