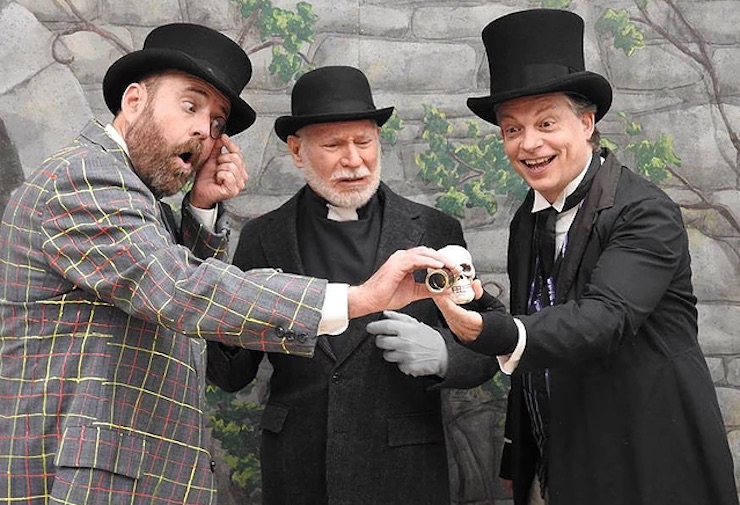 This weekend, the University of Michigan Gilbert and Sullivan Society (UMGASS) presents their fall production of The Sorcerer at the Lydia Mendelssohn Theater. I love Gilbert & Sullivan, but I've only seen The Sorcerer a few times over the years, so I was eager to see what UMGASS would bring to the show that established the template for more famous G&S operettas.

While UMGASS focuses, to my delight, on relatively traditional productions of these hallowed works, they always bring a little something new, and in this production, Artistic Director Lori Gould has taken the rather bold step of adding a new character. I stowed my pitchfork after it became immediately clear that the addition of a comedic Sorcerer's Assistant was a brilliant choice, adding lots of laughs and clever moments without taking any untoward liberties with the source material. Don't get me wrong, there are definitely some liberties being taken, but all in the audience agreed that such liberties were entirely toward.

A long-lived community repertory company like UMGASS has a lot of talent and experience to draw on, and the cast is filled with UMGASS's usual mix of townie regulars in supporting roles and fresh-faced student leads. The highly talented Adina Triolo turns in another excellent performance as Aline, particularly strong in Aline's more independent moments. Chris Kendall nails the self-righteous send-up of aristocratic idealism as Alexis Pointdextre, smarmily mugging his way through every scene, and matching the formidable Triolo's vocal power.

UMGASS regular and UM Law professor Don Regan makes for a great Sir Marmaduke Pointdextre, and if he's been pigeonholed into playing the equivalent role in each UMGASS production, well, it's because he excels there. Lee Vahlsing impressed me last spring as Bill Bobstay in Pinafore, and he does an excellent job with the lonely vicar Dr. Daly. Also notable is Jeff Spindler, in a very funny bit part as the aged Notary, complete with a perfectly crooked judicial wig.

David Andrews as the Sorcerer himself, J. W. Wells, truly steals the show. It's a great role requiring a big personality, and Andrews sells the character outstandingly well, pulling off some of the trickiest patter of the Gilbert-and-Sulliverse at breakneck speed in one of the performance's most delightful moments. The newly-invented sidekick you never knew The Sorcerer needed, played in a Teller-esque by Pat Johnson, is such a natural, entertaining, and valuable addition to the production, you'd never know it was sacrilege.

Of course, the pit, the crew, the chorus and the set are all the outstanding quality that has earned UMGASS the reputation for excellence they've developed over 70 seasons. This weekend's production is as far from the founding of UMGASS as the founding of UMGASS was from the 1877 premiere of The Sorcerer! Don't miss this chance to see this local treasure's production of an underappreciated operetta. As The Times declared in 1898: "The Sorcerer is very far from having exhausted its popularity."

UMGASS presents The Sorcerer continues December 9, 10, and 11 at the Lydia Mendelssohn Theater. Tickets are available at Brown Paper Tickets or at the door.