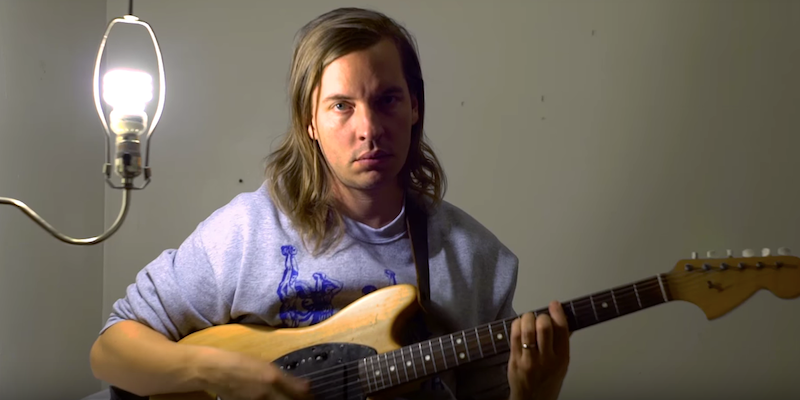 Fred Thomas doesn’t evoke regular feelings among his listeners. His smart, wordy songs have grabbed listeners’ emotions for two decades as a solo artist or in bands such as Saturday Looks Good to Me, City Center, and a slew of others.

Thomas is an Ann Arbor native, but over the last decade he's bounced between Portland, New York City, and everywhere in between. But we’ll always claim the prolific songwriter, whose music veers from urgent indie rock to recumbent soundscapes, as our own -- even if his current home is Montreal, Quebec.

He’s just too talented for us to let him go completely.

Thomas has a new album, Changer, coming out January 27. Two tunes have been released so far -- the stripped down and emotionally biting guitar song “Brickwall” and the electronic “Echolation” -- but for “Voiceover,” the third song released into the wild, Thomas made a video.

The clip features Thomas deadpanning his way through strumming a guitar as scenes of everyday activities -- fixing your hair, turning on a lamp, etc. -- are repeated over and over to hammer home that even the smallest moments contain moments of beauty even if everything in the greater world feels like it’s going to hell.

We’ll have a longer feature on Thomas closer to when Changer comes out, but we did a quick chat with him about the making of the “Voiceover” video:

Q: Where was the video filmed and who came up with theme?
A: The video was directed by Noah Elliott Morrison, a Detroit-based photographer/visual artist. He conceptualized the entire thing and it was shot in and around his house over the course of a single day. We both talked about the intentions behind creating a visual companion piece to the song, both trying to communicate a sense that there are deeper emotional currents always running through the mundane, repetitive, and forgettable things that make up our days.

Q: Does the video relate to the song in the sense that the "regular feelings" you sing about are equated to the redundant, everyday mundane activities we all engage in? Whereas when you sing the line about how in your dreams you get all the beauties to visit you and in your clearer moments remember the power of a song -- such as Sonic Youth’s "Dirty Boots" video -- all of which help alleviate those "regular" feelings?
A: Well, yes and no. In a strange way, the revelatory bliss of relating to a Sonic Youth video when you're 15 and then remembering how pure that feeling seemed when you're all grown up becomes a cycle of "regular feelings" as well! The song is a mourning for lost friends and the general feelings of losing ground that a lot of people have been living under for the past few years. It's ultimately a hopeful song, trying to remind the listener that even the most mundane-seeming moment -- or times of what feels like dire, relentless ugliness -- can hold some promise.

Changer comes out January 27, 2017, on Polyvinyl Records. You can preorder it here.