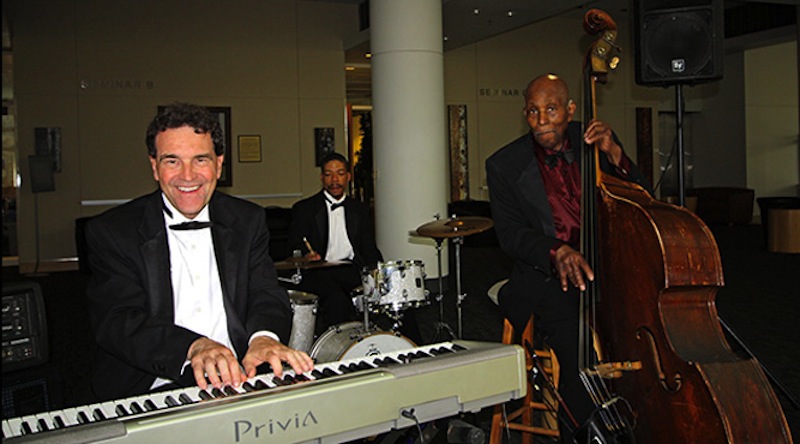 Ann Arbor is well known for its wide variety of ethnic restaurants. From South American, Caribbean, Asian and African cuisine of all stripes, the offerings are all high quality. But very few of these venues also feature any live music, much less classical or jazz.

So, when you think of jazz being played at an Ethiopian restaurant, your first thoughts might turn to the long-running Ethiopiques CD series that did so much to promote the Ethio-jazz style throughout the world.

But at Ann Arbor’s the Blue Nile restaurant, you won’t hear Ethio jazz, which was created by vibraphonist Mulatu Astatke and mixes traditional Ethiopian music with jazz, funk, and Latin rhythms.

Instead, every Friday and Saturday night, the restaurant on 221 E. Washington Street offers top-notch music courtesy of Louis Johnson and a small ensemble of rotating musicians who pull from the Great American Songbook, Brazilian music, the repertoires of Duke Ellington and Horace Silver, and many other jazz standards.

“I'm always trying to challenge the musicians to play something different, and they always rise to that challenge,” Johnson says. “I can't stump them.”

Jazz has been a staple at the Blue Nile going back to a time when saxophonist Doug Horn played there several years running prior to Johnson's current stint, which is going on five years.

In addition to piano, which is his main instrument at the Blue Nile, Johnson is also known as a saxophonist and flutist. Bassists Will Austin and Gary Allen are his able accompanists, with Allen occasionally playing guitar. This combination is classy and elegant no matter the configuration or who shows up on any given weekend.

It is Johnson's background in a variety of different art and popular music styles that takes these presentations to a level well beyond what some might term “dinner music.”

The multi-instrumentalist’s ability to effortlessly flow through different styles is due to diverse and rich student background. “My thing at that time involved playing jazz and classical music,” he said. “I'm not alone in terms of straddling the fence.”

Johnson obtained a degree in music performance and philosophy from Kalamazoo College, studied at the Paris Conservatory, holds French diplomas in music, and has performed and recorded around the world. He has also explored the lesser known classical saxophone repertoire.

During and after his student years, Johnson continued to make musical connections throughout the region.

“I ran into famed jazz pianist Claude Black at a jam session in Muskegon and then legendary bassist Will Austin. Claude was a very important guy for me,” he said. “He introduced me to drummer George Goldsmith and electric bassist Melvin 'Skull' Jackson. That stemmed my connection with the Detroit musicians. I also worked with bassist Jeff Halsey and saxophonist Doug Horn from the Grand Rapids area, and we all worked in Toledo.”

Originally from the western side of Michigan and a musical family, Johnson played frequently with Black, toured Japan with the Brazilian pianist/organist/orchestrator Walter Wanderley, and worked with renowned Colombian pianist Edy Martinez.

Moving to the Detroit area in the mid-’80s, he co-founded The Motor City Beat with members of the Motown Records session band The Funk Brothers -- keyboardist John E. Griffith and drummer Richard “Pistol” Allen -- along with jazz bassist Don Mayberry. Johnson played sax in the group, which played popular music, Motown, theatrical songs, jazz, and blues.

When Johnson moved to Ann Arbor for law studies, he took some of the Funk Brothers with him for a regular gig at Woodruff's Grove in Ypsilanti. But when Griffith couldn't make all the gigs, Johnson started playing piano more. “For the most part I was with John, Will on jazz [bass], and electric bassist Larry Walton on the funk stuff. Pistol and Jim Ryan were the drummers. I had some extraordinary guys to work with, especially during a steady gig at The Whitney [in Detroit].”

But Johnson may be best known to Ann Arborites for his philanthropic charity, the Jazz for Life project, which raised a good amount of money for the underprivileged in Ann Arbor, Detroit, and Milwaukee during the 1980s and 1990s. Max Dehn, former director of Eclipse Jazz, was Johnson's business partner in Jazz for Life before heading to Cleveland to lead the Cuyahoga Jazz Festival.

Back to Johnson’s Blue Nile ensemble, Gary Allen, now in his 80s, is the premier bass player in Mid-Michigan, lives in Stockbridge, and has had stints with Anita O'Day, saxophonist J.R. Monterose (on his CD In Action), and Al Jarreau (on his first album).

While living in Cedar Rapids, Iowa, Allen switched over from guitar to bass and then worked with Al Jarreau and singer Betty Anders. “I had a couple of gigs with Jon Hendricks, Larry Vuckovich,” Allen said. “[And] one of my best influences was [saxophonist and trumpeter] Ira Sullivan. He left a lifetime stamp on my brain. I traveled with Les Elgart, locally with Flint jazz drummer Joe Freyre, multi-instrumentalists Jeff Hall and Sherman Mitchell.”

With Johnson, Allen plays primarily electric bass guitar. “I haven't played guitar with Louis just on saxophone in a long time,” he said. “Occasionally he'll bring in a drummer. As far as acoustic bass, it's such a muscular, clawing instrument and the guitar is lighter and more fluid, so it's difficult to switch back and forth. It's like these trumpet players that also play sax like Ira and Jeff Hall -- I don't know how they do it. You've got to be two different people.”

When Allen plays guitar, it’s an orchestral archtop steel string acoustic he's owned since 1955, and teams with Will Austin at the Blue Nile as a duo.

Whatever the lineup of Johnson’s Blue Nile ensemble, he takes advantage of the restaurant’s beautiful grand piano and the room’s superior acoustics, to bring his stellar band’s balanced, relaxed musicianship to add an ambiance to the scene that’s unlike any other local eatery, even rivaling that of The Earle.