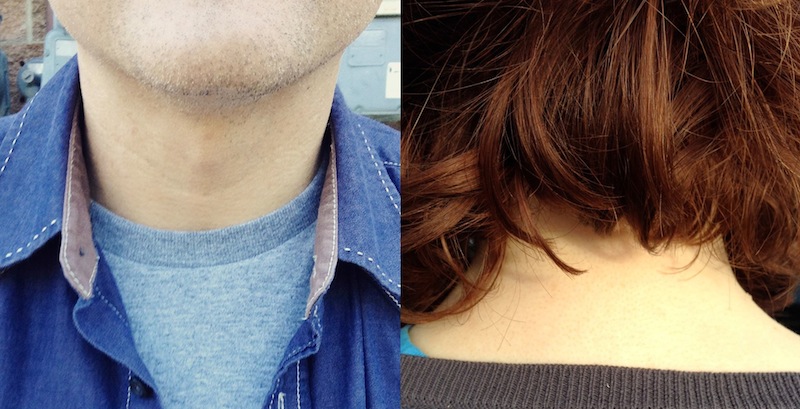 Santa Monica Swim & Dive Club are back in denim.

See the rest of our Mittenfest coverage:
→ Overview of the festival with music samples
→ The Belle Isles interview
→ The Avatars interview
→ JUNGLEFOWL interview

Blue Jeans takes the minimalist hooks of Buddy Holly, marries it to the stomp of glam rock, and sweetens the deal with just enough indie pop to make it a super-fine hybrid of genres and eras.

Formerly known as Santa Monica Swim & Dive Club, earlier this year the group came out with its first full-length album, Songs Are Easy, under the new-ish name Blue Jeans. The group recorded it with Ann Arbor superstar Fred Thomas (Saturday Looks Good to Me, etc.), and he kept the cymbals-free album stripped down and crunchy, just like vocalist-guitarist Tim Sendra, bassist Heather Phares, and drummer David Serra intended.

Blue Jeans, we just met a band called Blue Jeans -- well, at least Phares, who answered some questions for Pulp before the group plays the final day of Mittenfest.

Q: What’s the significance of your new name? Why did you change the old name?
A: We used to be called Santa Monica Swim & Dive Club, but we got tired of typing it and/or explaining it. Also, randos from Santa Monica kept liking our Facebook page. A simpler, almost generic name seemed like a better idea. Something easy to Google.

Q: Did you come to your sound organically, or did you decide to form the band with a specific sound in mind?
A: It’s a little bit of both -- Tim wanted this project to be different from his previous bands, but working with different people and experimenting made the change organic as well. Listening to a lot of simple, direct pop like The Archies and Felt was inspirational; so were the basslines on King Tubby and Who albums. Basically, the idea was to make pop music without a lot of strings attached and maybe write some songs that people liked.

Q: What’s one thing that would surprise a listener of your band -- either an influence we don't hear in your songs, or something outside music that informs the band's sound?
A: We love a lot of classic heavy metal and hard rock! Black Sabbath and Thin Lizzy were just as important as Buddy Holly and The Go-Betweens in our musical development.

Q: The album “Songs Are Easy” came out in June of 2016. Are you working on recording any new stuff?
A: We’re almost finished with our second album. We've been working again with Fred Thomas at Backseat Studios and it's going really well. The record is a little darker and more complicated, less summer and more autumn. We'll be playing a bunch of songs from it on New Year's Eve in case anyone wants a preview.

Q: Mittenfest is a benefit for 826michigan, an organization that works with young people on writing and creative skills. Were there any organizations or mentors early in your music/creative/professional career that encouraged or influenced you?
A: Fred Thomas has played a large role in the band's development from the very beginning, when it was just Tim making hissy demos on his broken 4-track. He's been supportive every step of the way, always gives us advice when we need it, plays on all our records, and basically has helped us grow into the band we are today. His experience as a musician and with the recording process isn't something he hides away; he shares his skills and positivity with as many people as he can, whenever he can.

Liz Grapentine is a desk clerk at AADL. An Oakland University graduate with a major in Music Education and a minor in English, Liz enjoys the arts in every form. Liz is also a true Ann Arbor townie and a proud patron of the library since 1995.