Might As Well Jump, Jump, Jump: Igor and Moreno's "Idiot-Syncrasy" 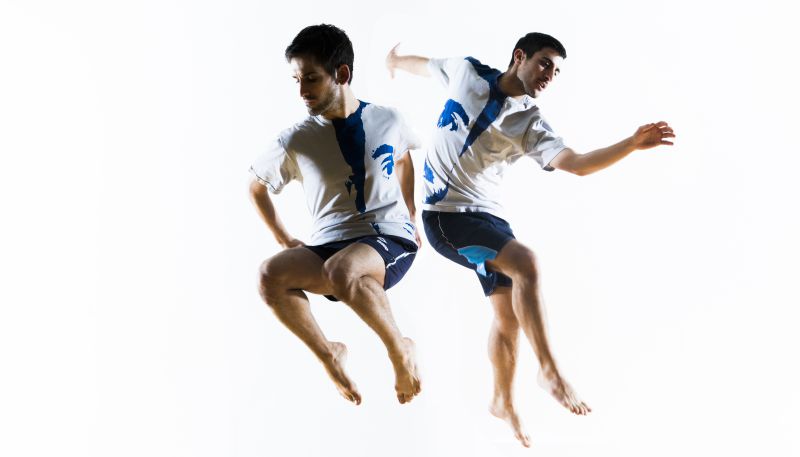 You know what that sound is? It’s jumping. Not just a jump, but jumping -- ongoing.

Maybe you have a muscle memory of trampolines, or a visual memory of kids’ games, or an ancestral memory of the bouncing that shows up in so many folk dances, but you know jumping. And Igor Urzelai and Moreno Solinas -- the London-based dance duo known as Igor and Moreno -- are counting on that, counting on our shared understanding of sustained thmpf thmpf thmpf for the success of their show Idiot-Syncrasy, which has its U.S. premiere at the Arthur Miller Theater this weekend, sponsored by http://ums.org/performance/idiot-syncrasy/University.

Igor and Moreno bounce throughout the show, with their jumping being a simple strategy to bring the group -- them and us, the audience -- together. We all tap into the shared pulse; we feel it together, in synchrony. The jumping, like a pulse, becomes a bass line for other, more nuanced activities Urzelai and Solinas carry out. And when that jumping keeps going and going, we understand that, too. We know about endurance and about exhaustion, so we’re right with them when what had been something playful becomes something more serious and powerful when it “spirals to a darker place.”

The streamlined nature of Idiot-Syncrasy’s central premise -- just two bodies, singing and dancing and jumping -- came originally from an economic crisis in 2013 when they made the work. There was a desire, and a financial imperative, to do “more with less,” to strip down to very simple means. “You really only need a little for something quite big to happen,” Solinas said.

So, Igor and Moreno turned to folk dance traditions -- Urzelai is from the Basque country in Spain and Solinas from Sardinia, Italy -- and began developing the bouncing movements they found there. They also invested what resources they did have in their artistic collaborators rather than in materials, resulting in Idiot-Syncrasy, which has garnered numerous accolades abroad.

Urzelai notes that while the particular economic situation that originally gave rise to the work has stabilized, the global crisis seems to have increased over the past year: “The work continues to be relevant, or it's acquiring new relevance. … Choreographically, it’s the same, but the motor behind it changes a little bit.”

He and Solinas speak earnestly about the jumping and all that it connotes for them: “We’re talking about perseverance. We’re not talking about repetition as something idiotic,” Moreno said. For them, the “idiot” part of their title refers to something more idealistic, the idiot as starry-eyed fool rather than dunderhead: “It refers to the dreaming, like the dream of changing the world," Urzelai said. But Moreno also concedes, “depending on how much you persevere, you can soon feel like a bit of an idiot.”

Both men understand jumping in terms of physical metaphor. On its own, a jump is “the most lively of the physical actions we can do. It is the opposite of lying down still. It requires energy,” Moreno said. A jump is vertical, positive, empowering. Sustained over time, jumping is about persistence and commitment and “getting through stuff," Moreno said.

And the duo finds that that action sustained over a really considerable time -- say, the three and a half years and 80-plus performances over which they have been performing Idiot-Syncrasy -- leads to change. As choreographers, they are done tinkering with the work; its structure has gelled and is the same with every performance now. Buty what has changed quite radically is that now, as performers, they have “head space and physical space to really play with the way that we connect to the audience,” Urzelai said. They are now so familiar with Idiot-Syncrasy that they can respond in the moment to the energy of each new audience they encounter. Their performances become dialogues as the duo adjusts the pacing of their transitions and the quality of their stage presence -- drier? more warm and welcoming? -- in response to physical cues from the audience.

The performance becomes a collaboration, with everyone in the theater participating. “The idea of togetherness, it’s what matters. Us on stage and all of us in the theater -- we haven’t given up the idea of going to the theater, of dreaming a little bit more. But also the society … we think that together, we know better," Urzelai said.

Igor and Moreno perform Idiot-Syncrasy January 12-14 at Arthur Miller Theater. Visit ums.org/performance/idiot-syncrasy for times, tickets, and more information. There will also be pre- and post-show discussions for the January 12 show. If you can't make any of the performances -- or just want to watch it again -- the January 14 show at 8 p.m. will stream at ums.org/igor or facebook.com/UMSNews. Feel like jumping into the dance? Igor and Moreno are leading a free master class at the Ann Arbor YMCA on January 14 from 2-3:30 p.m.; register here.