Good Vibrations: Civic Theatre's "In the Next Room" promises more stimulation than shock 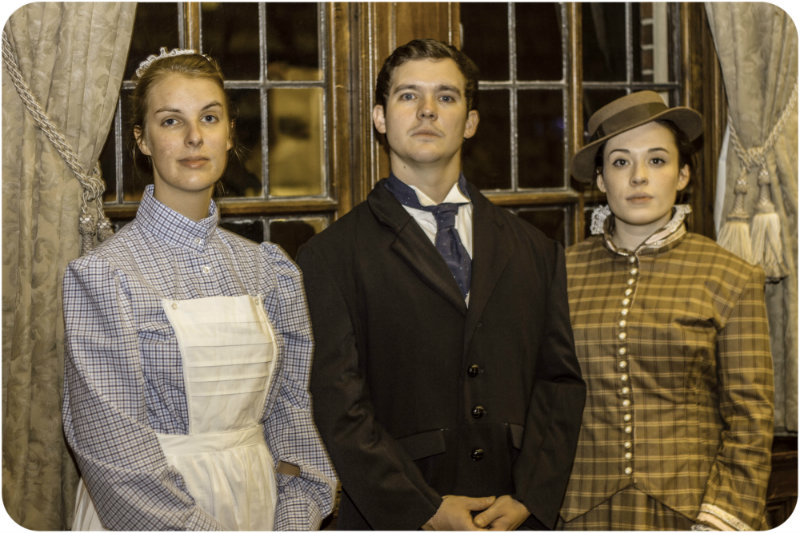 That look when the play's characters see the electrical device in the next room giving out good vibes.

On Monday, the cast and crew of the Ann Arbor Civic Theatre production of In the Next Room were busy with final preparations at the Arthur Miller Theatre, where the play opens Thursday.

The cast was doing a run through while director Melissa Freilich was busily taking notes and getting the perspective from every angle around the Miller’s thrust stage. The crew was making last minute adjustments to an unusual set and working with the sophisticated Miller Theatre lighting -- house lights, spotlights, lights on stage, mood lights.

“Sarah Ruhl is one of my favorite playwrights,” said Freilich. “I think she writes some beautiful and really emotionally connected works. ... It asks us to imagine ourselves in this different situation in the 1880s when women were being treated for hysteria and yet the characters are so relatable. The situation seems so absurd to a modern audience. But I love a work that hooks us emotionally and then gets us to think.”

Freilich moved to Ann Arbor from Cleveland last year to teach the Alexander Technique, a therapy that uses movement to relieve tension and promote body awareness. She also came to town with a theater background having majored in theater at Washington University in St. Louis. Since moving to Ann Arbor she’s used her movement training to choreograph fight scenes for several local productions, including Civic’s recent production of Othello.

Freilich said it’s hard for a new director to get a chance to stage a play, especially in a competitive city like Ann Arbor and she’s grateful for the opportunity.

“It’s hard to take a chance on someone you don’t know, but Civic has a truly open application process,” Freilich said.

The play received a warm critical response when it played in New York and has been performed across the country with success. The New York Times critic Charles Isherwood wrote in his 2009 review, “In the Next Room illuminates with a light touch -- a soft, flickering rather than a moralizing glare – how much control men had over women’s lives, bodies, and thoughts, even their most intimate sensations.” 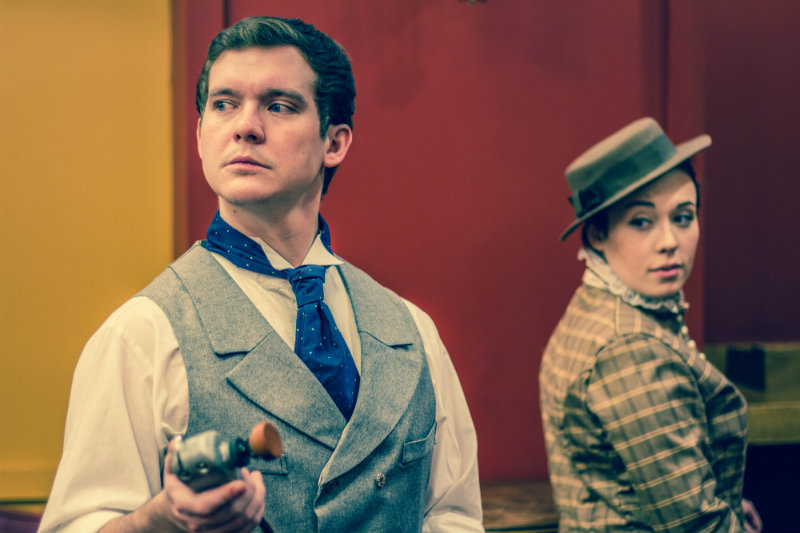 She's got her eyes on the electrical prize.

The play concerns a forward-looking young doctor who is using the new fangled vibrator to “cure” women of hysteria, which is pretty much any female behavior that men find disturbing or inconvenient. The doctor has a wife who has recently given birth to a daughter and is struggling with her own feelings. The play also deals with a couple of the doctor’s patients, his seemingly stoic nurse Annie (Ellen Blanchard), and a nursemaid Elizabeth (Maegan Murphy) who gives the play another perspective beyond the middle-class characters at the center. (Also in the cast are Joseph McDonald as the artist Leo, Amanda Photenhauer as the most transformed patient Mrs. Daldry, and Roby Roy as her domineering husband.)

“It asks a lot about how we seek to relate to people. It’s about treatment for hysteria, but it’s actually not a play about sex but a play about wanting to connect with other people,” Freilich said. “It’s about what we can use to do that. In the play, electricity has just been invented and the characters are wondering how it’s going to change their lives and it seems so relevant from a modern perspective because we’re talking about how computers are changing our humanity. How does it help us connect with others or how does it separate us.”

“If you interest them and ask them fundamental human things, I think it’s like a trap. It lures you in with its title and you realize what you’re seeing isn’t scandalous,” Freilich said. “It’s not showy, it doesn’t work like a strip club works or something like that. It asks you to look at people and think about how you would feel.”

After the usual nervousness, the cast has taken the unusual subject in stride. Freilich said it was important to treat the medical procedure seriously and not in a titillating manner which would be counter to the play’s intent.

The modern Dr. Givings is played by Greg Kovas, who has to adjust his modern sense of male-female relations with the norm of the late 1800s.

“Initially reading the script, you have some visceral reactions to what is happening especially as the doctor. When first reading I noted them and thought that’s weird and that’s weird,” Kovas said. But he had to put his reactions aside and adapt Giving’s perspective.

It is Dr. Givings who thanks Thomas Edison because he sees himself as a modern man in tune with the wonders of electricity, especially for his gynecology practice.

“Dr. Givings is very pro-new treatments and very pro-electricity. He’s very much an inventor, loves the march of science and invention as it pertains to medicine,” said Kovas. “He thinks of electricity as a healing force in itself.”

But modern thinking stops at his office door.

“In his personal life, he is definitely a little sexually prudish. He doesn't like to talk about personal things with anyone else but his wife. He’s a man of his times,” said Kovas.

He is also trying to maintain control over his wife.

“I’m trying to find my role in the household as mother and wife and the doctor’s wife. I want to have a part in his practice, I’m not sure what that is,” said Abela.

Abela said the bulky, many-layered Victorian garments she wears were helpful in getting her into character, “getting to that role through your body.”

Abela said she was not uncomfortable with the plays sexual themes.

“I think it’s so important to be discussed,” she said. “The show talks about women and women’s sexuality and putting it into the 1880s was a good choice on Sarah Ruhl’s part. It was a time when women weren't considered at all.”

Abela said that she hopes audiences go away with a good laugh, but also with also some insights into women.

“It has so many important messages about what it means to be a woman and to be a family and to be in love and to find your place, not only in society but in yourself," she said. "I feel it’s such an important thing because there is not just one place a woman belongs."