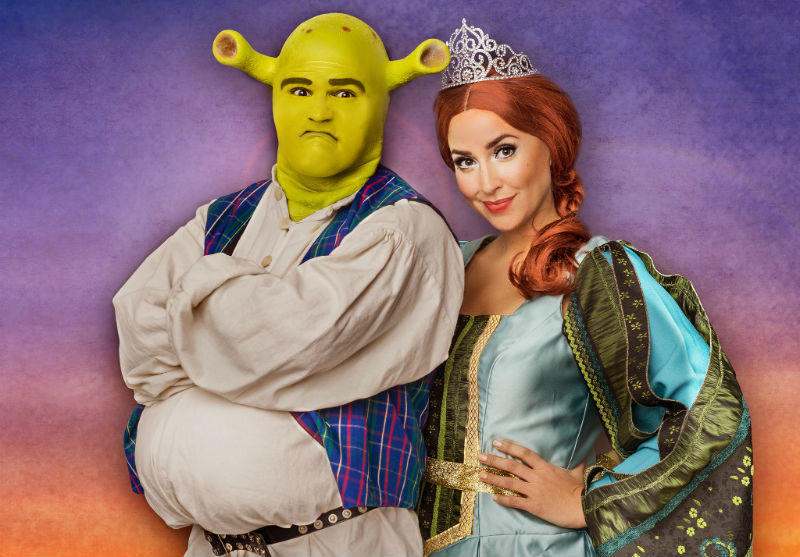 The Burns Park Players bring a cartoon to life. Photo by Myra Klarman.

“Sometimes an actor goes, ‘I’m on call for heart surgery. I may have to leave because of that,’” said Matt Kunkel, who’s at the helm of BPP’s upcoming production of Shrek. “And it’s like, they all put in more work [in rehearsal] because they don’t know when they might have to go, so rather than giving 100 percent, they put in 125 or 200 percent. And when they’re not there, they’ll meet with someone the next day to learn everything they missed. It’s a very professional group. They’re incredibly hard workers.”

These performers aren’t professional actors, of course. They’re Burns Park students, parents, teachers, staff, and neighbors who come together, working both on stage and behind the scenes, to put on a big musical each winter. Money raised by the production goes to support arts programs in the Ann Arbor Public Schools.

“I love the idea of … adults and kids coming together to do a show, which is one of the reasons why we’re doing Shrek,” said Kunkel, who’s currently studying directing in U-M’s department of theater and drama. “We take the whole thing, and we set it in a library … so we have the adults telling the story of Shrek to elementary school kids, and the world of Shrek just comes to life.”

BPP’s team of producers first approached Kunkel after he co-directed Ann Arbor in Concert’s production of Hairspray last May.

“We’ve been striving really hard to make it not your typical community theater production, in terms of how it looks and feels, and the design of it,” said Kunkel. “So we’re striving to go as far as we can with it.”

Kunkel noted that while the medium of film can use editing, digital effects, and different kinds of shots to tell a story, theater demands a different kind of creativity due to its earthbound limitations.

“Limitations force you to figure things out, like how you can visually represent something on stage,” said Kunkel. “What I think is awesome about theater is, you can take something as beloved as >Shrek, this famous movie that’s had three sequels, and what do you do? You come up with your own representation of Shrek on stage … or a dragon and the audience gets to fill in the gaps.”

Shrek the Musical, with music by Jeanine Tesori (Fun Home) and book and lyrics by David Lindsay-Abaire (Rabbit Hole), premiered on Broadway near the end of 2008.

Adapted from the blockbuster 2001 movie -- which was inspired by William Steig’s 1990 picture book -- Shrek tells the story of a curmudgeonly green ogre whose peaceful, isolated life in a swamp is disrupted by the arrival of banished fairy-tale characters. Looking to restore his old lifestyle, Shrek journeys (with a sassy donkey sidekick he finds along the way) to complain to Lord Farquaad, and the two arrive at a deal: if Shrek can deliver Princess Fiona, whose tower is surrounded by lava and guarded by a dragon, to Farquaad for marrying so he can be king, then Shrek can have the deed to his swamp.

“I was looking at the shows that Burns Park Players have done in the past,” said Kunkel. “There’s Hello, Dolly, My Fair Lady, Guys and Dolls -- they’re all real musical theater classics, and I love them. But I thought, this time, let’s do a contemporary show because it’s such a different style. I think this will be the first one that Burns Park Players has done that’s been written in the last 10 years. But I really wanted to challenge the company to try something new, both for the group itself and for the community.”

One thing that will be in keeping with past BPP productions -- which have been happening since 1984 -- is young students will be no small part of the production.

“It’s great to have kids in the show because -- especially in the political climate we find ourselves in now -- it tells them that it’s OK to be different and unique and that embracing that is a wonderful, wonderful thing,” said Kunkel.

If you want to see the show’s message conveyed live, though, you’d better make a reservation soon.

“I’m really, really excited for people to see this show,” said Kunkel. “[The tickets] have been selling like hotcakes.”

“Shrek the Musical” plays at Tappan Middle School on February 3, 4, and 10 at 7:30 p.m., and February 11 at 4 p.m. Tickets cost $15 for reserved seating and $30 for patron seating (with parking), available at showtix4u.com. For more information, visit burnsparkplayers.org.