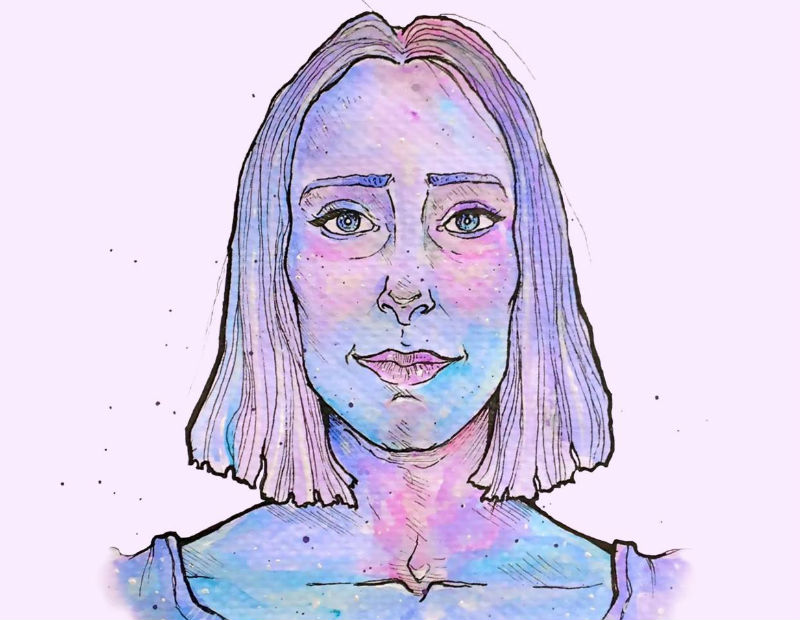 The art and artistry of Tanner Porter defies boundaries. Self-portrait by the artist.

As a member of the Celtic/Quebecois/American folk-meets-classical quartet Ensoleil, cellist Tanner Porter takes old songs and makes them contemporary through creative arrangements.

But as a solo artist, Porter plays her own compositions, which are thoroughly contemporary because of the creative arrangments.

The U-M grad composes the songs and arrangements with notation software, so even though her classically steeped art-pop sounds loose and jammed with details, it doesn't happen through randomness. The woozy blend of strings, piano, wind chimes, marimba, vibraphone, harp, woodwinds, and more are carefully plotted out with specific players in mind.

Porter's first album, 2012's The Child Wrote a Poem, is written like a 15-chapter book set to music. Her latest, 2016's The Summer Sinks, is a song cycle about hurt and redemption, and the music is even more fragmented and quirky than the sounds on her debut. But Porter's flexible voice, which can sound as delicate as a bird outside your window or as ferocious as a crow cawing on your shoulder, shapes the songs through elastic Joni Mitchell-like melodies and her smart, raw lyrics keep your ears attuned to the tune.

With a bachelor in music composition and a minor in creative writing, Porter combines the two disciplines with excellent results. But she's also a visual artist, hand drawing her brand new video, "II," the second promo clip in support of The Summer Sinks.

Now splitting time between her native California and Ann Arbor, Porter talked to us about her solo work, compositional process, the "II" video, and what's on tap for Ensoleil.

Q: You've described The Summer Sinks as a song cycle. What inspired the overall theme? The lyrics sound very personal -- and pained many times. Was it hard to be so emotionally open when writing the words?
A: I think mostly in The Summer Sinks I wanted to try and ask questions that were on my mind. How do we deal with past injuries, those done to us and -- perhaps, more importantly -- those we’ve done to ourselves? What happens to our sense of self when we let pride and shame shape us; what happens when we give power to others, when we lease our identity out to be informed by those around us; what happens when we are made strangers to the things we love? The feeling of returning to a place, person, or memory you once cared for and not recognizing it, or seeing its flaws for the first time, is challenging -- especially when you’ve been looking at these things through a lens of nostalgia. So on this album I also wanted to ask, how can we forgive and reclaim ourselves? So many songs have been written about the experiences of loving, losing, and finding the strength to move forward. But people keep writing them because these experiences happen over and over again. Musically, the album begins where it ends -- with wind chimes -- because even after all is said and done, even after we’ve learned something, we may very well find ourselves right back where we started. In this and other ways, the album functions as a cycle, with “Landlord” at the center. “Landlord” was the first piece recorded for the album, about a year before the rest of the songs. The first and second halves of The Summer Sinks are based on the first and second parts of this song.

Q: Your songs are arranged in such interesting ways -- almost obscuring how they might have been originally composed. Do you write the music on piano? Guitar? Cello? And how do you then go about deconstructing the songs and making them into these strange and fluttering finished products that still hook the ears?
A: Well, I’m certainly glad that you enjoyed the arrangements! It’s funny that you ask this! I’m a cellist and vocalist, and when I first started composing, I did it on the cello. At this time, I was writing parts for myself to layer up and play in recordings, but my approach has changed quite a bit in recent years. While I still use the cello and often rely on my voice for melody writing, I now compose directly into the computer using music notation software like Sibelius. Creating all the facets of a piece -- the melodies, lyrics, and arrangements -- is often one big jumbled step for me -- for better or for worse, I suppose! For the most part, all of the arrangements you hear on the album were how the songs were originally composed. I had specific players in mind who I hoped I might have the chance to work with on this project, so I curated each instrumentation according to them, and then wrote the pieces within these parameters.

Q: The second video from the album, "II," was drawn and directed by you. What inspired you to go with animation and what did you want the visuals to add to the music and lyrics?
A: As someone who enjoys working in multiple art forms, I’ve found again and again that music is one of the best platforms for bringing together different artistic mediums. I’m a visual artist and have always loved animation -- especially hand drawn -- so putting together the music video for “II” was a real treat. One aspect of the video that excited me was the chance to animate the quiet spaces in the music. At the start of the video, color is first introduced in moments of silence between the phrases. Visually, I wanted to explore the feeling of trying to fall asleep, but every time you get close you are pinpricked by little drifts of memories. I drew the frames on tracing paper; the backgrounds are made of watercolors and fabric, which I scanned into the computer and layered together using Photoshop and After Effects. “II” is the first in a series of videos I will be releasing throughout the year. I’m currently working on another animated piece, which also involves mixed media.

Q: I think of Kate Bush, Joni Mitchell, and Joanna Newsom in terms of how you use your voice. You're not scared to be textural and let the voice go to the edge of the melody rather than stay spot on. Who are some singers who have inspired you?
A: Wow, needless to say, I’m honored to even be included in a sentence with such absolutely extraordinary artists. Joni Mitchell has always been an enormous inspiration; her voice and musicianship are of course beyond compare, not to mention how impactful her lyrics have been for me and an untold number of songwriters. Artists like Joni Mitchell and Paul Simon taught me that lyrics are poetry and that singing can be conversational, as did the works of Stephen Sondheim, though it was after hearing Andrew Bird’s setting of Galway Kinnell’s “First Song” that I really became interested in songwriting. I grew up listening to a range of incredibly luminous singers, from Broadway legends like Audra McDonald to folk icons like Joni Mitchell and Judy Collins, and later on was fortunate to be introduced to the incredible Jean Ritchie; I have huge admiration for the women of the folk-revival era, and a great deal of respect for contemporary artists like Joanna Newsom and Anaïs Mitchell whose works and voices bring to mind the power of traditional ballads and storytelling through song. As for Kate Bush, I’m embarrassed to say that it’s only recently that I’ve started listening to her work! But man, is her voice incredible. I would also be remiss not to mention that I studied voice with two wonderful teachers while getting my degree in music composition from U-M, Dr. Katie Calamuggio-Donner and baritone Luke Randall, and before attending U-M I studied with vocal coach Julia Holland.

Q: Any updates on Ensoleil?
A: Ensoleil has just welcomed a new member to the group, the immensely talented Nicole Patrick -- also a U-M grad -- who is joining us on percussion! We are currently working on new material, and gearing up for a second album and a 2017 tour, which will very likely include a show or two in Ann Arbor!

Q: Do you still live in Ann Arbor? Playing any shows in the area, either solo or with the group?
A: I graduated from the University of Michigan in 2016, and since then have been going between Ann Arbor and California, where I’m from. I’m hoping to have some shows lined up for the late spring or early summer, both solo and in collaboration with local groups, as well as with Ensoleil!