Catching the University of Michigan’s bicentennial spirit, the Department of Dance’s student concert, Glancing Back, Dancing Forward (at the Power Center through Sunday), celebrates the Department’s own history and breadth.

A lobby installation -- designed by Stephanie Brown, Elizabeth Benedict, and Jessica Fogel -- chronicles the early days of dance at the U. There are pleasingly nostalgic photos of clogging and “aesthetic dances” in gossamer dresses out on the lawn, and excerpts from an early phys ed manual featuring line drawings and directions for calisthenics. Come the 1930s and '40s, we see the shift to “modern dance” in photos of earnest young women in Martha Graham-influenced dark jersey skirts.

Before the performance in the theater begins, the lobby is filled with dancers bringing these images to life. Choreographed by Department Chair Fogel and local tapper Susan Filipiak, this pre-show presents its examples of early-20th-century dance in overlapping layers. This results in sometimes odd but historically accurate juxtapositions, such as smiling, overalled tappers beside a stern woman in a high-necked ruffled blouse with a whistle.

The dancing is most satisfying if you have already had a chance to look at the photography and narrative starting on the right side of the exhibit. Here is where the timeline is clearest, and from where the dancing in the lobby draws its direct inspiration. The left side of the photo installation abandons chronology and shows instead evidence of the Department’s scope, with sections addressing, for example, the Cultivation of Creativity as well as Professional Connections.

The concert itself demonstrates that scope. The first half is a collage of bite-sized dances by faculty choreographers, showcasing the diverse aesthetics present in the Department. This diversity not only provides a challenge to the student dancers’ versatility, it’s a programmer’s dream -- a smorgasbord with something to satisfy almost any audience member’s dance tastes. 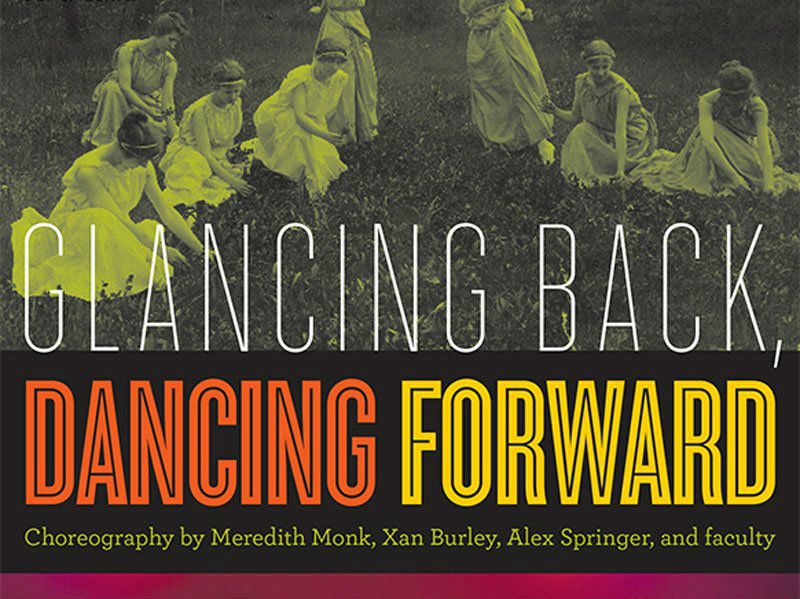 For the most part, the student dancers master whatever their teachers ask of them; the dancing is often at a professional level. Most memorable are Luna Lemus-Bromley’s silky turns and easy compliance with both gravity and her partner, Johnny Mathews III, in Missy Beck’s The Reveries (2006), and the unflappable clarity with which Chloe Gonzales, Madeline Joss, and Izzi Wayner fulfill Bill De Young’s sculptural choreography in Double Canon; Epitaphium (2017). Choreography by Peter Sparling, Robin Wilson, and Amy Chavasse rounds out Glancing Back, Dancing Forward’s faculty collage.

Works by outside professionals -- renowned choreographer/composer Meredith Monk and U-M alumni Xan Burley and Alex Springer -- comprise the second half of the concert. I was wary of Monk’s suite from Quarry: An Opera in Three Movements (1976), restaged here by Paul Langland. How could excerpts, set on a student company, live up to the reputation of Quarry, the Monk opera from which this suite is taken? Quarry is known as both a groundbreaking theatrical work of music, movement, and image, and a portrayal of the rise of Nazism, rendered powerful by insidious shifts in tone over the course of the opera’s three movements.

I forgot all that when the lights came up on Karl Ronnenberg as the Dictator (Al Evangelista on Saturday and Sunday), standing on a platform grimly draped with gray bunting. He rants and proclaims, his words reverberating through a microphone. He’s not speaking a recognizable language but, like a computer-animated Minion gone mad with power, his meaning is clear; it’s a message of ignorant, sneering hate. His Henchman (Mathews on Friday, Ronnenberg on Saturday and Sunday) lowers the mic, and I wonder what part of his body is going to speak now. Sure enough, his pelvis thrusts, but he also slashes, carves, and grapples with the air in repeating patterns, a gestural echo of his speech. Suddenly finished, he descends from the platform and I imagine him sending out an angry Tweet once he’s exited.

Mysterious black and white footage of a quarry separates the Dictator’s speech from the final excerpt, the rally. Here, the stage is filled with dancers in gray street clothes, grimly executing a sequence of deliberate lunges, thrusts, and rolls. They accompany themselves with Monk’s trademark vocalizations: here, a forceful and incessant, "Huh!" Another group in gray marches through and among the first, carrying signs that bear model airplanes and hats rather than printed verbal messages. They add strings of faster "Ha-ha!" and "Hey!" to the soundscape. A third group threads their way through the now crowded stage, holding hands and as they step and lean and sway in unison. Their particular inarticulate song intensifies the vocal counterpoint already in progress.

Into this melee bursts a whirling woman, Paula Modafferi (identified in the program, I notice after the show, as Spirit of War). She wields a knife and has a bloodied bandage wrapped around her head. She careens and pitches through the throng, and suddenly the Henchman is there, too. The two are allied visually by the rusty hue of their clothing, contrasting the gray that prevails across the rest of the stage.

By the time the wild woman’s progress around the stage is complete, the other dancers are all in synchrony. They lunge and roll and "Huh!" together, three groups dissolved into one. They are united, too, in their ultimate collapse to the floor. A trio in trench coats makes its way through the debris of panting humans, delivering suitcases to some of them. Suite from Quarry concludes with this eerie implication, that these people will leave on a journey they hadn’t planned.

This suite is so effective in large part because of the dancers’ command of Monk’s movement and music. Considering the many other successful dances in Glancing Back, Dancing Forward, the Department of Dance has ample reason to celebrate.

"Glancing Back, Dancing Forward" runs through Sunday, February 5, at the Power Center. Visit music.umich.edu for tickets and more information.