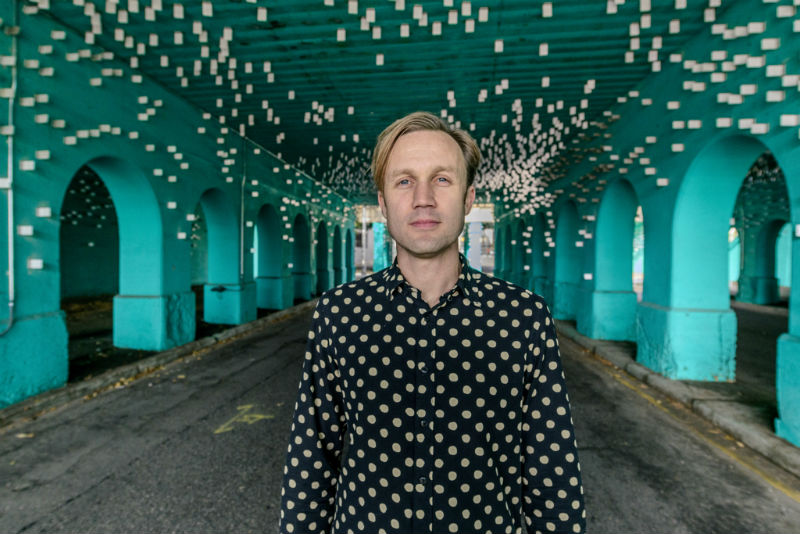 Q: I read that you started your first band back in 1989 when you were in seventh grade.
A: Yeah, I’d been playing guitar for a year or two by then, and could put a few chords together, so I started nagging my friends about it. We were called All the Young Dudes, I think, after the David Bowie song. … I remember bugging a bunch of kids to try and raise money for a snare drum for our drummer. I think we raised $14. And then I’d say to one of my friends, “So, do you want to play bass? You should tell your parents you want a bass for Christmas.” … One of our early gigs was playing at this Enrichment Week thing in the gym of Lindbom Elementary, which was where I’d gone to school, and these kids thought we were The Beatles or something. We were these seventh graders playing for fourth graders and they were just screaming their heads off. We thought, “This is great! We’re rock stars.” I don’t think I’ve ever had crowd screaming like that since. I guess I peaked early.

Q: What had gotten you so excited about music from an early age?
A: Music was always a big thing in my family. My parents were enormous fans. Just like I did later, they went to a lot of concerts. They’d seen The Beatles play at Comiskey Park. And my brother, who’s four years older than me, he was getting into cool stuff, bringing home hair metal and Dead Milkmen records. And there was folk music -- Neil Diamond and John Denver and stuff. So there was a real mix, but I took to it, and pretty quickly everything else -- well, I won’t say everything else became irrelevant, but music became one of the most important things in my life. 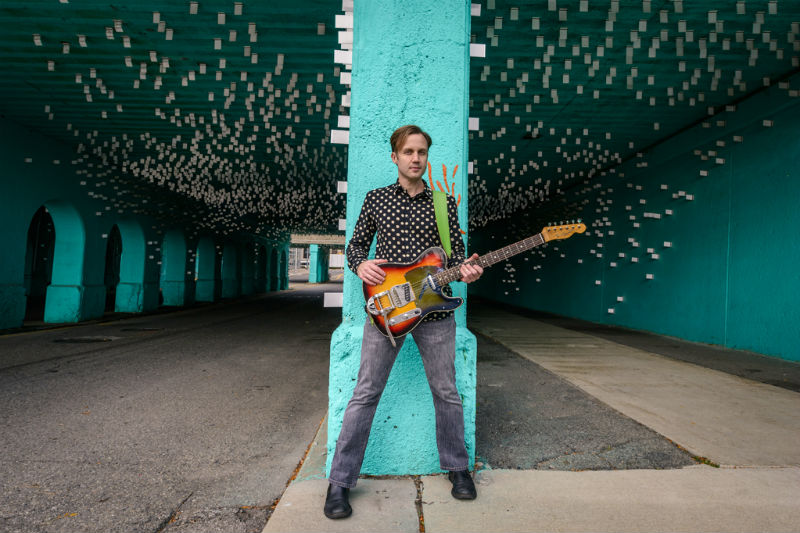 Timothy Monger's just walking around, holding an electric guitar, under a bridge, as one does. Photo by Doug Coombe.

Q: You used a Kickstarter campaign for Amber Lantern, after having great success crowdfunding your previous solo album New Britton Sound in 2011. Two of the reward options for that first campaign were going birding with you or going running with you. Did anyone take you up on that?
A: No, no one did. One guy … settled for having a drink, but no one wanted to go birding or running with me. … Doing a cover song of their choice seems to be the most popular reward. I’m still working on them from this last Kickstarter.

Q: The lyrics on Amber Lantern suggest that lately, you’re thinking a lot about approaching middle age and making peace with where you are while still striving.
A: It’s more personal than anything I’ve ever done. There’s certainly some personal work on all my albums -- I lean toward introspection and reflection -- but this was really therapeutic for me. As I approach middle age, I’m definitely reconciling the past and the present. … There’s some nostalgia on this one, but I think it’s more about how I feel now and looking forward as well as a self-examination in the present. I also tried to reflect that a little in the music. It’s a little less sepia-toned, with more modern instruments. Well, I say that, but there’s a hurdy-gurdy in the first track. But that’s me. I tend to mix the new and old.

Q: On your website, the first thing you see is a Herman Melville quote -- about how sadness and a foul mood signal that he should go back to sea -- that’s paired alongside new song, “Grey’s End.”
A: I added that [quote] after my fourth attempt at finishing Moby Dick. I love that quote, with its “damp, drizzly November in my soul.” … “Grey’s End” is a song about coming out of a depression, and coming back from the ledge and to joy and happiness, and I thought of that quote. Taking to the sea seemed like the right metaphor for the journey of the song, about finding your way back. And I also love anything maritime, like sea shanties, and all kinds of nautical concepts.

Q: It’s ironic that for so many of us, Moby Dick is our literary great white whale -- the book we never finish.
A: I’ve certainly read things that are more difficult, or less gripping. Maybe we have this preconceived notion that it’s going to be difficult, because it’s widely acknowledged to be, and we psych ourselves out and never finish it.

Q: I understand that every song you write has its own point of entry, so tell me about how the album’s opener, “Plough King,” got started.
A: A melody. It was originally a finger pick -- another quiet, folky finger pick -- and I can’t remember the original set of lyrics. I went through three or four sets of lyrics, which I don’t usually do. But my girlfriend and I were still living in Britton, on a farm, so I was in, like, a 10 by 10 carpeted bedroom with all this equipment, and it was in the middle of winter. And I remember I was listening to Love and Rockets, and there’s this sparseness to their sound. I wondered what happen if I completely dis the guitar and do a song with completely different instruments, and put the emphasis in different places, like the fuzz sample that you hear throughout the song and an organ, and remove the guitar entirely. And the final lyrics came at the same time. I was looking out the window and thinking about how a person re-creates the world in their own image, and then I started imagining a guy stealing a plow truck, driving around and making roads in all the wrong places, where there were none before.

Q: Your label is Northern Detective. What’s behind the name?
A: I’m just a big fan of detective novels. For years, I’ve had this idea about writing a concept album or a musical with a noir detective story based in Michigan.

Q: You’ve probably heard that the Blind Pig is for sale. What’s your take on Ann Arbor’s live music scene these days?
A: I’m getting older, so I’m less involved with the cutting edge of it. But ever since I started playing music in and around Ann Arbor in the early '90s, the main venues were the Blind Pig and The Ark. They’ve been the two national touring venues for different kinds of artists. Occasionally you’ll see someone at a University venue, or some house shows, or someone will try and revive the Heidelberg, but I don’t know. If the Pig goes away, I think it will be a huge loss for this community. And in Ypsi, there’s no more Woodruff’s or Elbow Room. If there’s not a touring rock venue to bring people in, those bands that would skip Michigan will just hit Detroit or not come at all. … So I hope someone buys the Pig. People complain because it’s a classic, divey, smelly nightclub, but it’s exactly those places that are the lifeblood of the touring circuit in the Midwest.

Timothy Monger’s CD release party for “Amber Lantern” happens at The Ark on Wednesday, February 8 at 8 pm. Tickets are $15. Visit theark.org. Monger returns to A2 on March 25 at the Ann Arbor Distilling Company.