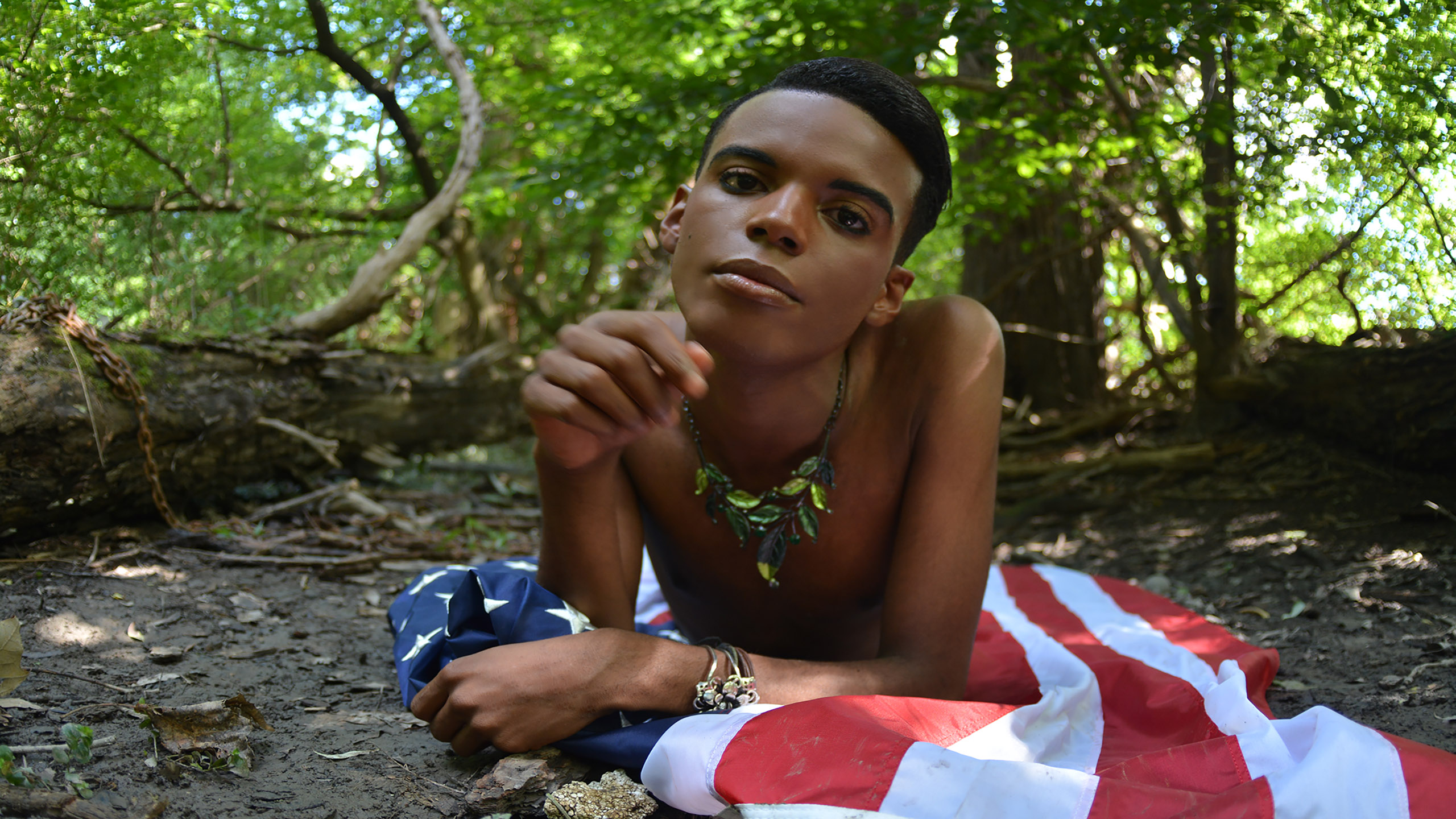 "Taking on" can mean a couple of things, of course, and Duane seems to mean both senses, as in playing the part while sticking his tongue out at it. The music and its maker are dressed up in a cute postcard of post-war Americana, but biting lyrics like, "nigger and faggot are just words to be played … and I'm a winner man!" are anything but.

At 19, Duane's original incarnation as The Teenage Weirdo drew the attention of Jack White's Third Man Records and U.K.-based XL Recordings, before clashes with the latter led him to scrap that project to become The Brand New Dog. Both featured a dance-driven sound and androgynous, animated style favorably compared to Prince, Grace Jones, and David Bowie's '80s output.

As the Jet Black Eel, Duane's working with a band for the first time to produce an EP of glam-rock and twang-fueled political and social critiques. He's already put out a couple of excellent singles, and last month saw the debut of the first video, "When the Eel Accepts Your Invitation," featuring the new look and sound (as well as a blackface mime rolling around on an American flag with a denim-clad Duane).

On Thursday, February 9, Duane and his group will play Grove Studios in Ypsilanti. It's his first appearance in these parts since 2012 and only the sixth time fronting his new backing band.

Q: How is this new iteration of Duane different from The Brand New Dog and The Teenage Weirdo?
A: The Teenage Weirdo was me being fresh out of high school and expressing my love for lo-fi '80s synth-pop and performance art on stage around Detroit. The Brand New Dog was me being a young adult getting serious about his music and expressing himself through '90s-inspired house/techno music.

Q: What made you want to work with a band this time around? How has that dynamic affected the way you write and perform, and how did you go about putting the group together?
A: For each incarnation of Duane, I want to do something drastically different. Before, I was doing electronic music and performing with just props, video screens, and dancers. For this project, I wanted it to be a full live band. It's American-inspired rock music, so it's gotta be the classic rock setup: drums, bass, guitar, etc. I got my backing band together by just asking mutual friends. I'm so appreciative of them helping me out. They each have their own main bands/jobs, so for them to take time out and learn my music is just the sweetest thing.

Q: Have you played out with this lineup yet, and if so, what are the shows like? I've only seen you once, at the Hamtramck Labor Day Festival in 2015. It was a great show, partly because of a seemingly spontaneous wrestling match of sorts with a destroyed umbrella. I'm wondering if you'll still make room for that kind of thing in a band situation?
A: I've played with my live band about five times before. I also include a backing singer and a dancer (the black face mime performer from the music video). Sometimes I have the whole show with me, depending on the event. For this performance, it's gonna be just me and the band -- no dancers/singers -- but I'll still keep it very cute and theatrical as I can.

Q: Tell me about these two latest singles, "Catch Me If You Can (This Eel Be Slippin' On)" and "When the Eel Accepts Your Invitation." What inspired the lyrics as well as this new glam rock and twangy sound? Will the rest of the EP you're working on continue in this vein?
A: I'm not a big rock-music fan, but that's my favorite type of rock music for sure -- the classic glam-rock sound. When I took on this project in January of last year, it was right after Bowie died, and I remember seeing news stories about Kanye [West] saying how he wanted to do a Bowie tribute album. Everybody in the comment sections of these articles were dragging the idea, but I found it fascinating. The idea of a black, non-rock musician taking on the sound of one of the most respected and revered rock legends. The twangy aspect came about because I wanted this project to be a parody of classic [Americana], so of course, some country rock had to be sprinkled into it. If I just do a straight '70s glam-rock sound, it would be more British than American.

Q: How did the video for "When the Eel Accepts Your Invitation" come to be?
A: I had that concept in my head for a good few months; it was just me finding someone to film/edit for my meager budget. Sean Barry worked on it with me in Ferndale. It actually came together surprisingly fast. I just wanted a basic video to introduce my project. There's gonna be more music videos from this project, maybe three or four more. I wanna be known amongst local Detroit musicians for doing a lot of videos/image changes.

Q: In an interview a couple of years back, you talked about getting away from provoking people just to be "bratty" and also getting a little more intentionally political. The new songs and imagery still seem plenty provocative. Can you talk a little about the difference in, say, using a swastika in a "bratty way" and using it the way you do in the video?
A: I'm extremely opinionated when it comes to politics now. This past election woke me up in 2016! But as a teenager, I had no interest. When I would use swastikas in my Teenage Weirdo work, there literally was ZERO meaning behind it. I just thought it was funny to poke fun at cultural symbols. Good and bad. I was trolling. But this time the inclusion of it was to poke fun at the hysteria surrounding this mysterious alt-right movement coming under the rise of Trump. It's scary and interesting.

Q: You came out of the gate swinging at "Trump's America" with these tunes. What effect have these last months/weeks/days had on that impulse for you?
A: Not so much swinging. More like poking fun at it. I'm not angry. I'm intrigued and a bit worried. I'm not so much concerned with what Trump is doing. I'm more concerned with what the progressive left is gonna do to band together to it take it down and build up in 2018 and 2020. Hopefully, Hillary's neoliberal side of the political spectrum won't continue to screw it up with their B.S. But I don't know. We're stubborn on all sides.

Q: I get that The Jet Black Eel is a concept, but this also sounds like who you are (i.e., "a young queer person of color taking on the classic vision of America") and what you're actually doing with this project today. So in a way, is this full-fledged concept actually a little truer to "yourself" than previous incarnations?
A: It's truer to myself in regard to me being super-interested in politics now. But as far as the look and sound go, no. Like I said, I'm not a big rock-music fan. I'm more of a pop/Top 40 and electronic music fan at heart. So me playing with musicians and writing rock songs is definitely part of playing a part. And I HATE blue denim and wearing T-shirts. I only do it for this project. I haven't owned a pair of jeans in 7 years until now! At least The Teenage Weirdo and Brand New Dog costumes were things I liked to wear on a normal basis.

Q: There wasn't a lot of "Duane news" in 2016. What else is new in your life besides music?
A: Between incarnations I take a little bit of time to put them all together. So I spent more than half of 2016 just writing and demoing out the songs. It's just me and music, my boyfriend, and working a jewelry counter in Livonia. That's pretty much my whole life at the moment.

Q: What's next for you after the EP is done?
A: Main thing is to find someone to release it, so shopping it around for a bit. But in the meantime, I'll continue to record and put out singles on my own. There are some talks about some shows overseas, but I'm keeping quiet until more details emerge from that. Don't wanna jinx it.

Duane the Jet Black Eel plays Grove Studios, 1145 W. Michigan Ave., Ypsilanti, on Thursday, Feb. 9. Doors open at 7 p.m., admission is $10, and all ages are welcome. Modern Lady Fitness and Klayton Dawson are the opening acts. Concessions will be available to buy, but no outside beverages are allowed.